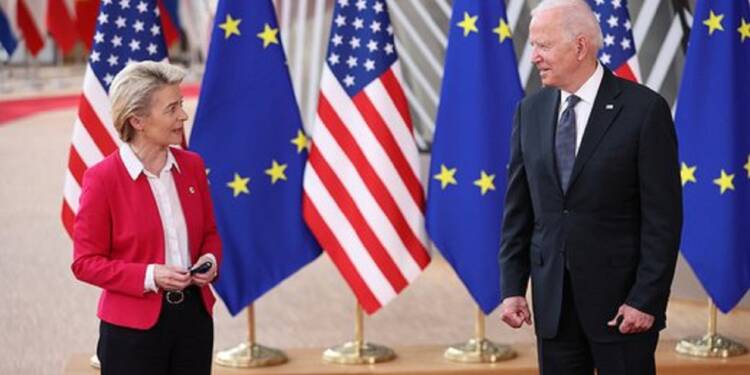 The true test of leadership is when a crisis occurs. The people look up to their leader in belief that he/she will steer them out of crisis.

But, some leaders turn a crisis into a bigger catastrophe. European Commission president, Ursula von der Leyen is one such leader. From Covid-19 crisis to Ukraine crisis, she hasn’t left a single opportunity to disappoint the bloc. Some say that her marionette reins are being pulled by  the Biden administration.

What is the major concern for Europe right now? The energy crisis.

Europe as a continent is on the verge of de-industrialisation. Several companies are running with a tight crunch of gas and are continuously facing difficulty in continuing their operations. For them, to continue their operations, they have to shift to ‘dirtier options’ like coal as the gas is not as easily available as it was before Russia’s curtailing of gas from Nord Stream 2 pipeline.

Almost half of Europe’s solid fuels like coal, that can be used to produce energy used to come from Russia. But after anti-Russia sanctions, the prices of coal have soared to record levels. With companies already facing elevated prices of raw materials to function normally, what would you expect the government to do?

Something that would ease the pressure and make it cost-friendly for them to run their operations, right?

Alas!  That is exactly not what European Commission’s President Ursula von der Leyen thinks. At a time when Europe is fighting for survival, Ursula is leaving no opportunity to make sure that Europe dies mercilessly.

The EU’s Emission Trading System (ETS) which used to cap the greenhouse emissions by factories is being used in a fallacious way by the bloc. In the absence of gas, they had to shift to coal to continue running. The ETS system will levy more charges and increase their cost of operation.

Last year, the cost of ETS permits increased by around 150%. It reached a record high of €98.49 per tonne of CO2 in February. This leads to further increase in electricity prices as the gas crunch has directly impacted the power companies. In turn, they pass on the cost to customers increasing their miseries. Countries have regularly demanded ETS to be waived off, especially at a time when the whole continent is reeling under crisis.

The second major concern is Food.

When the inflation has sky rocketed over several decades food has  also become costly. When food production should be encouraged, EU is planning something drastic. Under the guidance of “visionary” Ursula von der Leyen, European Commission has brought a law which will fastrack the approval of biological pesticides. Another step for EU’s green agenda.

Sri Lanka serves as a healthy reminder for a turn toward biological farming and how it went bankrupt. At this time, does EU need such a radical move which can jeopardise the agriculture and make them reliant on other countries?

Well, Madam Ursula von der Leyen thinks so. By exploiting her position, she’s is pushing anti-EU diktats down the throat of European governments.

Under whose guidance or directives is European Commission’s President taking such steps. Well, Ursula has blindly toed the line of Biden administration.

Biden administration used her to push its own vaccine to the continent of Europe. The Commission’s president openly acknowledged messaging CEO of Pfizer Albert Bourla about the contract in April of last year in an effort to buy Covid vaccines. But, when she was asked to publish the text messages, she declined. Later, it was revealed that no such conversation ever happened.

The fiasco put her under scrutiny and she was asked to resign. After Biden came to power, European Union has seen eye to eye with Biden administration on every global issue.

Also Read: United States comes up with a new plan to plunder Libyan oil, but Russia won’t allow it

For Washington to control Europe, the control on European Union is pivotal and what would have served it better than having the reigns to control European Commission’s President. Ursula has put the interests of Europe on backburner and her interest lies in furthering Washington’s agenda without realising the consequences of her moves on the European continent.

Why does US need to control Europe in the first place?

Well, when Trump was in power, countries like France pursued to have their own independent foreign policies and stop being the fifth wheel of US’ foreign policy. A demand for “strategic independence and autonomy” was observed in Europe.

For US, it was necessary to bring Europe back under its umbrella. Ursula von der Leyen has proven to be handy. By an exacerbating energy crisis in Europe, it will largely be reliant on US. To put things into perspective, we remind you that, 68% of gas exports of US are sent to Europe. US is aiming to replace Russia and even aims to increase exports to 50 billion cubic meters of gas to Europe annually by 2030. It’ll make Europe largely reliant on US. Similar is the case in food by bringing green agenda to lessen Europe’s food production.

Therefore, Ursula von der Leyen has been used as a tool to control Europe by Biden administration. If she is not removed from the office soon, Europe will be dismantled. And we have already witnessed a lot of European countries going anti-EU because of autocratic policies. So, EU better adopt a course correction, before she causes further damage to the continent.

35 Feeling Defeated Quotes: Is It Normal to Feel Defeated?