So, civil wars have officially started in Europe. Czech Republic is the first one to fall 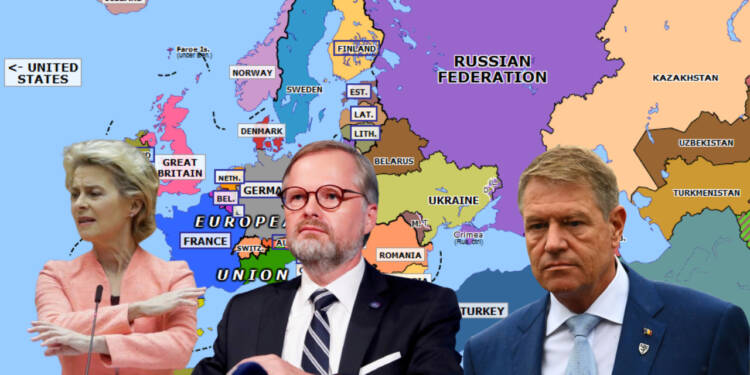 The downfall of European Unity is finally here. TFI has long warned that the EU’s senseless involvement in the Ukraine War will have disastrous results.

Governments are falling like a house of cards. Bulgaria came first, followed by Italy. But now, a complete domino effect is about to begin. Europeans have started to take to the streets against EU and NATO and now, total chaos is on the cards.

According to the New York Post, dozens of Czechs have erupted in anger against the EU and NATO for their terrible actions during the Ukraine war.

More than 70,000 demonstrators, yes, 70,000 Czechs, have expressed their anger against the Czech government in Prague, urging the ruling coalition to take action against rising energy prices.

Although, the government saved its face, the result of the motion of No confidence did not satisfy the majority. Hours later, 70,000 protesters stormed areas near the parliament in Prague and Wenceslas Square in the city center.

The protesters blamed NATO’s action for the increase in gas and electricity prices in their country and criticised the government for joining the EU sanctions against Russia.

Furthermore, most of these protesters were of different ideologies. There were supporters of the right-wing, left-wing, and even communists.

All of them shared the same objective: to call for change, particularly in addressing the problem of energy prices,  which have completely wrecked the country’s economy. There was only one clear message for Petr Fiala, the prime minister: either quit or fix the flaws.

Raising slogans against the EU and NATO, the protesters demanded military neutrality, resumption of direct gas supply contracts with Russia, and denial of permanent settlement to Ukrainian refugees.

For those who don’t know, the Czech Republic is a member of both the European Union and NATO. Furthermore, the nation has remained one of the ardent supporters of Ukraine. Given that the Czech Republic presently holds the rotating EU presidency, these protests have a very significant meaning.

These demonstrations show how dog-tired the Czechs are by the war in Ukraine. The general public is anxious and concerned about their future. Recently, inflation has reached its highest in 30 years and is expected to touch 20% in the coming months.

Due to this, the Czechs are feeling the brunt of the Ukraine war more than anyone else.

The Czechs also have a difficult relationship with Ukrainian refugees. Results of a public opinion survey published on June 30 had shown that support for Ukrainian refugees was dropping among Czech respondents compared to when the Russian invasion began.

Although Prague rejects the protest as being crafted by the Russian propaganda machinery through its sympathizers, they are overlooking something bigger here. Because of Brussel’s foolish decision to impose sanctions and go entirely against Russia, there is increasing dissatisfaction among the masses throughout Europe.

These protests were one of the biggest demonstrations against the EU and NATO in recent times and that too, after the Ukraine war.

Furthermore, it’s not like the EU had no idea that all this will happen. Germany’s Interior Minister Nancy Faeser had issued a stark warning about potential protests throughout Europe due to rising energy prices.

Over the past few months, small-scale protests against rising inflation and energy prices have seen a rise. In Poland, car owners blocked the petrol pump to show their discontent against the Polish Government.

As a result of the inflation rate reaching its highest level since the 1980s, citizens in Ireland started shouting slogans. Protests were also held in Rome, Paris, and Belgium.

The leaders that first advocated for Ukraine, such as Mario Draghi and Boris Johnson, have already resigned from their roles due to the already dire circumstances developing in Europe.

Now, Europeans have finally taken up arms against the EU and NATO.

Read More: Protesting farmers in Netherlands wave German flags—It is the endgame for the EU

Those who play with fire perish by it. Brussels should have minded its own beeswax instead of caring for Ukraine. This growing anger of 70,000 Czechs suggests that the EU, which was sitting on a powderkeg has now officially caught fire.

A domino effect would soon become visible. There will be more protests across Europe before a harsh, gloomy winter. Finally, doomsday has arrived for Europe.

After Prairies provinces, Atlantic provinces rise up against dictator Trudeau