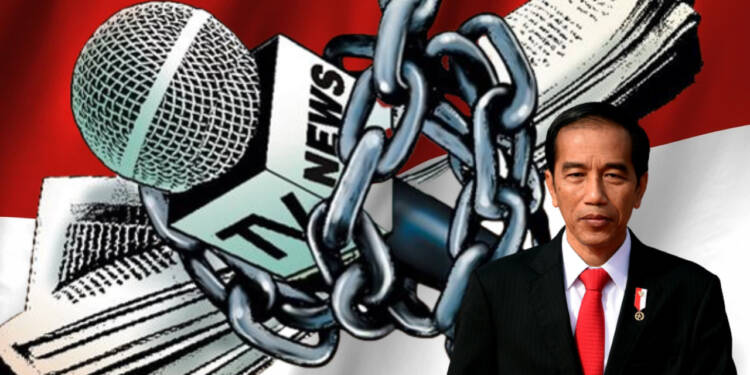 Independent journalism is one of the pillars of an efficient democracy. However, Indonesian leader Joko Widodo seems to have a different opinion. Widodo is on a spree to transform Indonesian politics and not in a positive sense. The populace is rising up against the wannabe dictator which would possibly be the end of the party’s (PDI-P) rule in Jakarta.

Ironically, Widodo’s party – Indonesian Democratic Party of Struggle (PDI-P) promotes a liberal ideology and inculcates the principles of secularism in its agenda.

Journalism: A crime under Joko Widodo?

The Alliance of Independent Journalists (AJI) has identified 19 articles in the draft criminal code of Indonesia that could criminalize the work of journalists. If passed, these new provisions could stifle press freedom ahead of the 2024 elections.

To replace the outdated version of Indonesia’s contentious Criminal Code (RUU KUHP), which has been in effect since 1946, a new draft has been made public.

The draft regulation comes in the aftermath of some older regulations that are already in place – namely the Information and Electronic Transactions (IET) Law from 2008 and the Content Moderation Regulation from 2020. These regulations are already infamous for suppressing freedom of expression. If passed, the new code would also quash freedom of the press and expression.

Widodo’s administration has shown signs of detachment from democracy before when it pushed for the controversial revision of the Corruption Eradication Commission (KPK) Law in 2019 and then the passage of the omnibus Job Creation Law. The two legislative products had triggered mass protests.

Imprisonment as a reward for speaking the truth?

Expressing his concerns about the un-democratic regulations, AJI Chairman Sasmito said, “The Draft Criminal Code is the most threatening regulation. With these 19 problematic articles, it shows that the government is ignoring the protection of press freedom and freedom of expression,”

19 articles in the proposed draft have been identified that could put journalists and citizens in jail. This includes a 5-year sentence for insulting the president/vice president, one and a half years in prison for offending the government, other state bodies, and courts, and several years’ imprisonment for defamation.

In addition, certain articles allow for the prison sentences of journalists for periods ranging from six months to four years for publishing inaccurate or incomplete reports that cause riots.

In particular, the draft violates the Siracusa Principles regarding legal restraints, which are fundamental human rights law principles. Additionally, it goes against the idea of defending free speech when it comes to criticizing public officials.

Read More: Duterte needs to follow ‘The Widodo Doctrine’ if he wants to save Philippines from China

Joko Widodo has reportedly tried to bring about the bill to control the media and stop them from undermining the ruling party’s claim to leadership in the next elections in 2024. He understands that he is already ruling on a thin majority. The next two parties with the maximum seats – Gerindra and Golkar, which although are supporting him in the Onward Indonesia Coalition, would pull support and form their own government as soon as they have a comfortable majority.

Gerindra and Golkar, both are right-oriented parties and hold around 163 seats together in the house. Widodo’s anti-democratic move could now pave the way for the right parties to pick up the pace and form a government in 2024.

Widodo’s attempt, to criminalize journalism and enslave the Indonesian people, would surely come to bite him in the back.

Poland has almost solved its oil woes with Russia’s blessings