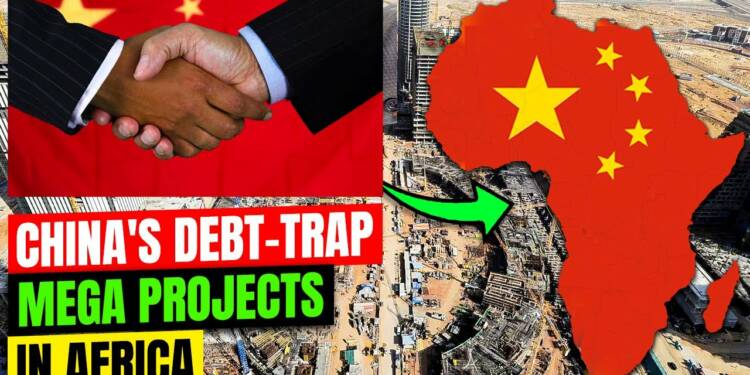 The Chinese policy of debt-trapping other smaller sovereign nations is in full-swing in Africa. One of the first victim is the African nation of Zambia. The debt crisis of Zambia is spiralling out of control. Several reports suggest that it could be the next Sri Lanka. Chinese intentions are clear. It wants to take advantage of the development deficit in the African continent and keep its economic future under its arms. To fulfil this, China gives staggering amounts of loans and entrap countries in debt to seize their assets.

China had provided huge loans for infrastructural projects to a host of African nations as part of its Belt and Road initiative. Reports show that a number of African countries have taken Chinese loans since 2000, totalling a whopping $124 billion by 2016. Zambia’s worsening debt-crisis too is due to its government’s failure to repay a US$8b debt to China.

China is now playing the hardball as it is grabbing up major state assets in Zambia. China has already taken over an International Airport, Electricity Company, and a major roadway in Zambia. Many Africans now fear whether Zambia has become a Chinese colony!  There are reports of talks between the Zambian government and China on handing over the country’s national electricity company, ZESCO to China.

Where Dr. Mumbi Seraki noted how China has successfully gained unrestrained control over Zambian resources and unfiltered immigration of Chinese into the country is causing conflicts with locals. She further notes that, since many of these deals are done in secret, the financial penalty of backing out of these projects are worse than to actually go through with it to the end.

However, Zambia isn’t the only country in Africa falling prey to China’s debt-trap. Nearly all major sub-saharan African economies are indebted to China. For instance Kenya’s 72 percent of $50 billion bilateral debts are owed to China, Nigeria recently accrued some $5 billion in loans from China, Angola too owes $21.2 billion to China and other weaker economies of Democratic Republic of Congo, Sudan, and Ethiopia have also incurred large debt from China.

This situation is alarming as most of these countries have poor economic projections for the next few years and will almost certainly have problems repaying their debts and therefore ending up like Zambia almost seems inevitable.

Also Read: The new Kenyan President is set to snatch Mombasa and other dreams from Xi Jinping

A silver lining in this dark debt cloud is a zero interest loan of $ 1.3 billion, which Zambia has received with a grace period of five and a half years from IMF.  On an in depth reading of the IMF report one can see that the terms and conditions of this loan enable Zambia to throw China out of Zambia. According to the conditions, Zambia shall shift its spending priorities from investment in public infrastructure- typically financed by Chinese stakeholders. Zambia has announced it will totally cancel 12 planned projects, half of which were financed by China Exim bank, alongwith Jiangxi Corporation. The Zambian government has cancelled 20 undistributed loan balances, 10 of which are from China Exim Bank, saving Zambia $1.1 billion over the next few years. Zambia has set

Ibrahim Anoba, an expert in the African Political Economy notes that most of the Chinese loans are spent on crucial sectors like transportation and power generation, and now Zambian government has asked China to take a back seat.

Africa possesses enormous potential which China wants to exploit, in order to fulfil its selfish motives. It’s high time other countries like Ghana, Ethiopia, Chad  among others should learn to assert themselves and follow the Zambian example.