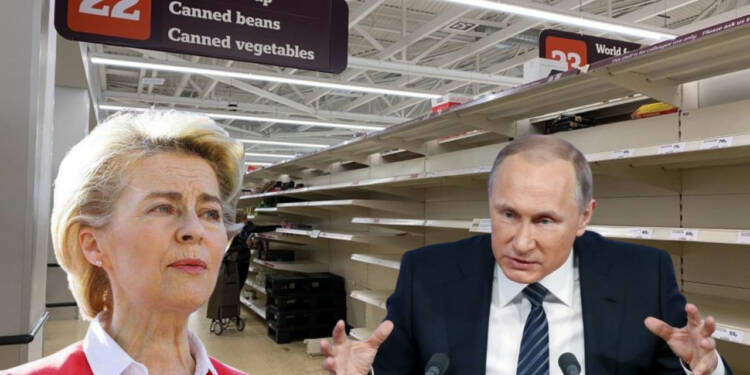 It is almost shocking to find out that the European commodity supply fortress only appeared a solid mass on the outside but in reality, was no more than a hollow body that made noise when hit hard.

A plethora of sanctions placed on the Russians by the US and EU in the aftermath of the Ukraine conflict have in turn harmed the Europeans to unprecedented levels.

Ironically, Moscow is having a good enough time with its currency performing increasingly well, low rates of energy and the lowest unemployment rate since 1992. On the contrary, the Europeans are under the grip of record inflation and are struggling with unnaturally high prices of gas. But wait, it does not end here.

The Russians have already halted the majority of their energy exports to Europe until the latter lifts the sanctions on them. Well, this is indeed terrible news for the Europeans who were already bracing themselves up for a cold and harsh winter.

Now, what could be worse than lighting candles in the freezing cold?

A majority would argue that an empty stomach accompanied with the cold breeze would maybe teach these European leaders a lesson. And guess what, a food crisis is now on the books too.

Read More: A Venezuela-like food crisis is about to hit every country in Europe

According to data from the industry association – Fertilizers Europe, Russia and Belarus provide 60% of the EU’s fertilizer, and sanctions introduced in March on imports of potash from Belarus and interruptions to trade with Russia have put significant pressure on fertilizer supplies.

Farmer organizations seem to remain very discontent with the EU-led sanctions. The cost of inputs in farming have already increased exponentially owing to the increase in the prices of oil and gas that powers the machinery used for farming.

Machinery is also involved in the harvesting season and increased energy rates lead to an overall increase in input cost. As a result, fertilizers prices need to be contained so as to keep the price of the final produce within limits.

One might wonder why the Europeans could not supply their farmers with locally made fertilizers at subsidized rates. Well, the problem here is that the fertilizer production also requires gas.

Russian fertilizer producers owing to the availability of cheap gas have an advantage over their European counterparts. As a result, European farmers would eventually be dependent upon Moscow for fertilizers at low rates.

In response, the European Commission proposed to suspend tariffs on some inputs used for producing nitrogen fertilizers – namely urea and ammonia – until the end of 2024.

But member states are yet to approve the proposal, and farmers are urging decision-makers to go further on this.

It does not seem like the European Commission would be able to take a decision far too soon owing to rigid and old systems already in place.

And well, if the European farmers are forced to grow their produce using the local expensive fertilizers, there exists a good enough possibility that the produce will be rejected by the consumers owing to the unnaturally high prices. There also exists an extreme possibility of farmer groups rising in revolt against the commission, and that could eventually force the governments to depend on Russian imports.

And we do know how depending on imports has fared for nations like Venezuela which was in the grip of an intense food crisis that traces its origins to the country’s previous governments importing food from overseas.

The whole scenario essentially highlights the naiveness of EU leaders who are in actuality giving them up for slaughter for the actions of its allies in the US and UK.

Washington and London have been on the frontlines of the economic war against Moscow and they could essentially be blamed for orchestrating the whole crisis. But, ironically, the two nations do not have much at stake at this point.

The US has a full-fledged agricultural industry and is itself a fertilizer giant. London, despite having limitations based on land area, is also known to be self-sufficient in its agricultural capacity.

It is quite evident that the only parties that are on the losing side of this war are the EU members which should rethink before they need to let go of their foreign reserves to buy wheat, corn and barley.