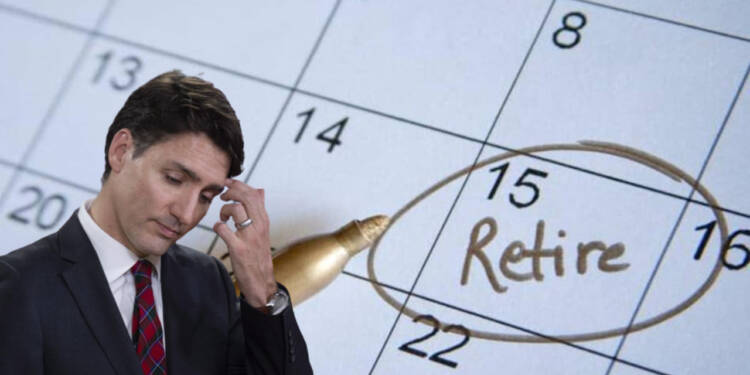 Since Justin Trudeau came to power in 2015, the banana republic of Canada has put all its eggs in just one basket- Immigration. We know how heavily Canada is reliant on immigrants to boost its economy. A massive immigration wave has hit Canada, and there is no other choice. And who is to be blamed for it? Certainly, the irrational policies of your government.

We know that developing nations today are experiencing a shrinking labor force. But the situation is particularly worse in Canada as it is probably the only country encouraging people to retire early.

Yes, you got that right. The Canadian government is encouraging its citizens to retire and choose to travel and spend more time with their families. Canada is grappling with a wave of the ‘Great Retirement’.

Canada’s labour force grew in August, but it fell in the previous two months and remains smaller than before the summer as tens of thousands of people simply stopped working. Much of this can be chalked up to more Canadians than ever retiring, said Statistics Canada.

Statscan data shows, a record number of Canadians aged 55-64 are now reporting having retired in the last 12 months.

The country’s productivity is sagging, and it will keep on dragging down until tighter retirement laws come into play. But, maybe with Justin Trudeau in the driver’s seat, the worst is yet to come.

Canada is already experiencing a mass exodus of its most highly skilled laborers. Economists believe they are leaving businesses scrambling, helping push wages sharply higher and threatening to further drag down the country’s sagging productivity.

“We knew a long time ago that this wave was coming, that we would get into this moment,” said Jimmy Jean, chief economist at Desjardins Group. “And it’s only going to intensify in the coming years.”

She added, “The risk you have, and in some sectors, you’re already seeing it, is that people are leaving without there being enough younger workers to take over. So there’s a loss of human capital and knowledge.”

As more workers leave their jobs, the labour force will shrink. This could have an adverse effect on economic development at a time when the central bank is rapidly raising interest rates to combat rising inflation, which is fueling worries that the economy will enter a recession.

But the dim-witted Prime Minister has different plans. Instead of tightening the retirement laws of his country, the country is ramping up immigration. Well, what else to do, there is no other choice left if the current situation persists. So, to counter this crisis and help drive economic growth, Canada loosened the immigration laws.

Moreover, Canada’s Old Age Social Security (OAS) believes that retirement should be voluntary. Canada is incessantly reducing the OAS pension which is further encouraging the employees to retire early and leading to a labour crunch.

You see, when Old Age Social Security (OAS) was first introduced in 1952, it was available for people ages 70 and older. At the time, the average life expectancy for Canadians was about 75 years. Today, Canadians are eligible for old age security at 65.

According to Statscan, there were 307,000 Canadians in August who had left their job in order to retire at some point in the last year, up 31.8% from one year earlier and 12.5% higher than in August 2019, before the onset of the pandemic.

Trudeau’s Canada believes that retirement should be voluntary and not be bound to any mandatory retirement age. Therefore, the influx of migrants has become a very obvious phenomenon in Canada. And if the government comes up with no plan to address this pressing issue, it will not be long before Canada will soon be run by migrants!

Ethiopia and Somalia are scripting history with a joint infrastructure project