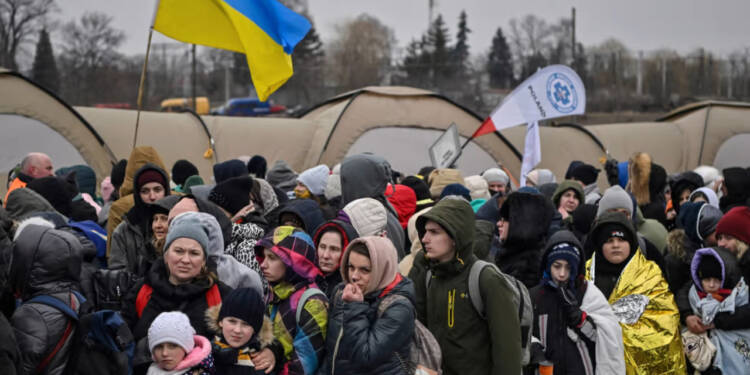 Canada has always welcomed refugees from war-torn countries. But the Ukrainians have been troubled by finding a permanent settlement in Canadian provinces. But, what is the need to worry when you have the samaritan, Mr Trudeau?

Look Ukrainians, agreed the Liberal poster boy is too busy to work out Canadian’s problems but for you, he certainly is not. Believe us! You see, he has lately come up with a plan to resolve your long-held concern of not finding accommodation owing to the pricey rental market in Canadian provinces.

Trudeau is a saviour

According to Blacklock’s Reporter, a notice by the Department of Immigration titled Accommodations: Ukrainian Nationals reveals details of how the government plans to deal with the influx of 216,000 new Ukrainian refugees.

“The Department of Immigration will be responsible for damages caused to hotel property,” the notice explained.

Housing will be provided across Canada including in major hubs like Vancouver, Toronto, Ottawa, Calgary and elsewhere.

Well, these refuge-seeking-Ukrainians won’t be limited to just luxurious rooms but also be entitled to other features like mini bars too.

“The program allows for a one-time accommodation stay of up to a period of 14 nights for individuals or families,” the notice claimed.

Read More: Living conditions in Canada are so miserable that even  Ukrainians are complaining

Major issues are being ignored

Now, all this comes at a time when Canada is already reeling under, health, food, energy, airport crisis and whatnot. And, shocking to see that Mr Trudeau is turning a blind eye to them. He has all the time in the world for other issues but ignores his own countrymen.

The country’s healthcare system is in tatters. Who is responsible for that? Obviously, Trudeau and his ‘fake hopes’ to his fellow countrymen.

Trudeau has risked the lives of a million innocent Canadians. Hospital emergency rooms are experiencing a crisis with backlogs, delayed services, and temporary closures.

Furthermore, the promise of accessibility is the cornerstone of the Canadian healthcare system. That is an unfulfilled promise to everyone who does not have a family physician. The bigger problem is that the solutions to all the aforementioned issues still remain elusive.

Both the health of individual Canadians and the state of the healthcare system are significantly impacted by the deficit. But, where is Trudeau? Certainly, missing in action.

The three essential needs for any individual’s survival are always access to food, shelter, and education. Sadly, in Trudeau’s Canada, citizens are deprived of all three.

Crisis in the Canadian economy

However, the Canadian economy is currently in ruins. Almost every industry is having problems, from the housing crisis to the gas issue. And it’s all because of federal government policies and regulations. The Liberal Government under Prime Minister Justin Trudeau’s leadership has not been good for the Canadian economy. Shockwaves have been felt throughout the whole economy as a result of the Covid crisis’ egregious mishandling. Canada’s public debt is at record highs and is currently at its third-highest level since World War II.

But, the ignorant Prime Minister is not even willing to resolve any of it. At times, when so many things are falling apart in Canada, liberal poster boy Justin Trudeau is nowhere to be seen. He’s absconding from facing the grave crisis that Canada is reeling under. Because the federal authorities are busy providing the refugees with more permanent housing solutions.