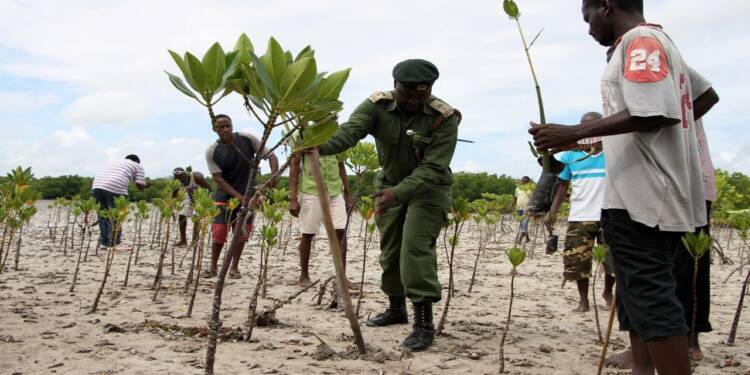 By 2055, the African population is expected to double from its current level to 2.7 billion. The continent is also projected to see the fastest rate of urban growth anywhere in the world: by 2050 Africa’s cities will be home to an additional 950 million people. This is expected to take place at a time when African societies will need to transform their economies to address the unprecedented impacts of climate change and land degradation.

If available resources are used more effectively, these difficulties present a number of significant and game-changing opportunities. Kenya is demonstrating a growth strategy that is ecologically friendly and has been extremely successful for the east African nation. If additional countries take up the slack, the African continent could soon play a big role in the global fight against climate change.

People all over the globe are experiencing firsthand the carnage that climate change could potentially wreak on the planet. Wildfires, droughts, and other disasters are being exacerbated by constantly rising average temperatures, and it is now impossible to overlook them. Fortunately, all is not lost. Countries from all over the world today acknowledge the mounting threat that is, climate change and are collaborating to mitigate its repercussions.

The world is also beginning to recognise just how crucial forests are in the worldwide fight against climate change.  The world’s forests stored roughly twice as much carbon dioxide as they released between 2001 and 2019, according to a recent study that was published in Nature Climate Change. In other words, forests act as a “carbon sink,” absorbing a net 7.6 billion metric tonnes of carbon dioxide annually, 1.5 times more carbon than the US emits.

Carbon markets have been established globally as part of global climate change mitigation plans, allowing high emitting nations or markets to trade GHG emission rights with low-emitting nations or markets. Emissions trading, a market-based strategy to lower the atmospheric concentration of greenhouse gases (GHG), includes carbon markets and carbon credits. It functions by offering financial rewards for lowering the emissions of the selected pollutants. Investors and businesses can exchange carbon credits and offsets at the same time in a carbon market.

The curious case of Kenya:

Due to its wealth of renewable resources and the need for considerable capital investments for effective development, Africa stands to gain significantly from a carbon market. The continent still significantly relies on its oil and gas reserves. The continuous exploitation of these resources will be made feasible by a carbon market by funneling money collected via it toward the renewable energy industry. As a result, while leveraging the advantages associated with oil and gas, the continent will indeed be able to propel the expansion of renewable energy.

More than any other country, Kenya, an East African nation with a shoreline on the Indian Ocean, has comprehended the expanding prospects of a carbon market. Kenya has surpassed the 2022 minimum target of 10 per cent tree cover to achieve 12.13 per cent. It has also achieved an 8.83 per cent forest cover. In 2013, the forest cover was at 6.99 per cent while in 2018 it was 5.99 percent.

Apart from the government’s and civil society’s enthusiastic and persistent endeavors to prepare the nation to confront climate change, there is another significant causal determinant fueling the growth of forests in Kenya, namely the emergence of carbon markets. For instance, largely owing to almost a decade of coordinated efforts to offset carbon dioxide released by distant governments and companies seeking to improve their climate credentials, thousands of trees have been planted in Kenya’s Gazi Bay, undoubtedly the continent’s most famous mangrove restoration project. This was one of Africa’s earliest forays into the carbon market.

Such monetary inducements have provided the Kenyan government a newfound vigor in its fight against climate change. The Kenya Vision 2030 blueprint set a goal for the country to increase the area under forest to 10 percent by 2030 and sustainably manage natural forests for environmental protection and enhanced economic growth.

Huge opportunities for other African nations:

Since Kenya’s success in leveraging the carbon market to its advantage, dozens of parallel initiatives have started appearing all over the continent as African governments strive to profit from this burgeoning global sector. The continent is home to huge swaths of carbon-absorbing lands, with forest covering roughly 674 million hectares, or 22.7%, of Africa, according to the U.N. Food and Agriculture Organization. The Cuvette-Centrale Peatlands deep in the Congo Basin are alone capable of locking in up to 30 billion tons of carbon, or three years’ worth of the world’s emissions.

In areas like Gazi, mangrove forests along the water have expanded. These woods are better at removing carbon from the atmosphere than their equivalents on land. Large international carbon credit companies like Blue Forest and the World Resources Institute sponsor community-led volunteer programmes in Kenya, Mozambique, and Ivory Coast to restore thousands of hectares of forest.

Gabon has thus laid the groundwork for a productive industrial ecosystem for non-timber uses of timber. It’s obvious why the Financial Times praised the system in 2020 as the best “special economic zone” for forest goods in all of Africa. Furthermore, in 2021, Gabon became the first African country to receive payments from the Central African Forest Initiative for reducing carbon emissions through forest protection, a total of $17 million so far.

Additionally, the Miombo woodlands are the third-largest forest type on Earth, and the Miombo biome is the most important habitat for ecosystem services in Africa. Compared to other habitat types, the miombo woodlands also directly benefit more rural communities in Africa than any other habitat type. The estimated total area of these dry forests and woodlands, which stretch from Zambia through Angola in the west to Tanzania in the east and down to the northern tip of South Africa, is about 2.7 million square kilometres (1 million square miles). By replicating a growth model, analogous to Kenya, these countries can attract millions of dollars of investments, thereby enhancing their own economies.

Also Read: Nigeria must control Gulf of Guinea with an ‘Iron Fist’

Despite the significant advantages of a carbon market in Africa, there is still much to be done before the idea can be successfully developed and put into practice. An African carbon market might not only assure cleaner energy processes but also assist in promoting the development of a sustainable renewable energy industry as stakeholders move toward a future powered by renewable energy and nations make substantial progress in reducing emissions.