Ever since the initiation of the war, Europe has struggled due to decreased energy imports from Russia. Now, most European nations are under the grip of record inflation 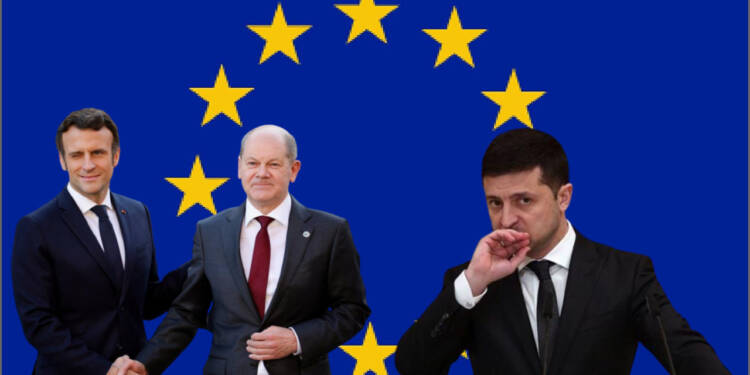 German Chancellor Olaf Scholz urged Russian President Vladimir Putin on a phone call, ‘to find a diplomatic solution to the conflict in Ukraine. It could be based on a ceasefire and the complete withdrawal of Russian troops as soon as possible,’ as stated by a German government spokesperson.

Spokesperson Steffen Hebestreit added, ‘In the 90-minute call, Scholz emphasized the need to ensure the safety of the Zaporizhia nuclear power plant in Ukraine and appealed to Putin to continue to fully implement the United Nations-backed grain agreement.’

Ironically, Germany suspended the possibility of gas imports via the newly built Nord Stream 2 pipeline. Ex-German chancellor, Gerhard Schröder met with Putin previously and urged Germans to normalize relations with Moscow. However, he was heavily criticized for apparently siding with the “Devil”. It looks like Scholz has also sided with the so-called “Devil” and abandoned US.

Europe leaving the US

Interestingly, the Germans are not the only state to rebel against Pentagon and side with Putin. French President Macron has long been advocating for his European counterparts to undo the damage done with Moscow. Also, Macron previously defended his policy of keeping up a dialogue with Russia after it launched its special operation in Ukraine. He argued that world powers should already be preparing for a “negotiated peace” to end the conflict that has already lasted over half a year.

The Germans and French are the two biggest economies of the EU and their recent show of solidarity with Moscow and against Pentagon is a good enough reason to assume that Europe has finally given up arms.

The ongoing war has created such circumstances that have threatened the unity of the EU. Multiple nations like Hungary and Poland have undertaken actions in direct opposition to EU leadership.

And if these actions were not enough, Ursula von der Leyen, a German diplomat and now the President of the European Commission, is all set to deliver a speech to the European Parliament. The speech surely would once again condemn Russia’s special operation in Ukraine but would reportedly be all talk only. The address probably won’t pledge more weapons to Ukraine or impose sanctions on Russia or any cap on the price of Russian gas.


One might wonder why the Europeans are suddenly warming up with Putin. Well, ever since the initiation of the war, Europe has struggled due to decreased energy imports from Russia. They hustled hard to find other sources, however, they eventually failed.

Now, most European nations are under the grip of record inflation. The UK is on the brink of entering a recession, Germany is headed towards de-industrialization and Italy is struggling financially.

Moreover, a civil war-like situation is arising in all the European nations owing to extraordinary rates of food and energy. As a result, amid the oncoming winter, the leaders are realizing that they should cosy up to Putin and negotiate the return of gas supply if they want to stay in power and maintain peace locally.

With Ursula’s speech, the last pillar of Europe’s resistance would fall and so will the ambitions of US president Joe Biden.