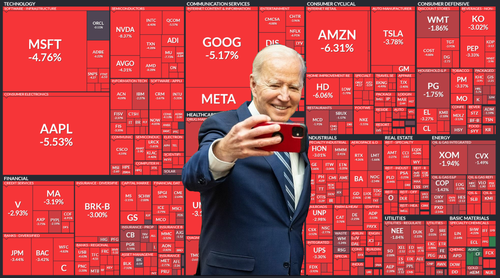 It gets increasingly difficult for one to assume how uninformed the President of the United States is on the matters of the economy and finances of his own nation. Is he surrounded by ignorant and unqualified individuals or he refuses to believe the advice he is given?

Biden brought about his ambitious Inflation Reduction act recently to control the record-high inflation in 4 decades. He later went on to make claims that the US economy had ‘zero inflation’ in the month of July. This was a sabotaged attempt to announce a zero % rise from previous levels and not net zero rate overall.

US stocks on Tuesday registered their steepest one-day decline since June 2020. The sudden drop in prices was brought on by the release of US inflation data on Tuesday, which revealed that, in contrast to expectations for a 0.1% drop, the Consumer Price Index increased by 0.1% month-over-month in August.

And well the fateful day is marked by a celebration thrown by its very own orchestrator. President Joe Biden was busy partying on the White House lawns on the day the Consumer Price Index report was released and the US stock market took a bad enough hit.

Well, it is getting quite hard to understand what he is actually celebrating. The incumbent President seems to be very happy to have orchestrated a Covid-era-like fall in the nation’s stock markets. He seems to be celebrating the evaporation of billions of dollars of funds from the nation’s market.

Investor wealth wiped off as Biden plans to increase rates

It looks like Joe Biden is living in cuckoo land. His administration is refusing to admit that inflation is not the product of only strong demand from the consumer. The black clouds looming over the American economy are in actuality supply driven.

Hindered supply routes of many products from a plethora of vital sectors have pushed up prices exponentially. A majority of these disruptions are due to the conflict in Ukraine. Apart from the effect of sanctions, reduced energy supplies have now made it difficult for many exporting nations to facilitate trade.

However, the Biden administration, although having enough money to fund the war in Ukraine, seems to be reluctant to invest in the development of infrastructure to solidify trade and decrease inflation the natural way.

Read More: Biden vows to eliminate 11 million jobs in the next two years

On the other hand, inflation numbers suggest that the US central bank, the Federal Reserve, may hike interest rates for a record fifth time this year, next week.

The fear of rising rates is the reason that many investors pulled out money as the trust in US-backed stocks deteriorated.

US Senate minority leader Mitch McConnell said Biden and Democrats were “out of touch” on inflation.

“You can’t make it up: Hours after this terrible inflation report, the White House is hosting an ‘inflation reduction’ celebration. Democrats have pushed our economy into disaster and now they’re partying while families pay. They could not look more out of touch if they tried.” tweeted the Republican leader.

It’s quite obvious that the American populace would take notice of Biden’s ignorant attitude and teach him a lesson in the approaching midterms.