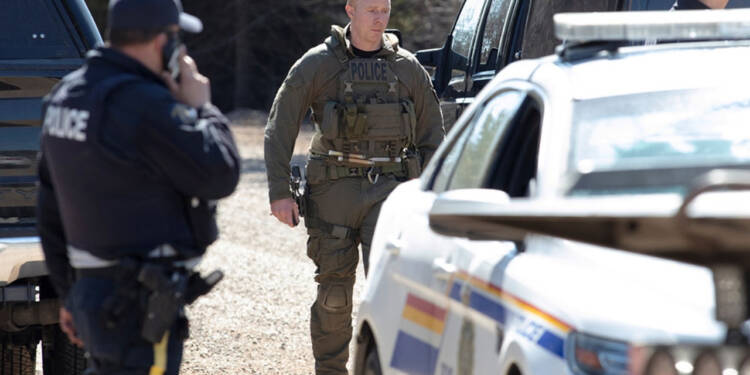 Nova Scotia shooting: A call recording that was purposely deleted and wiped. It is nowhere to be retrieved now. Why? Has it been eaten by a dog? If not, then it must be on file somewhere. It must be having a backup. But, it seems that the ones responsible are going to all lengths to keep their cats in the bag.

In a shocking revelation, one of Canada’s top mounties has let out the secret of the RCMP that it kept brushing under the carpets till now. He said there was a recording of a conference call with the RCMP commissioner that sparked concerns of political interference — but it has since been deleted.

Now, what raises eyebrows is why was the audio deleted. Who did that and was it done on purpose? Certainly, it was done on purpose by those who just wanted to deflect poor Canadians from the real scandal behind them.

The Mass Casualty Commission, which is overseeing the open investigation into the mass shootings that transpired in Nova Scotia in 2020, heard the testimony of Deputy Commissioner Brian Brennan, concerning the recording on Friday.

Brennan confirms that at least a portion of the phone call was recorded by the RCMP’s Dan Brien, director of media relations. Brennan participated in the call on April 28, 2020, along with Commissioner Brenda Lucki, senior RCMP members, and civilian employees.

“It doesn’t exist because Mr Brien has deleted it from whatever phone he was using,” Brennan said.

Now, there have been a lot of agreements regarding the April 28 phone call. Four Nova Scotia RCMP team members have told the commission that Lucki was angry that details about the gunman’s firearms were not released at a news conference earlier that day.

Chief Supt. Darren Campbell’s notes from that day said Lucki had “promised the minister of public safety and the Prime Minister’s Office” the RCMP would release the details ahead of the Liberal government’s pending gun legislation.

But Brennan has told the commission he didn’t remember legislation being mentioned during the call.

Not to mention, Prime Minister Justin Trudeau has said the government did not put any “undue” pressure on the RCMP. But hey, Trudeau, we can smell some political interference here.

RCMP spokesperson Robin Percival confirmed in an email to CBC News on Tuesday that a recording was made of “some part” of the April 28 phone call. She said RCMP senior management was “recently made aware of the recording” and the commission was “promptly” informed of the situation.

“The RCMP has been informed that the recording is no longer available,” Percival said.

You see, the 2020 shootings in Nova Scotia that killed 22 people and injured 3 are also one of the RCMP’s failures. The case has a lot of layers that need to be peeled off to get to the truth. And the families of the victims deserve to know the truth behind those heart-wrenching casualties. But, the corrupt Trudeau government and their pet police force have brushed the matter in the cahoots. Because they don’t want to let you know about another big scandal.

The RCMP did not reveal what guns were used in the whole episode. Speculation is that they were RCMP weapons. This proves why the RCMP is in a bid to destroy all the official records. The RCMP knew that the killer was masked like them. What a crime!

If a recording of the entirety of the April 28 call does exist, Brennan said it would “bring absolute clarity” to all the questions that are being asked by the commission and House of Commons committee.

“There would be no doubt, no room for interpretation if it’s there in its entirety,” Brennan said.

But, why will the RCMP or Trudeau’s government not delete it when it would most benefit from it disappearing? Anyway, we know how incompetent the RCMP fails every time. Even in the recent Saskatchewan mass stabbings that killed at least 10 and injured more than a dozen, the RCMP, instead of investigating the matter and catching the suspects, was busy saving its face.

Mr. Trudeau, Canada has had a lot of you and your corrupt police force now. The country needs to see a change for the better!