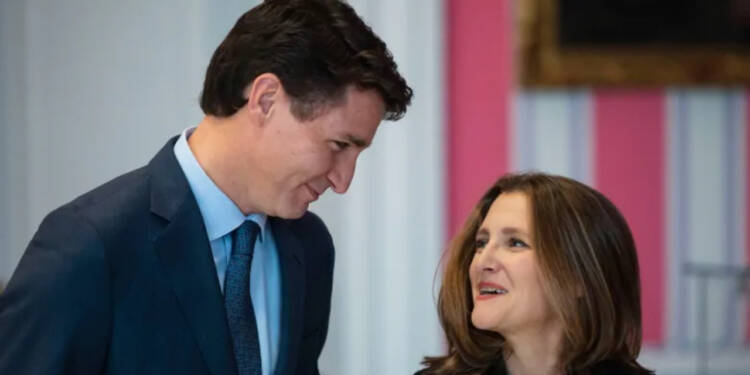 The Canadian prime minister has occasionally been charged for using federal law enforcement organisations like the RCMP to target conservative strongholds and advance liberal causes. But in Alberta, where the conservatives are well-established, they vehemently oppose giving Trudeau power; as a result, they have always hoped to get away with his dictatorial regime. Alberta plans to create a “provincial police service” to take control of its law and order so as to ensure that it is free of any such influence of Trudeau through the RCMP.

Oh, snap! But Trudeau found it difficult to accept that he may lose control of Alberta, so he came up with “Plan B” to ensure that the RCMP could be reinstated in that province. And the partner in crime of Trudeau here is Canada’s Deputy Prime Minister, Chrystia Freeland.

Trudeau and Freeland basically plotted a fake episode just to make sure that they were able to revive RCMP again in Alberta and quash away the “provincial police service”.

Nevertheless, Alberta is Canada’s crown jewel when it comes to oil. And the province is the headquarters of the right-wing political movement in the country. As a result, Trudeau is aching to smash the harmonious picture of Alberta with every chance.

Recently, a major event has happened in Alberta that has become an apple of discord for Liberals. The exact same views expressed by liberals are being echoed by the international media. According to liberal media in the country, Canada’s Deputy Prime Minister, Chrystia Freeland, was verbally harassed during her visit to Grande Prairie, Alberta.

Read more: Alberta kicks Trudeau’s RCMP out of the park

Freeland—partner in crime of Trudeau

After the incident, she said that it was an ‘unpleasant event’. She further added, “People who are members of a visible minority and women are perhaps particularly vulnerable.”

“I am conscious that there are a lot of journalists and politicians across the country who have a lot less support than I do, who can face challenging situations, and it’s important for all of us to support them.

Following this event, she clearly indicated that under RCMP regulations, MPs can receive officer protection in Canada and abroad as needed.

However, the person who reportedly harassed her was claimed by the liberals to be a supporter of the conservatives in Alberta. But what actually turned out would surprise our readers. The accused was a mere TikTok and on his tiktok account, he has been a staunch supporter of the Liberal party in Canada.

Consequently, the following crucial things need to be noted: One, Freeland should have left Alberta at the exact same time if she felt unsafe there. And second, despite Alberta’s government’s legal power to oversee law and order to the extent necessary, Freeland talks about reinstating the RCMP here. Thirdly, it raises suspicions about this occurrence as the case has been turned up to the RCMP, which is entirely under Trudeau’s jurisdiction.

Along with this, she reiterated repeatedly that Albertans are not safe and that the RCMP must be reinstated immediately. This demonstrates unequivocally that the Freeland incident was created solely to defame Conservatives in Alberta and to advance the Liberals’ desire to seize power in Alberta. And certainly to appeal to Albertans’ sympathies in order to build a voter base.

Thus it appears that all this drama was part of Trudeau’s evil strategy to seize control of Alberta by using Freeland as bait. Albertan conservatives have become Trudeau’s most vocal detractors in recent years. Justin is well aware that he might have to resign from his position permanently if Alberta is not won in the future years due to a rising anti-incumbency trend and therefore these games are at play by Trudeau