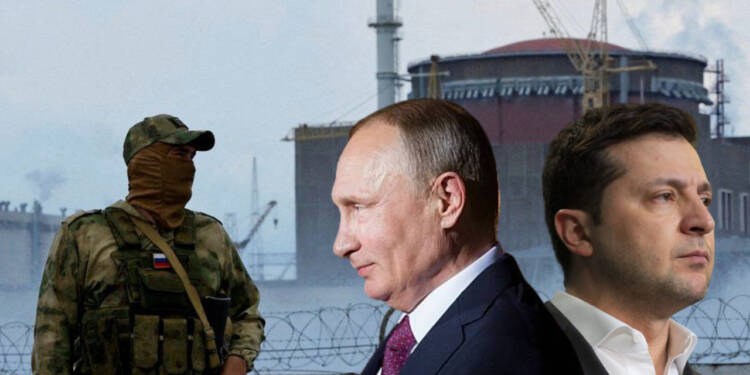 The last two months went in the shadow of fears and death in Ukraine. Moscow and Kyiv were up in arms over the bombing of the Zaporizhzhia nuclear Power Plant, for which the West was constantly accusing Russia.

As Ukraine and NATO continued to despise Russia for its “so-called” war crime, Moscow simply requested an investigation into the bombing. this action gave Ukraine cold sweats. To prevent the truth from being revealed, Mr. President tried every trick in the book.

But, Zelensky’s constant attempt couldn’t sweep the truth under the rug for long. And now, the truth of Zaporizhzhia is finally OUT…

An official IAEA report is not out yet. But, it looks like the US has already conceded its defeat. According to Global Research, the U.S. has finally admitted that Ukraine bombed Zaporizhzhia’s Nuclear Power Plant.

Reportedly, officials who spoke on the condition of anonymity acknowledged that Ukraine’s government, not Russia’s, was responsible for the explosives used to attack the nuclear power plant in Zaporizhzhia.

These officials also made it clear that Ukraine’s attacks against the plant were a key component of its strategy for winning its U.S.-backed and advised war against Russia.

This information was revealed through a report in the New York Times. 85% of the said information was mentioned at the very end of the report. In the said report titled “The Critical Moment Behind Ukraine’s Rapid Advance”, the American official stressed: “Eventually, Ukrainian officials believe their long-term success requires progress on the original goals in the discarded strategy, including recapturing the nuclear power plant in Zaporizhzhia, cutting off Russian forces in Mariupol and pushing Russian forces in Kherson back across the Dnipro River,”

Make no mistake, this was nothing revealing. If one looks closely, the whole episode was clearly a well-scripted drama by the Western allies and Ukraine to drag Russia out of Zaporizhzhia nuclear plant. Russia had peaceful control of the nuclear plant for five months. However, on August 5th, shelling on the nuclear plant damaged three radiation sensors and disrupted the plant’s regular operations by wounding a worker.

Ukraine didn’t even spare a minute to chastise Russia for the bombing. Ukrainian President Volodymyr Zelensky, in his nationwide address, instigated fears in the world that Russia is waging “nuclear terror” by attacking the nuclear plant.

His comments were immediately echoed by Western allies. United States, Germany, France, and the UK pressed for a rapid solution to the tensions surrounding Ukraine’s Zaporizhzhya nuclear power plant. Furthermore, they asked Russia to leave the plant.

However, Russia didn’t back off. Russian authorities charged that Ukrainian forces attacked the location with numerous rocket launchers, damaging administrative buildings, and an area adjacent to a storage facility.

In the midst, Moscow patiently awaited the appropriate moment to strike while the iron is hot. Moscow intelligently requested an UN-backed investigation into the nuclear project. And, Ukraine was caught off guard!

Zelensky attempt to hide the truth

Ukraine tried to ‘abduct’ IAEA officials from the nuclear plant. Then, the Ukrainian checkpoint purposely caused a delay in the investigation, which was headed by IAEA director Rafael Grossi.

However, Russia took steps to ensure that the officials investigate the facility without worrying about their security. According to a report from Caliber.az, United Nations (UN) even thanked Russia for protecting the lives of IAEA investigators.


Read More: Zelensky has damaged his own nuclear power plant and exposed the world to a Chernobyl-like threat

Evidently, Volodymyr Zelenskyy wanted “Chernobyl 2.0”.  In his thirst for power, he was on his way toward turning the world into a nuclear chamber. Though he was close, he got no cigar.