The one party which especially does not find Poilievre's popularity appealing is the Jagmeet Singh-led-NDP party. Ironically, the NDP is not even an opposition party 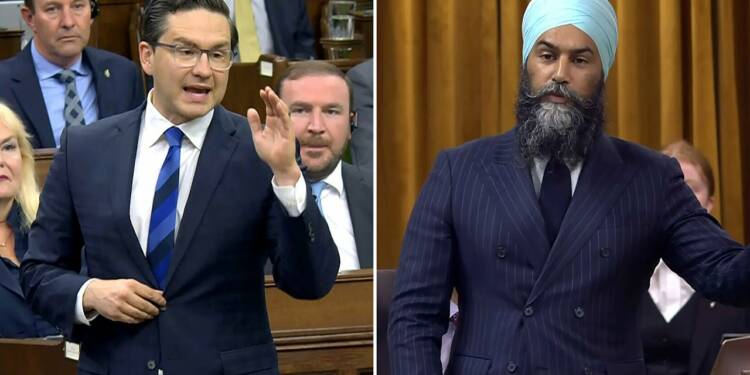 In a recent statement, Jagmeet Singh has ruled out working with ‘Pierre Poilievre and his Conservative party’, claiming Poilievre is “opposed to making life better for people.”

Singh asserted that his interests were completely at odds with those of the head of the Conservative Party shortly after lawmakers returned to the House of Commons this week.

“I don’t see a way to work together with someone who is so fundamentally opposed to making life better for people,” Singh responded to questions from reporters on Tuesday.

“It’s clear that his priorities are very different. He has sided with wealthy CEOs (and against) the idea of making them pay their fair share or pay what they owe. We believe that CEOs should pay what they owe. He’s voted against minimum salary to make sure workers get respect and dignity. I think workers should get good salaries.”

From attacking the conservative leader through ads to stopping the party from garnering votes from the union workers, these actions of Singh are nothing but a show of anxiety. It seems that even the NDP has acknowledged the Conservatives as a real threat. Though, the main threat to the NDP might be unionised workers. These blue-collars, often, see more in what the Conservatives have to offer than what the NDP puts forward.

Read More: The reverse countdown for Trudeau’s ouster has begun

But, what is the stature of Jagmeet Singh in the political fabric of Canada?

The NDP party is not an opposition party. It has prominence only in the western province of British Columbia. They are just the liberal minions sitting on the wrong side of the house on whom the Prime Minister of the country banks.

You see, when the Liberals went from a majority to a minority, Justin Trudeau banked upon his ally Jagmeet Singh to win the polls. Justin Trudeau and Jagmeet Singh came to an agreement that would allow the Liberals to govern with NDP support until 2025. In March, Singh and Prime Minister Justin Trudeau formed a coalition. For that, the NDP demanded that the ruling Liberals deliver on policy promises like universal dental and pharma care in exchange for parliamentary support.

Clearly, Jagmeet has a stronghold in the Liberal Party but if we talk in Canada, he is a mere Trudeau stooge with support of not more than 17% . He is dominantly popular among the Sikh population of the country, that makes up just  1.4% of the Canadian population.

Even if he steps down, he will not be missed.

So, why is he obstructing Poilievre’s way to power?

Actually, Jagmeet Singh is worried. That’s so because Poilievre’s presence as Conservative leader could hurt the New Democrats Party(NDP) in more ways than one.

We know, Populists are admired for a reason. They discuss issues that individuals encounter daily, rather than promoting a woke agenda. And, that’s the solid reason why people are rallying behind them. People believe them and are fed up with the status quo.

Similar things are happening in Canada, and Pierre has hit the correct notes. On his first day in the House of Commons as leader of the official opposition, Poilievre demanded tax cuts for Canadians and went after the Liberals over inflation terming it as Justinflation.

As Trudeau continues down the wrong path, Pierre has undoubtedly discovered the perfect path. He is set to be added to the list of populist leaders who came to power by deposing an elite and incompetent administration.

Now, this seems to worry the liberal minion Jagmeet Singh, more than Prime Minister Justin Trudeau himself. Jagmeet Singh currently enjoys the status of ‘Kingmaker’ in the Canadian politics. It’s so because Justin Trudeau lacks majority in the House of Commons, and the liberals require Jagmeet Singh’s auspices to stay in power. Thanks to his kingmaker status, Singh is the actual King of Ottawa. Trudeau does what Singh says. Now, think of a situation where the conservative party has a clear majority in the Parliament. Singh will lose the Kingmaker status, along with much-cherished leverage against the Canadian government. Simply put, Pierre’s victory in the elections would render Jagmeet Singh a politically bankrupt leader and would result in a terrible ending to his political career.