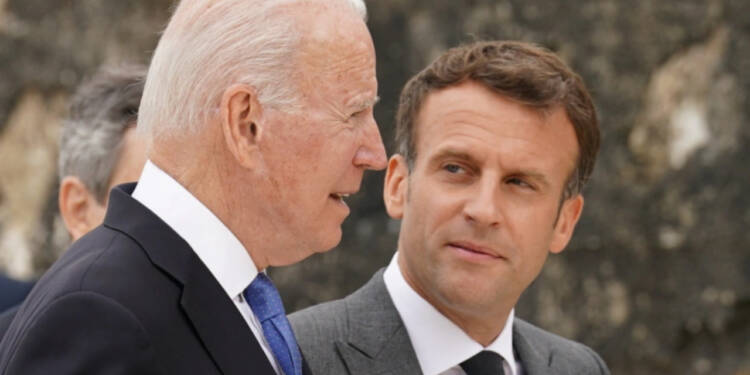 After his historic failure to persuade Germany, it looks like the United States has decided to come to blows with France. According to Politico, the White House announced Monday that US President Joe Biden is about to host a state dinner for French President Emmanuel Macron.

According to media reports, the dinner is scheduled for 1st December and will be the first state visit hosted by Biden after almost two years in office. This is for the time when Biden is poised to meet Macron in the White House.

However, one must note the timing of this announcement. As the Ukraine war rages on, France has once again overturned an appeal of the United States which had hoped Ukraine could benefit from French-made Leclerc tanks.

According to the New Indian Express, Veterans of the French army have warned that France needs to solidify that it needs to strengthen its own army first, then it could think about others.

The veterans have stressed “I doubt that we can give Leclerc tanks. Though the Americans have thousands of Abrams, we have a maximum of 200 Leclercs.”

France over the past seven months

France and its allies in the European Union decided to stand strongly behind Ukraine and its people on February 24, when the Ukraine War formally began and the Russian military entered Ukrainian territory. The rationale for this was rather obvious; given how the conflict escalated for one week, everyone in the EU believed that the war would last only a few weeks.

However, more than seven months have passed, and the war is now in a complete deadlock. Brussels is still enthusiastic that it could take down Russia, however, France had already made it apparent in two months that fighting someone else’s war is idiotic.

At the start of the Ukraine war, the French president made spiteful statements condemning the Russian invasion of Ukraine.

But, when the tide started turning towards Moscow France became opposed to European nations as he objected to giving unconditional weaponry for the war in Ukraine. Then, Macron became a major hurdle in Ukraine’s pathway to obtaining EU membership.

Furthermore, Macron even warned Ukraine to avoid humiliating Putin. The nation has sent less military aid than even Germany and trained an extraordinarily small number of Ukrainian troops compared to others like the United Kingdom. Macron had even proposed peace talks between Ukraine and Russia via Iran.

So, at this point in time, it’s safe to conclude that France had already made a clarion that it is out of the Ukraine war. However, Macron’s jump into the Ukraine war made him cost his political carrier. In the recent presidential polls, Macron lost a huge chunk of voter base ahead to opponent Marine Le-pen.

Although, Macron got 58% of voter approval in the elections. Yet, the leader lost the majority in Parliamentarian elections. The conservative leader Marine Le-pen captured 80 seats of Macron’s earlier stronghold.

Believe it or not, but, more than Olaf’s u-turn on Ukraine, it must have been Macron whose sudden shift had tensed the United States.

Macron is undoubtedly an important ally when it comes to Europe. Whatever he states or indicates to European allies is blindly followed. When Macron was solely irking against Ukraine while towing a neutral approach, Biden remained silent.

But now, tables have turned. Seeing Macron, Poland, Eastern Ukrainian nations, and eventually, even Germany started to side themselves from Ukraine.

The United States is somewhat aware of the fact that if Europe withdraws from the war in Ukraine, Ukraine would lose strength and the so-called war against Russia will finally come to a rapid end.

The old man i.e. Joe Biden became enraged and began pressuring countries like Germany and France, who are now being accused of sponsoring terrorism by the FATF. He did everything in his power to disavow the countries that were hesitant to give Ukraine extra aid.

Eventually, Germany gave in to US pressure, but France resisted. French President Emmanuel Macron forewarned the United States of a global crisis of Western “liberal democracies.”

As per him, liberalism is dying a slow death because of rising conservatism and the liberal ideologues are to be blamed for it.

Biden has now decided to speak with Emmanuel Macron directly after seeing that no cruel tricks on France, unlike those on Germany, have worked. However, even this strategy of the US is doomed to failure because France has already made up its mind. This might be the reason why uncle Joe is cold-sweated.