Even in countries like Niger, which became the latest base for Western troops seeking to maintain their influence in the Sahel region after French withdrawal from Mali, protests have begun emerging against what the Nigeriens perceive as “colonial powers”. 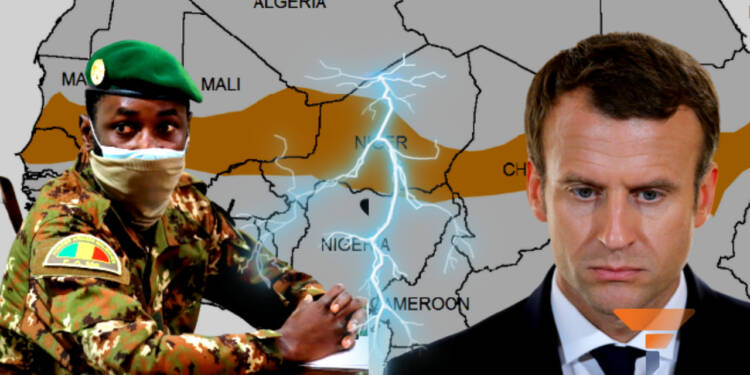 Located in the immediate South of the Saharan Desert and lying North to Tropical Africa, the Sahel region stretches from the continent’s Eastern coastline to the West. The region has been historically marked with socio-economic and socio-political conflicts.

While frequent famines, weak state institutions, political and security instability, and a harsh, taxing climate have shaped the Sahel region almost perfectly for social strife and unrest, the empirical reason behind the precarious condition of the region is the rising threat of radical Islamism that dominates the region.

Even now, the 10-country region, which has historically been dominated by European countries, holds a key position as the scene of fierce rivalry for natural resources. Although French colonialism was abolished in the region in the 1950s, the jubilation was ephemeral because France continued to maintain most of its bases and influence over the neighboring nations.

Furthermore, in 2013, as part of the Operation Serval, France sent 5,000 troops to Mali at the government’s behest as it was facing an armed rebellion. The operation ended on 15 July 2014, and was replaced by Operation Barkhane, which was launched on 1 August 2014 to fight Islamist fighters in the Sahel.

France, Germany, and Sahel countries also launched the Sahel Alliance in 2017 with the aim of bringing together major international donors to better coordinate development assistance and other financing efforts for the region.

A few months ago, France—alongside several EU states and Canada—announced the termination of its decade-long military involvement in Mali. While the French President Emmanuel Macron refused to admit failure, the Malian government and citizenry believe otherwise.

Recently, Mali’s interim prime minister Abdoulaye Idrissa Maïga strongly denounced France at the UN, saying they were “stabbed in the back” when the French military withdrew from the country.

Maïga said, “The world will remember that, after being abandoned in mid-air on 10 June 2021 by France’s unilateral decision to withdraw the Barkhane force from Mali, my country was then stabbed in the back by the French authorities”.

In view of the gravity of the acts committed by the French military, Mali, in its letter dated 15 August 2022, requested an emergency meeting of the United Nations Security Council.

Maiga added, “The purpose of this meeting is to allow Mali to present the evidence in its possession, demonstrating that the French army has repeatedly attacked my country”.

You see, the attitude toward France in Mali and the Sahel changed dramatically between 2013 and 2021. Paris, who was at first lauded as a savior, is now accused of mismanaging the security situation and even encouraging neo-colonial dependency patterns.

France also lost the Malian public’s confidence owing to a lack of accountability over civilian losses during military operations. According to certain UN investigators, a French airstrike in January 2021, apparently on a militant position, hit a wedding ceremony in central Mali and killed 19 civilians, contradicting the official French account of events.

Additionally, despite France’s sustained military intervention since 2013, the violence has moved beyond Mali to Niger and Burkina Faso. Meanwhile, regional forces appear to be no better prepared to combat the menace of terrorism. Indeed, violence in the three countries has escalated year after year since 2017, with over 2,500 events and approximately 6,000 deaths expected in 2021.

Read More: The story of Sahel: How the US and EU came to a disturbed region and turned it into a never-ending strife

Furthermore, the Malian government and people have constantly complained about France’s affiliation with “terrorists”. The French revived an older cooperation with the National Movement for the Liberation of Azawad (MNLA), a Tuareg secessionist group that was the main originator of the 2012 insurrection which culminated in jihadist-controlled much of northern Mali within months. Malian authorities consider the secessionist MNLA and its subsequent offshoots to be “terrorist” organisations. For many Malians, the French participation with the MNLA and support for the Malian state were irreconcilable. Since then, this issue has contributed to the deterioration of Franco-Malian ties, with many pundits referring to it as France’s “original sin.”

The rise of Moscow:

When the French withdrew their troops from Mali, Russia began to step in and take the place of the European nation. With little time to spare, the Russian-affiliated Wagner group entered the scene and pledged to assist Mali in its fight against Islamic terrorism, a persistent problem for the nation. Additionally, the Wagner Group has already been closely collaborating with the Central African Republic (CAR), another former French colony.

These success tales would irrefutably increase support for the Russians among the Sahel countries. Even in countries like Niger, which became the latest base for Western troops seeking to maintain their influence in the Sahel region after French withdrawal from Mali, protests have begun emerging against what the Nigeriens perceive as “colonial powers”. And this increased cynicism and antagonism toward the West has been coincided, as anticipated, with an increasing faith in Russia.