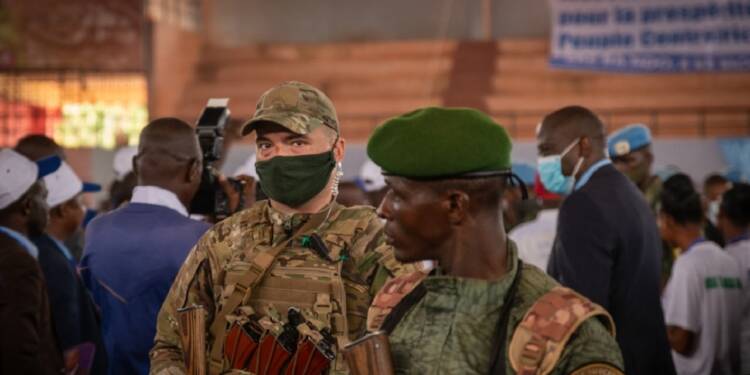 “I myself cleaned the old weapons, figured out the bulletproof vests myself and found specialists who could help me with this. From that moment, on May 1, 2014, a group of patriots was born, which later acquired the name BTG “Wagner”.” This is an alleged statement of Yevgeniy Prigozhyn the founder of the infamous PMC Wagner Group also known as BTG Wagner or simply the Wagner Group. In this article today we are going to decode how Wagner Group turned an EU dominated Africa into a Russian stronghold.

After being in denial for almost a decade Yevgeniy Prigozhin has finally accepted that he himself founded the PMC Wagner Group. While it’s not clear that Wagner has direct links to Putin, Prigozhin has access to the inner circle of Putin.

Prigozhin was sentenced to 9 years of prison for different offences. After he got out of jail he started a business of selling hot dogs but an aspirational Prigozhin had big dreams. With Russia transitioning to a capitalistic economy in the 1990s, Prigozhin also expanded his business. He sniffed an opportunity in Russia’s growing economy and set up St. Petersburg’s first grocery chain and then went on to establish a business of luxury restaurants. This is where Vladimir Putin comes into the picture, as he started dining in Prigozhin’s ‘New Island’, a luxury floating restaurant in Putin’s hometown of St. Petersburg.

The businessman didn’t waste an iota of second in grabbing the opportunity to grab the attention of Putin. He himself started to prepare dishes for Putin and didn’t hesitate in serving Putin personally, hence abbreviated the name “Putin’s Chef”.

Many researchers around the world recognise the Wagner Group as a private militia of Putin himself.

The Wagner Group was founded during the Russia-Ukraine conflict dating back to 2014 when Russia took control of Crimea.

Since its birth Wagner Group has played different key roles in many conflicts. Russia was also directly involved in some of the conflicts. The list of conflicts includes Syrian War, Crimean Annexation, and Libya war among others. The Wagner Group is a major player in the continent of Africa, predominantly a forte of European Powers especially France. The European dominance of Africa is a well-documented phenomenon but it has decreased since its peak in the times of ‘Scramble for Africa’. When there is a mention of the Wagner Group, no one can leave out the infamous US Blackwaters, Mozart Group or the French Barkhane Group. These all are private militias formed to achieve a specific goal while dodging the international laws. A year or two ago the US was accused of payment of US$1 billion in U.S. government contracts to the private military group Blackwaters. While Africa was dominated by the European Powers from a very long time, the colonial masters failed at curbing the terrorist activities across the continent. Whether it is Sahel region based terrorists or DRC’s M23 rebels. The West has completely failed at limiting the terror activities in the continent.

Having a mercenary force serves the host-country’s purpose three-folds is a boon. The host country gets the combat ready soldiers but doesn’t need to deal with old-veterans and their pensions. But the most important of them is that the host country can maintain plausible deniability of its on-ground involvement while expanding its foreign reach.

For example the US can deploy its Blackwaters Group in Iraq for certain missions but can deny its involvement at world forums.

But these infamous groups are not only in the business of killing and achieving missions which regular soldiers can’t officially execute but also provide security, fight terrorists, and also help in cracking business deals for its host country.

For instance in 2018, Russia outfoxed France in obtaining a CAR Arms Embargo. Reportedly 370 Wagner contractors were present in the Central African Republic. These contractors were present there to provide security to the President Faustin-Archange Touadera. As you have already realized that this service is not free of charge. CAR is rich in diamonds, gold, uranium, and crude among other minerals. And Russian companies had negotiated mining concessions with CAR. These companies are already mining diamonds and the security of these mines is also taken care of by Wagner.

When we move northwards from central Africa we find a war-torn country Libya. The reports of involvement of Wagner in Libya surfaced in November 2014 when Prigozhin was spotted with the Russian military commanders who were in talks with the Libyan National Army.

After some time reports emerged that Wagner mercenaries were training the Libyan Forces in sniper training, drone operating and combat training.

Afterwards Russia signed an oil deal with Libya further increasing its involvement in the country.

Now we take you to the Sahel Region of Africa, predominantly controlled by France. This region is now going into the camp of Russia. When we talk of Mali which has recently left the France-led G5 Sahel, it has kicked out the remaining French troops and its Mercenary Barkhane Group and is operating with Russia and its Wagner group in order to wipe out the islamic terrorists from its territory.

The Scramble for Africa was a period when European powers dominated Africa but the situation today has changed. The Wagner group’s transformation from a covert group to a services providing open group where recruitments are done in prisons, or through banners in Russia has changed the course of on ground situation of the African Continent.