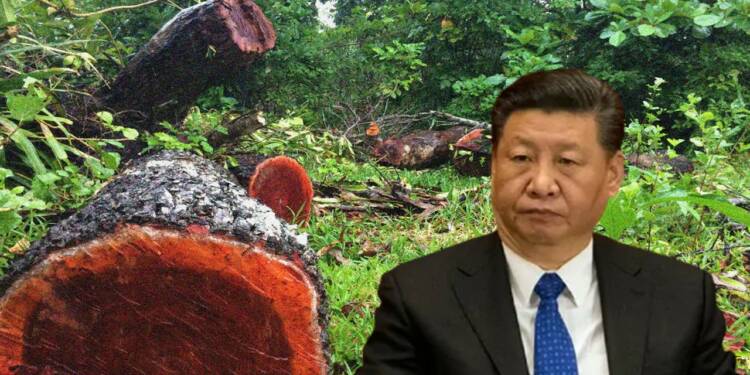 China has been involved in smuggling of rosewood which is an endangered species. A complex illegal international smuggling network running from Madagascar, Tanzania, Malawi and Zambia, running all the way to China has been revealed. Rosewood is being smuggled from these African countries in huge quantities to markets across China. The rosewood from these African states is being used to build decorative Ming dynasty style furniture for elites in China which include higher officials in the Chinese Communist Party. Despite a ban on rosewood harvesting, illegal trade with China is prevalent. The Chinese government sponsored imports of rosewood has created a billion dollar illegal market in the country.

Networks in the respective African governments help in the illegal transport of rosewood from Madagascar, Malawi, Zambia and Tanzania to China. African rosewood is an extremely endangered species of tropical timber which is necessary for ecology and livelihood. Demand for this rare tree species has risen over the years.

As per a report by the Environmental Investigation Agency China has imported 220,000 rosewood trees from May 2020 to March 2022 from Malawi despite a ban on its harvest in the country. The Chinese elites, mostly members of CCP have found in Africa, a rich source of rosewood to satiate their ugly hunger for luxury at the cost of nature. The EIA also uncovered that fifty/forty foot containers of rosewood were shipped from Zambia to China between 2017 and 2019. The report stated that traffickers spent seven million dollars in bribes and other fees.

There are laws such as the East African Community Customs Management Act banning the transport and shipping of illegal rosewood via ports of Mombasa and Dar es Salaam, however, it has not helped in stopping smuggling from countries like Zambia and Madagascar to China.

Read more: DRC has a golden future but that future does not include China

Chinese presence in Africa and its dangers

China’s presence in Africa refuses to die down since it has dug its claws deep into the continent over the years. China’s dominance has risen in Africa which led to the establishment of an extensive illegal network in the continent. For decades, the Chinese government took advantage of the circumstances of African leaders and manipulated them into selling their nation and people. China’s old habit of betraying its “friends” makes it one of the most dangerous players in geopolitical affairs therefore its increased presence should alarm African nations. China’s history of stabbing its partners in the back is still very much alive which has turned into an aggressive bully.

For decades, China’s eyes have been set on Africa’s mineral resources, it has managed to gain control on precious metals as well as oil and gas using cunning tactics. China has always relied on its infamous strategy of misguiding poor nations, leading them on a debt trap and then stealing their resources one by one. This is what China has been doing in Africa for years, its motive is not to help it grow, become self-sufficient and develop the economy but to make it more subservient. When it comes to untrustworthiness, China has plenty of it which can be seen with what it did with other countries.

China used its infamous practice of debt trap in Africa. It gave them huge loans which it knew beforehand that the receiver country would not be able to repay. When these African nations defaulted on their payments, China used their helplessness and took control of not only their mineral resources but also their national assests in exchange for forgiving the debts.

In August, China announced that it will be forgiving the loans of seventeen African countries to counter the debt-trap criticism it has been receiving. China is also Zambia’s biggest creditor, it is helping the biggest defaulter in Africa in restructuring of its external debt. Zambia was practically declared as a Chinese colony. The decision to forgive debt in Africa could be motivated by the attempt to gain control over precious endangered resources such as rosewood.

Unfortunately, several African leaders have sold their countries, resources and people to China. Chinese companies have been operating in several countries for decades, owning mines and industries. The locals in Africa have vehemently opposed the dominance of China in their lands; many have accused these companies of snatching away their livelihood, damaging the ecology, exploiting their labour and stealing mineral resources.

There are reports and investigations which have unearthed that the Chinese companies have been running a wide network of illegal trade and smuggling rings in African states. China, has stooped to such depths, that it is even hell bent upon depriving the African continent of not only its endangered gifts of nature but also its minerals as well.

It is never too late to make amends; African leaders still have time to kick China out and save their countries and people from further destruction and loss. They need to get back the control on Africa’s wealth from CCP elites and start planning a future without China.

Read more: Ethiopia is the latest African country to join in the “throw China out” campaign