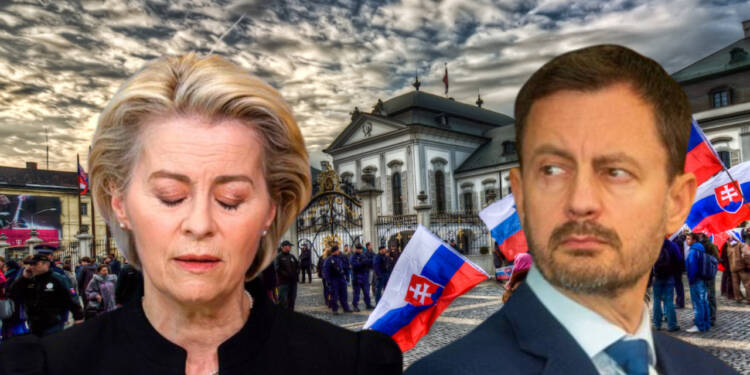 Two weeks ago, a Slovakian survey became a hot potato for the European Union (EU). The representative survey named “How are you Slovakia?” conducted by MNFORCE claimed that more than half of Slovaks would welcome a military victory of Russia over Ukraine.

However, the Slovakian Government has a very different stance from the people as they stand blindly in favor of Ukraine. Slovakia has provided armaments to Ukraine such as howitzers. Slovakia’s president had joined the ranks of those who argued for Ukraine to be given candidate status, etc.

But, hold your horses, it looks like the EU is not at all happy with Slovakians for some reason. And, consequently, some recent developments in Slovakia indicate that to protect Slovakians, Bratislava is ready to lock horns with the EU.

According to Financial Times, Slovakia’s prime minister Eduard Heger has claimed that rising electricity bills had pushed his country’s economy at risk of “total collapse.” Notably, this comment is one of the starkest remarks yet from an EU leader on the implications of the energy crisis that has dawned upon the Union.

Furthermore, demanding help from EU, Eduard Heger said that Slovakia would be compelled to nationalise the nation’s electricity supplies if Brussels did not provide billions of euros in assistance because the sharp rise in energy prices is bound to destroy the Slovakian economy.

For those who don’t know, Slovakia produces a sizable amount of nuclear and hydroelectric energy. As the greatest energy crisis of the century started knocking doors of EU, in a heroic motion, Slovakia’s largest energy supplier decided to sell off its extra electricity to energy traders at the beginning of Ukraine war. Now, when Slovakia is also feeling the brunt of the Ukraine war, the same traders in neighboring nations that purchased Slovakian energy are now asking Bratislava to sign energy deals that are five times higher costlier than market rates.

Eduard stressed, “Slovaks are purchasing the same energy they sold for €100 for €500,” Surprisingly, Eduard has even warned the EU that Slovakia would stop listening to EU diktats if Brussels fails to help them. Reportedly, the PM has said,“European Commission plan for a €140bn windfall tax on power generators in the bloc would not work in Slovakia.”

Read More: Slovakia’s pro-EU government can fall any moment, and it will be replaced by a pro-Russia President

Such comments from a Pro-EU government are a very rare sight to see. However, the Slovakian government is forced to push such statements because it doesn’t want to face the wrath of the Slovakian people. Notably, Slovaks are already irked with their authorities. In response to rising energy prices, thousands of people demonstrated in the capital of Slovakia recently and demanded an early election. Supporters of various parties, including the Conservatives, participated in the rally, which was organized by the opposition Smer-Social Democracy party of former populist Prime Minister Robert Fico.

Furthermore, Slovaks don’t count Brussels as a reliable partner like Russia. A Globsec study found that in 2021, 42% of Slovaks referred to Russia as a key partner and 78% of them thought of Russians as their “Slavic brothers.”

So, without any shadow of a doubt, Slovaks are no big fan of the European Union. But when you see, Eduard Heger and Zuzana Čaputová, they have pure devotion toward the EU.

Over the past few months, Slovak authorities had an idea that their people are undoubtedly against the war. First off, Slovakia raised concerns over Russian oil and gas sanctions, then Slovakia openly declared “Slovakian food is for Slovaks”. However, in the name of solidarity, Bratislava eventually surrendered.

But now, Slovakia is heading to hell in a handbasket. The nation is falling short of resources and even essential commodities. At such a crucial moment, people would undoubtedly go all guns blazing against Slovakian government and EU. Certainly, Eduard and Zuzana are standing in front of a lion’s den.