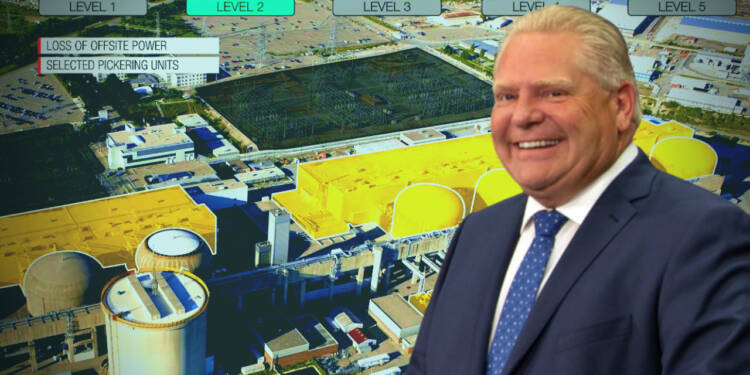 It’s the height of stupidity that Canada is coping with an electricity crisis despite housing one of the biggest fossil fuel reserves on this planet.

And to overcome this artificially-manufactured crisis, fatal methods are being adopted and lives of poor Canadians are being put at risk.

As a result, what we see are seeing happening in Ontario is that millions of residents could soon find themselves tossed into a deadly radiation chamber.

According to CBC News, Ontario is considering continuing operations in Pickering nuclear reactor. A refurbishment process will be undertaken which might keep it operational for an additional 30 years. The government says this is being done to keep up with electricity demands that are increasing so dramatically that they have “surprised” the government.

It may be noted that the ageing nuclear plant was slated to be closed in September 2026. Now, Provincial Energy Minister Todd Smith said that the province is now asking the Canadian Nuclear Safety Commission to postpone the plant closure date. Ontario’s dependency on the nuclear plant is such that it alone generated 16% of the province’s electricity last year.

Ontario’s administration believes that the station still has the capacity to supply electricity to a portion of the province for many years to come.

The provincial government says the rising demand is driven by growth in the EV sector and the electrification of public transportation. By 2035, the estimated gap between needed and available electricity is expected to hit 5,000 megawatts.

Moreover, Premier Doug Ford believes that extending the station operations would reduce 2.1 megatons, or roughly 20% of the electricity sector’s projected carbon emissions, by 2026. So far so good, but the sorry state of the ageing nuclear plant is what raises one’s eyebrows.

According to the findings of the last feasibility study, which was carried out between 2006 and 2009, the facility must be shut down at all costs by 2025. However, Premier Doug is reluctant to do so in the name of solidifying power infrastructure in the province.

Concerns about the operation of the Pickering nuclear facility have occasionally been expressed by experts.

Doug is now eyeing refurbishing the old station. Now, it raises obvious questions. Firstly, would the refurbishment process meet the required standards? And secondly, out of which compulsion is Ontario banking on an ageing, fatal nuclear plant to meet its energy needs when it has easy access to Canada’s vast fossil fuel riches?

Read More:  Awww! Canada will give mild punishment to drug traffickers because they are poor people trying to survive

Make no mistake, the Pickering Nuclear Station is one of the oldest nuclear stations in the world. It is now well over its official retirement age and has a long history of disasters and safety concerns.

For instance, on August 1, 1983, Pickering reactor 2 had a ‘loss-of-coolant’ accident after a pressure tube suffered a meter-long rupture. The station was shut down and the four reactors at section A were eventually retubed at a cost of about $1 billion.

Since then, the plant has required routine maintenance because of a variety of problems, occasional leaks and even unstable reactions.

The most recent instance was in September 2015 when a Pickering reactor abruptly went down due to an unexpected “system trip,” forcing the province to scramble for alternative sources of energy.

If the Pickering Nuclear Station encounters a disaster of the scale of Fukushima or Chernobyl, More than 650,000 people could lose their homes and would require to be evacuated permanently.

Tens of thousands of people could contract cancer or other serious illnesses. More than 15 million kg of dangerous spent fuel is already stored at the station, which is an insane volume of radioactive waste.

Read More: How house rents in Canada went from cheap to average to unaffordable in last 10 years

Pickering nuclear station needs to be closed at the earliest rather than given a refurbishment. Sadly, Doug is hellbent to keep this outdated machinery running. Ontario anyway has tacit approval from Trudeau’s federal government since the plant will only help further his green agenda. Beware dear Ontarians! Premier Doug and PM Trudeau have decided to throw you in a fatal nuclear radiation chamber.