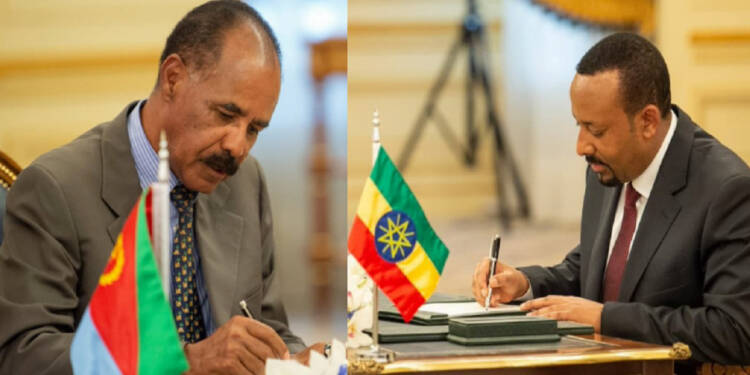 In order to shield itself from European colonists the Ethiopian Empire expanded its territory by engulfing the nearby lands and the result of it was a landmass consisting of different ethnic groups. It would not be wrong to call Ethiopia a melting pot of diverse ethnicities and cultures. One of these ethnicities was Eritrea. After Eritrea got independence from Ethiopia both were  engaged in conflict for a very long time. But with Prime Minister Abiy Ahmed at the helm of affairs in Ethiopia, things are changing now and Ethiopia and Eritrea are allies together fighting the Tigray Menace.

The story of West-backed Tigray rebels turning into a rogue group and even terrorizing Tigray population is very crude. Ethiopia got into a ceasefire agreement with Tigray rebels on humanitarian grounds but the rebels didn’t stop wreaking havoc and the fight started to spill into the neighboring Eritrea. A no-nonsense Eritrea unleashed an unprecedented offensive on the TPLF. Eritrea is now closer than ever to end a menace which has been destabilizing the region for years now. The U.N. which is majorly funded by the West is now at the forefront for victimization of the TPLF terrorists.

West is perturbed by the hounding of its proxy

The West is now rattled by the development that its tool to control the Horn of Africa region is nearing extinction. TPLF is a proxy of the West which it used to keep Ethiopia, Eritrea and their neighborhood in check. It is also well documented that when the aid in the name of healthcare and medicines reached the Tigray region, a dormant TPLF again got activated. We at TFI decoded earlier that the aid of the West will trigger more violence in the region. On one hand the EU was readying a package for health and education in the Tigray region through “NGOs” but the direct assistance to the Abiy Government was put on hold.

It is evident that the aid was strategically utilized for other purposes such as destabilizing the region and throwing out the Abiy Government.

The U.N. crying foul on the issue of war crimes by the TPLF is triggered by the aid to the Tigray Region and can be attributed to the West instead of Africa.

Recently according to some news sources a U.N. Aid truck got damaged from the debris of a drone strike carried out by Ethiopia. It is clearly evident from the developments for years now that the West is using the TPLF group to counterbalance Eritrea and Ethiopia. And U.N. which is majorly funded by the West is providing assistance to the TPLF in the guise of aid to the Tigray region. But the question is why the West or the US is so obsessed with the TPLF?

Strategic and Economic importance of Ethiopia

According to a report by, Chemical Society of Ethiopia, Inter-Trappean coal and oil shale deposits are distributed on the South-Western and Central

According to World Atlas, apart from oil and coal Ethiopia also holds a few known reserves of precious metals and other resources such as gold, potash, natural gas, copper, and platinum among others. The generation of hydropower is also a potential which Ethiopia holds in addition to these natural resources.

Ethiopia is also at a strategic vantage point for which the US is always looking for after natural resources. From Ethiopia any power can control Somalia, Bab El Mandeb, and the other neighboring regions of the Horn of Africa.

Coming to the importance of Eritrea which is a nation that controls the strait of Bab El Mandeb and opens into the strategically important Red Sea. The small nation of Eritrea also holds many natural resources such as oil, gold, copper, zinc, potash and other natural resources.

In the end I would like to reiterate that the West is notorious when it comes to natural resources or strategic locations such as Afghanistan and Iraq. What we saw in Afghanistan was very crude in nature as the US fought its own proxy war for 20 years, which it created to oust Russia from the strategically important Afghanistan. In Iraq it was purely the lust of oil which fueled the operations of the USA in the already dilapidated Middle Eastern country. What we are seeing in the Tigray region is also an exact copy of these two where the USA is destabilizing the region to satisfy its hunger for money and power.