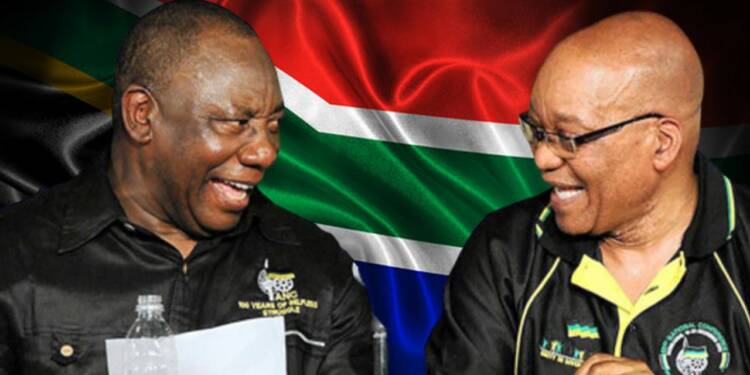 Corruption charges against Cyril Ramaphosa: Corruption is deeply institutionalized in South Africa. Today, if there’s one major stumbling block to South Africa’s progress, it is corruption. Despite having tremendous growth potential the country is stuck in a vicious cycle of corrupt governments and unfortunately it’s the citizens who have to bear the brunt of it.

As South Africa’s next general election approaches, it seems there’s no hope for any change in the circumstances.

The current South African President Cyril Ramaphosa came to power on the promise of weeding out corruption and replaced the corrupt Jacob Zuma as president four years ago.

Cyril Ramaphosa wrested power on the promise of being clean. However, now he himself is facing an explosive corruption scandal. Ramaphosa’s latest corruption scandal is being labelled by South African media as the infamous ‘farmgate case’. Arthur Fraser, a former intelligence director, filed a complaint against Cyril Ramaphosa charging him with corruption, kidnapping, and money laundering.

He is facing the allegation that he tried to cover up the theft of millions of US dollars hidden at his game farm. It is claimed that at least $4m in cash was taken by burglars who broke in and found the money in cushions on sofas at a game farm owned by Ramaphosa.

After years of rising unemployment and sluggish economic growth, Ramaphosa’s election as the President had raised hopes in South Africa and could have been the much needed turning point. However, now the corruption allegations against Ramaphosa have only contributed to widespread disappointment in the country and further strengthened the belief that, corruption is indeed embedded in the South African system.

Now the former South African President Jacob Zuma says that he is ready to make a surprise return to politics if he is nominated by Party members of ANC. The 80-year-old Jacob Zuma was president from 2009 to 2018 before he was forced to resign amid wide-ranging allegations of corruption. He was also sentenced to 15 months in prison for defying a court order to testify at a judicial commission investigating corruption during his tenure, and has since been released on medical parole.

Zuma faces charges of corruption, fraud and money laundering. He is facing trial for corruption involving a major arms deal the South African government was negotiating more than 20 years ago, around the time Zuma was a deputy president of South Africa. However, the corruption trial has been getting postponed in a seemingly endless series of delays.

He is accused of receiving bribes from French arms company Thales through his former financial advisor Schabir Shaik, who was convicted of related charges in 2005.Jacob Zuma has also been accused of systematic and “unlawful” efforts to give business allies control of billions of dollars’ worth of state assets.

After Zuma was jailed for contempt in July last year, it had set off days of rioting in which shops, warehouses and factories were looted and many burned. More than 300 people had died in the unrest, the worst in South Africa since the end of apartheid regime in 1994. Now, Jacob Zuma has said that he is ready for a political comeback with the ruling party. “I will not refuse such a call should they deem it necessary for me to serve the organization again,” he recently said. Zuma became president in 2009 but was forced to step down nine years later in favor of Ramaphosa, the then vice president.

Although Jacob Zuma lost his presidency due to the Corruption charges and Ramaphosa took over on the promise of rooting out corruption, he’s no saviour either. When Ramaphosa became President he tried his best to get rid of Jacob Zuma and his legacy. He tried to finish him off politically. Now, the so called “clean” President Cyril Ramaphosa could face criminal charges himself and is already facing calls to step down over explosive corruption scandal of his own. Now, with Zuma eyeing for a political comeback could decide the future of both the ruling party, ANC and also South Africa.

The current President Cyril Ramaphosa, faces stiff opposition in getting re-elected as party leader and staying on as the country’s president. A beleaguered Zuma is critical of Ramaphosa, and the pair is seen to be part of opposing factions within ANC. Ramaphosa who initially promised to clean the corrupt practices in the country has now been considerably losing grip on his party due to the farmgate scandal. Although no criminal charges have been brought against Ramaphosa, but Parliament could impeach him if he is found to have broken his oath of office.

On the other hand Zuma is still popular among some factions of the ANC and at the grassroot level in some regions. He still yields considerable influence. Current President Cyril Ramaphosa, campaigned within the party to unseat Zuma and clean up the corruption and his victory was the occasion for the longstanding criminal proceedings to go forward against Zuma.

Also Read: Cyril Ramaphosa is a freaking disgrace but, South African politics is a stinking gutter too

The ruling party ANC is deeply divided. As part of Ramaphosa’s ANC cleanup, he had also suspended Ace Magashule, who is a close Zuma ally and is also accused of corruption, from his position as the ANC secretary-general. Zuma, Magashule, and others are now seeking to recapture the ANC and ultimately force out Ramaphosa. With Ramaphosa himself facing corruption charges, it has only become easier for Zuma led faction in ANC.

The bottom line for South African politics is if Zuma indeed returns to politics, chances are he will try to settle his scores against Ramaphosa. It will probably unleash a new era of vendetta politics where both Ramaphosa and Zuma will try to settle their scores against each other in the name of eradicating corruption, which is so deeply institutionalized in South Africa.