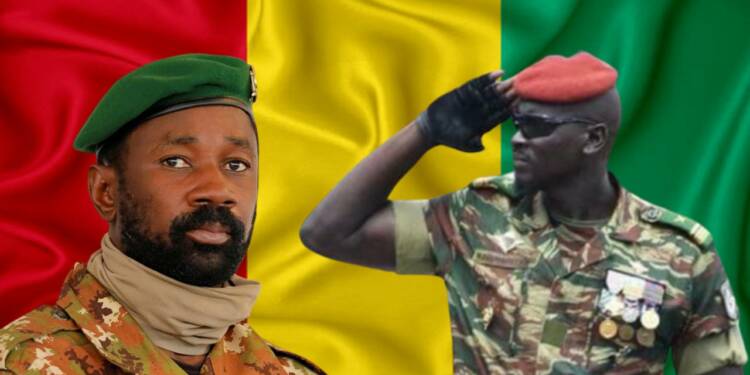 Mali has announced that it will not be respecting the sanctions imposed on Guinea by the Economic Community of West African States (ECOWAS). The 15-member regional bloc in West Africa announced sanctions against Guinea following the military coup when Dictator Conde was overthrown by the military and a transitional government was established under the junta. Mamady Doumbouya, the president of Guinea Junta announced that a return to civilian rule will take place after 36 months which ECOWAS objected to, stating that democratic elections must be held after six months. When Doumbouya refused the ECOWAS’s unreasonable demand, it imposed sanctions on it, without giving Guinea a chance to justify its stand. The ECOWAS, acted in pure violation of principles of natural justice.

It indeed has proved that it is a body that dances on the whims and fancies of its western masters .Mali too witnessed military coups. The military led by Colonel Assimi Goita, toppled the government of President Ibrahim Boubacar, against whom there was a massive public outcry in Mali. Boubacar was a corrupt autocrat. Soon after the establishment of the military government and a transitional council, the ECOWAS imposed sanctions on Mali. These sanctions resulted in a grave economic crisis in the country with Mali being cut off from the regional financial market. Later, ECOWAS removed the sanctions, however, some individual states in the regional bloc have continued their sanctions on Mali despite reconciliation with ECOWAS.

Read more: ECOWAS is a NATO puppet in Africa, and Russia-backed Guinea is their high-priority project

Mali is free from West’s domination

As far as Mali is concerned, the nation has been moving away from the dominance of the West. Mali used to be a member of the G5 Sahel group which is funded and backed by the European Union and led by France. The group was formed to fight Islamic terrorism and armed groups that have popped up in Sahel region. However, the group has often been criticised for its lack of unity and ineffectiveness in curbing the violence, in fact the carnage in Sahel has further increased. Therefore, Mali decided to quit, which prompted Niger’s president to call G5 Sahel a “dead” group.

Mali also abstained from voting during the UNSC vote on Ukraine/Russia resolution which angered the US and the EU which were hoping it to be on their side. Following Niger’s criticism of G5 Sahel in the wake of Mali’s exit, the US thought it was going to follow suit. Therefore, the US government tried to bribe Niger, another important player in the Sahel region and a member of G5 Sahel, by sending its military equipment to Niger.

Guinea and Russia have good relations, the country didn’t participated during the UNSC vote on Ukraine-Russia war resolution. The day after the military coup, president Doumboya received a Russian delegation in Conakry. Just a month ago, the Russian ambassador and Doumboya had a meeting which focused on strengthening diplomatic relations between Guinea and Russia. Guinea is one of the most important economic partners of Russia. Since, Guinea is the second-largest producer of Bauxite, Rusal which is a Russian aluminuim company, has been present in the African nation since the 2000s and owns three mines. Former Guinean leader Alpha Conde too had good ties with Russia.

Mali and Guinea unite against the West

The West, through its puppet ECOWAS, decided to punish Guinea and Mali for moving closer to Russia. The sanctions on the two countries were intended to blackmail the leaders to switch their loyalties to the West. The West took advantage of the political crisis in the two African states. Lack of democracy was used as a pretext by the US and the EU to justify their interference in the matters of Mali and Guinea. The West tried to malign the leaders of both African nations as authoritarian who are on a path to annihilate civilian rule but in reality both Doumbouya and Goita have announced that a peaceful transition to democracy will take place, however it is going to take some time.

Mali realises that Guinea is in the same position as both countries had authoritarian regimes with widespread corruption and poverty. Fortunately, both African states now have governments which stated that a peaceful transition to constitutional democracy will take place. Both Mamady Doumbouya and Assimi Goita understand the significance of political stability and economic prosperity which can be achieved if the US and EU are kicked out of the picture. By refusing to recognise ECOWAS sanctions on Guinea, Mali has sent a clear message to the West and its puppet that it will not tolerate the superpower’s attempt at intimidating Guinea.

Read more: Mali’s military government has a huge bargaining chip to get the dissidents residing in Ivory Coast back