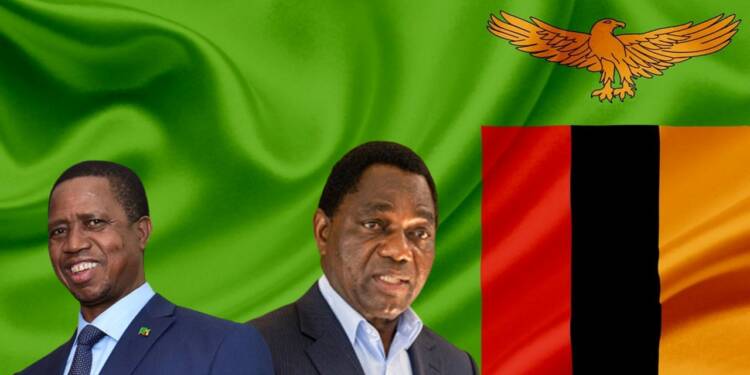 Former president of Zambia, Edgar Lungu said he is ready to face the law if he did corruption during his term. Lungu as well as his family members and ex state officials have been under investigation for corruption. Government officials also visited a land owned by Edgar Lungu for investigation. He has called on the current president and his successor Hakainde Hichilema to remove his constitutional immunity so that he can prove his innocence, saying, “My urge is that may the president institute the lifting of my immunity by going to parliament to lay a case so that he can eventually prove what crimes I committed”.

Edgar Lungu was defeated in last year’s general elections in Zambia by Hakainde Hichilema. Hichilema, who received 58% votes, soon after coming to power, established Zambia’s ties with the West. He visited the US and met Vice President Kamala Harris at the White House, who said he is the first leader from Zambia to visit the US since 1992. In fact, Volodymyr Zelensky held the first-ever talks in the history of Ukraine-Zambia relations with President Hakainde Hichilema, stressing that partnership must be strengthened. In August, Zambia cancelled a USD 1.6 billion loan from China, as it found a new confidante in IMF.

For his loyalty to the West by voting in favour of Ukraine during the UN resolution condemning Russia’s military action, paying a visit to the US, meeting Kamala Harris, personally talking to Volodymyr Zelensky and ditching China, Hakainde Hichilema was rewarded by the US and EU with the International Monetary Fund granting Zambia a USD 1.3 billion dollars loan. The West realised that it needs Zambia to be on its side; therefore it gave a bailout to the crisis-hit country.

Current situation of Zambia being monitored by the West

Now, the West understands that Zambia under president Hichilema is grappling with a severe economic and financial crisis due to corruption, lack of accountability and mismanagement by the government and cutting ties with Russia. The decision to not stand with Russia has taken a toll on Zambia’s economy which is struggling with inflation, poverty, and malnutrition and debt distress.

The West knows that very soon the public mood will turn against Hichilema’s government which is already facing criticism for its reluctance to strike down a colonial-era law under which anyone can be arrested if he/she has defamed the president. Hichilema used this law against an opposition leader, a move condemned by many in Zambia.

The West is afraid of Edgar Lungu

Zambia used to be a good friend of Russia when Edgar Lungu was the president; in fact he personally met Vladimir Putin in 2018, telling, “We feel that now time has come for us not only to cement these relations but to build up what has been existing”. Putin stated that his nation was happy that Zambia and Russia have established partnership in various sectors. Zambia under Lungu, was very close to Russia, as it understood the importance of its backing. In the wake of West dominance, Lungu realised the strategic and economic significance of the ties with the Kremlin.

Edgar Lungu is pro-Russian, so if he wins the next presidential elections, it will be an issue for the US and the EU. The USD 1.3 billion dollar bailout by the IMF is an incentive to Zambia by the West to entangle Lungu in corruption cases so that he is not able to contest in the upcoming elections. The US and the EU are using their puppet Hichilema to hound Lungu and keep him from running in the elections. The current government of Zambia is playing vendetta politics against the former pro-Russian government to appease his western masters. The West wants to settle its score with Russia by pitting Hichilema against Lungu.

In Africa, countries which stood on the side of Russia are taken care of whereas those which back the West are in deep crisis. The West is aware of its falling credibility among African nations and how a domino effect is taking place wherein all countries are one by one turning away from the west. In a desperate attempt the west is now trying to not only topple pro-Russia regimes, but also trying to politically annihilate the pro Russia politicians who stand a chance to lead.

People of Zambia are not foolish, they are intelligent enough to realise that their current president Hakainde Hichilema is working at the behest of the West. They are going to remember in the next elections that their leader Hichilema cares about the US and the EU than their own country.