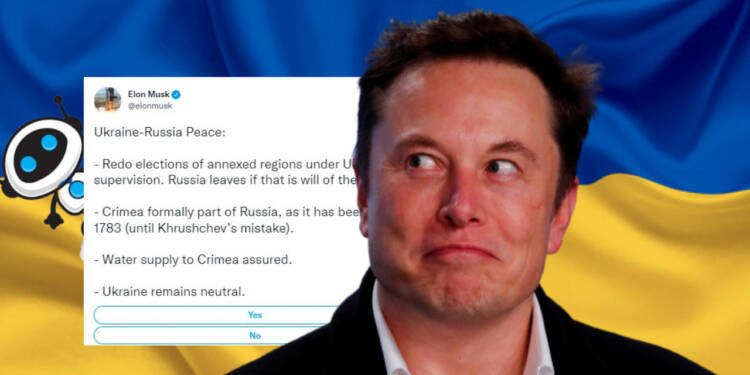 Musk, one of the wealthiest men in the world, suggested UN-supervised elections in four occupied territories that Moscow attempted to acquire last week following what it termed referendums. The referendum was criticised as being unlawful and forced by the governments of Kyiv and the West.

Musk in his tweets said that for now, Russia has only partially mobilised. If Crimea is in danger, Moscow will mobilise fully for war which will lead to devastating deaths on both sides. He emphasised that given the red army’s strength and numbers, a comprehensive military triumph for Ukraine is unlikely. Only peace is the best option for Ukraine and its people.

Let’s try this then: the will of the people who live in the Donbas & Crimea should decide whether they’re part of Russia or Ukraine

With the tweets, Musk added a few polls seeking if the peace proposal is good enough. As one might expect, the poll did not go in Musk’s favour. More than 2.6 million Twitter accounts participated in the poll, and as of the time of publication, more than 60% of those accounts had voted “no” to the “peace proposal.”

He concurred with a Twitter user’s assertion that poll results were being rigged against Musk. “Indeed. Biggest bot attack I’ve ever seen,” Musk replied.

The fact is that even though Ukraine has lost 20% of its territory, it has portrayed that it’s Russia which is licking the dust on the battleground. Furthermore, according to a study by academics from the University of Adelaide in Australia, between 60 and 80 per cent of Twitter handles posting or tweeting about the conflict between Russia and Ukraine are bot accounts. Additionally, the researchers discovered more accounts that were “pro-Ukraine” than “pro-Russia.”

The study titled, “#IStandWithPutin vs #IStandWithUkraine: The interplay of bots and people in the debate of the Russia/Ukraine war” was published on August 20. Only 6.80 per cent of the accounts tweeting about the Russia-Ukraine war were “for Russia,” according to the researchers, while 90.16 per cent were “pro-Ukraine.”

Yes, every 9 in 10 accounts posting for pro-Ukraine are bots. So, given the poll results on Musk’s tweet must not be surprising. When you have such an army of bots, it’s impossible to defeat you on social media.

People initially were manipulated by social media into thinking that ‘Ukraine’ is fighting the bully. However, as soon as the facts have come to light, it has become increasingly clear that Ukraine is just a battleground between US and Russia. As the woes of people have increased domestically, as inflation and cost of living have sky-rocketed, they have realised that peace is the only way forward.

According to the poll conducted by Data for Progress and commissioned by the Quincy Institute for Responsible Statecraft, 49 per cent of Americans believe that Congress and the Biden administration need to do more diplomatically to help end the war.

Also Read: The latest polls conducted in the US suggest that Americans absolutely loathe Zelensky

Similar is the case within Europe. There were huge protests in the Czech Republic and Germany against the EU and NATO which prolonged the war. Europeans realise that if the war doesn’t stop the winters will be very harsh. However, when one goes to Twitter, it seems everything is hunky-dory in Europe. Europeans overwhelming supported Ukraine in the war which is opposite to the actual truth.

Well, when you have a bot army like that of Ukraine, you can manipulate anyone. And therefore, it is almost impossible to defeat Ukraine on social media.