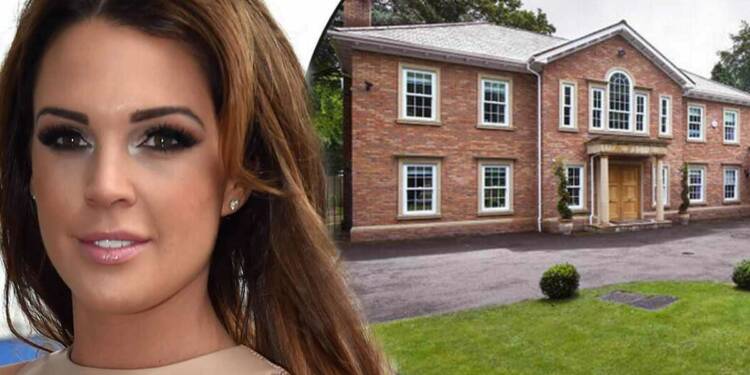 Danielle Lloyd is an English model and television personality. She was born on 16 December 1983.A former Miss England (2004) and Miss Great Britain (2006), Lloyd first rose to prominence when she was stripped of her Miss Great Britain title after posing nude in the December 2006 edition of Playboy magazine. Her title was reinstated in 2010. In this article we are going to talk about the biography, career, notable works, and family of Danielle Lloyd so read the article till the end.

In January 2007, she appeared on the fifth series of Celebrity Big Brother. She won the celebrity edition of The Weakest Link in 2008 and Total Wipeout in 2010.

Danielle Lloyd joined Celebrity Big Brother on 3 January 2007, at the start of the series. Lloyd incurred significant negative publicity about her involvement, with Jade Goody and Jo O’Meara, in a racial controversy with Indian housemate Shilpa Shetty.

Lloyd donated her winnings from both Celebrity Big Brother and The Weakest Link to the Linda McCartney Centre located at the Royal Liverpool University Hospital. Lloyd has also appeared several times on the covers of men’s magazines Maxim, Loaded, Nuts and Zoo Weekly, as well as featuring in FHM and Ice. She has also secured a contract as the face of Ladbrokes Poker.

In 2007, Danielle Lloyd launched a mobile phone safety campaign after her own mobile was stolen in a Liverpool club. The “Keep It Safe & Secure” (KISS) campaign, backed by the National Mobile Phone Crime Unit, encouraged mobile users to take greater safety precautions when using their phone.

In December 2007, Lloyd released a workout DVD entitled Keep Fit, Look Fit. Throughout 2007 and 2008, Lloyd made numerous television appearances including a guest spot on ITV2’s WAGs Boutique and the celebrity edition of Gladiators. She also participated in the “Glamour Models Special” of The Weakest Link, winning £8,950.

Danielle Lloyd appeared in her own documentary, Dangerous Love: A Comic Relief Special (first broadcast on 3 March 2009), which examined the subject of violence against females in teen relationships. In the programme, she described the abuse she received (including a broken cheekbone) during her turbulent relationship and visited organisations funded by Comic Relief.

After finishing school, Lloyd decided to pursue a dual career in modelling and as a beautician specialising in massage. She is a former nail technician. Lloyd married Jamie O’Hara on 26 May 2012. They had three sons together. She filed for divorce from O’Hara in 2014. Lloyd married electrician Michael O’Neill on 6 April 2019. They have one son and a daughter.

Danielle Lloyd was crowned Miss England on 17 July 2004 and competed at Miss World 2004. In February 2006, Lloyd was named Miss Great Britain 2006.On 2 November 2006, she was stripped of her title “following recent claims in the press and magazines and the publicity given on the Playboy website for their next issue”, according to the Miss Great Britain website. Lloyd appeared in FHM magazine and was a finalist of Miss Maxim 2006.

In 2006, Lloyd made an appearance on BBC One’s Test the Nation. She revealed that she thought a statue of former Prime Minister Winston Churchill was a statue for the first black President. Lloyd later would go on to win a special episode of The Weakest Link.

On 2 January 2010, Danielle Lloyd participated in a celebrity edition of Total Wipeout. She cleared all the rounds and went on to win the entire competition. She raised £10,000 for the charity Guiding Light/The Lantern Project.

In December 2010, she appeared on a celebrity edition of Come Dine with Me on Channel 4. She received the highest average scores from the other contestants and won the competition. She donated her prize money to Bliss, the special care baby charity. In 2014, Lloyd participated in celebrity show Splash! On 18 January 2015, Lloyd took part in celebrity talent show Get Your Act Together.

We hope this biography article of Danielle Lloyd will be helpful for you to understand her journey and works.