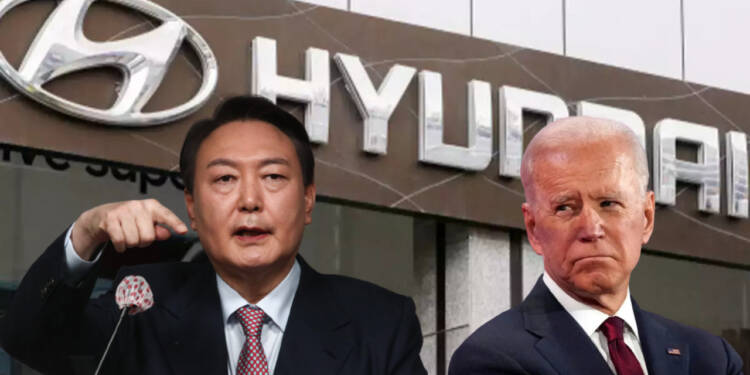 Since the ceasefire ending the Korean War in 1953, businesses in the United States and South Korea have been closely linked. A partnership that was first characterised by import-dependent development assistance evolved into a dynamic bilateral economic relationship that peaked in the 2011 ratification of the Korea-U.S. free trade agreement (KORUS).

South Korea is the United States’ sixth-largest economic partner, with annual trade between the two countries totaling $168 billion in 2019, the year before the COVID-19 pandemic struck. That is a significant progression.

All was going fine until American President Joe Biden brought Inflation Reduction Act. The new legislation, however, only supports electric vehicles assembled in North America. South Korea views the EV sections of the Inflation Reduction Act as being both against international trade laws and the two nations’ growing economic relationship. According to a South Korean official, the measure is a “betrayal” and may harm collaboration in other spheres of the relationship.

A $7,500 tax credit is available under the Inflation Reduction Act for electric vehicles made in the country. Presently, 26 of the 32 EV models available in the US are made here at home. Only the Nissan Leaf and a few European models are produced in the US of the total. Currently, all of the EVs sold by Kia and Hyundai are produced abroad, disqualifying them from the tax credit. The tax credit is subject to new limits starting in 2023. Vehicles must still be made in the United States, but additional specifications have been imposed regarding the mineral composition and EV battery parts.Under the present Democrat government, the US has already lost a large number of allies and is certain to lose some more. Close US allies with specialised car sectors, such as South Korea, Germany, and Japan, provide significant economic contributions, but their relations with the US are on a decline.

Also Read: South Korea and EU join forces to launch an economic assault on US

In retaliation to Biden’s Inflation Reduction act, South Korea has brought a historic bill known as the “anti-Google law” that significantly alters how internet giants like Google and Apple run their own app stores, the Google Play Store and App Store, in the country. Although the legislation is known as the “anti-Google law” in reference to the dominant search engine, it will bar Apple and Google, the two firms that run the biggest app shops online, from requiring app developers to utilise their in-app payment systems when creating apps for their app stores.

This new regulation limits the commissions that internet behemoths like Apple and Google charge app developers in the nation for in-app purchases made through their respective app stores (App Store and Play Store). It will significantly affect these retailers’ revenues, which are essentially cash cows for both of these businesses. This legislation may serve as a model for other nations to enact similar legislation, thereby ending Apple and Google’s monopolies in their respective app stores with regard to in-app payment-related commissions.

Clearly, South Korea has decided that if the US attacks its companies’ revenues, it can also attack theirs. The IRA proposal would prevent automakers from allied countries operating in the US from receiving the tax break, though. Biden’s disregard for the interests of allies has emboldened these countries, who are now seeking to take on the US at the WTO.  In order to develop a coordinated response against the anti-trade move of US, Seoul has also stated that it will soon engage with the EU. With the “anti-Google law” it has sent a warning to US that it can teach a lesson by itself to US.