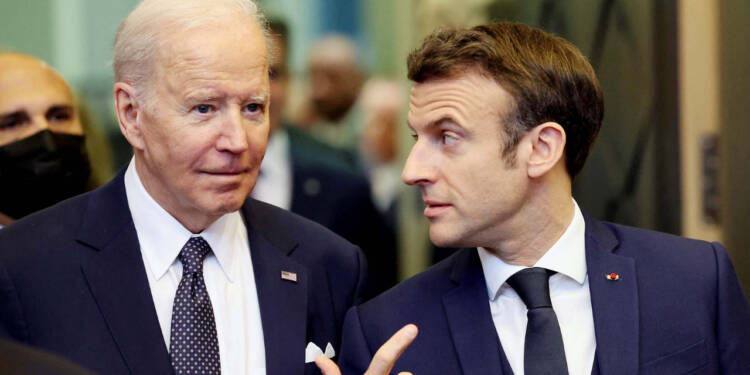 The tallest leader in Europe, France’s President Emmanuel Macron suggested that EU should begin a coordinated effort, to secure the safety of undersea gas pipelines. The proposal was made after the Nord Stream pipelines experienced a fourth gas leak following intense pressure decreases late last month. Macron stated that the European Union needed to develop a plan to safeguard vital infrastructure.

Who’s behind the sabotage?

As the details come to light, it is becoming more and more obvious that the US was involved in the sabotage of the two Nord Stream pipelines. According to data from Flightradar24, on September 1, 2, and 3, a US Navy Sikorsky MH-60R Seahawk helicopter spent hours hovering above the region of the ruptured natural gas pipelines in the Baltic Sea close to Bornholm. Additionally, Joe Biden himself had stated in February that he’ll put an end to Nord Stream 2.

In addition, since this time last year, the US has sent more gas to Europe than ever before. It will be evident after viewing the graph below. By selling its LNG to Europe at spot rates, the US has made billions of dollars. Only a regulatory barrier was obstructing the flow via the pipeline prior to this sabotage. Europe’s need to restart the pipelines was becoming more and more obvious as it struggled to avoid deindustrialization, the recession, and cold winters. If pipelines had resumed, the Ukraine War’s trajectory would have been different and Europe would have been spared its suffering. The US may now breathe a sense of relief because both pipelines have sustained significant damage and it’d be able to maintain its market and capitalize on the war.

French President Emmanuel Macron during a news conference following the Informal EU 27 Summit and Meeting within the European Political Community in Prague has made a proposal. He said, “We need to protect our key infrastructure. We saw that a few days ago with the attacks against Nord Stream 1. We have the key infrastructure, critical infrastructure which concerns the EU and the other European countries, gas pipelines, cables satellites. We need a European strategy to protect them, and this is a common policy, it is not just a matter of the EU but for all countries represented around this table.” Explosions near the pipelines were verified by a Swedish Security Services investigation into the Nord Stream terrorist attacks, which was finished on Thursday. This increases the likelihood that sabotage was involved.

Macron has said that the proposal has been already made to few countries. He continued, “We have proposed to a number of countries with gas infrastructure in the North and Baltic Seas to start a coordinated operation, which we are doing regularly, to ensure infrastructure security, as well as to establish more frequent monitoring of it.”

Macron realises that the sabotage is a big blow to Europe before the Winters. Therefore, he doesn’t want to risk any more pipelines that bring energy to Europe. Another sabotage can be a source of great mayhem among the public and lead to civil wars. And, as evidence suggests that US is behind it, he didn’t go to NATO for its security but rather asked European Political Community to protect its infrastructure.

Moscow referred to these events as acts of international terrorism and sabotage. Russia President Vladimir Putin, claimed that the attacks on the energy infrastructure of Europe were planned and hinted that the US and Britain were behind the explosions. The occurrences are being looked at as potential acts of international terrorism by the Russian prosecutor general’s office.

Macron realises who is behind the sabotage and therefore doesn’t want to risk it any others. Furthermore, fearing that a similar fate awaited Norwegian pipelines, Norway’s prime minister announced that the country will deploy its troops to guard its oil and gas installations against potential sabotage.

Also Read: Norway has deployed its military to save its gas pipelines from Biden

Consequently, Norway realizes that it can be the next target of US. And if that happens, US will eliminate its major competitor in Europe. Norway understands US’ conspiracy and doesn’t want to risk any harm to its oil and gas installations.