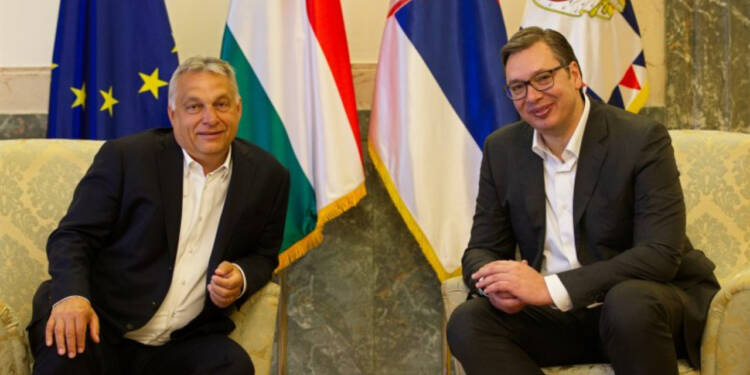 For the European Union, it is almost like a call of duty to extend solidarity for Ukraine, even if it means harassing its citizens. In response to Russia’s escalating military aggression against Ukraine and liberation of four Ukrainian areas, the EU last week approved the eighth set of sanctions. However, two significant European nations are agitated by these new restrictions.

The first was once a part of Yugoslavia, whereas the other is a friendly neighbor of the present-day Russia. Your guess is as good as mine, these countries are  Serbia and Hungary. According to reports, these two countries are developing a new Russian policy entirely independent EU’s machinations.

Amid the new set of sanctions imposed by the European Union, which purportedly also target oil flow in a number of pipelines. And now, several rogue member states are now thinking of preparing their own energy lines. According to a media report by Al-Jazeera, Serbia and Hungary have announced the construction of an entirely new pipeline so that Serbia could receive Russian oil from the southern Druzhba pipeline. Reportedly, as the EU’s new sanctions shut off oil links between EU member states and other third countries, Hungary offered to construct a pipeline to supply Serbia with Russian crude oil. The statement was made on Twitter by Zoltan Kovacs, the government spokesman for Hungary, who cited the new sanctions as one of the major factors that contributed to the new agreement.

1/2 @avucic and PM Orbán have agreed to build an oil pipeline to Hungary. The new oil pipeline would enable Serbia to be supplied with cheaper Urals crude oil, connecting to the Friendship oil pipeline.

Kovacs took to Twitter to announce the new agreement. On his Twitter, Kovacs said, “@avucic and PM Orbán has agreed to build an oil pipeline to Hungary. The new oil pipeline would enable Serbia to be supplied with cheaper Urals crude oil, connecting to the Friendship oil pipeline,” Furthermore, he added, “At present, the country’s oil supply is provided largely via a pipeline through Croatia, but this is unlikely to be possible in the future because of the new sanctions that have been adopted,”

The new European Union sanctions limit oil supplies to Serbia via Croatia, the Hungarian government is stressing, and they’re not wrong at all. Historically, Serbia used to receive most of its oil from Russia through the JANAF oil pipeline which passes through Croatia. In 1979, when both Croatia and Serbia were a part of the former Yugoslavia, the JANAF oil pipeline was formally launched and put into operation. The flow of oil via this pipeline remained unhindered until this September end. But last week, the EU placed an oil price cap for Russian seaborne crude deliveries to third countries as part of sanctions imposed due to Moscow’s war against Ukraine. Due to this, Serbia became an unwanted casualty.

Serbia for a long has been eyeing to diversify its energy supplies. Last month, a report on Serbian energy security was published, which stressed: “At the moment, Serbia is limited to the supply of natural gas from only one supplier, which is why the diversification of suppliers is just as important as the diversification of routes,” Serbia might have discovered a better choice thanks to this new pipeline. While this also helps in achieving Hungary’s long-term objective of becoming a leader in the energy infrastructure of Eastern Europe.

Read More: Serbia vows to denazify the Balkans, and it has Russia written all over it

Furthermore, it is important to see how two countries that are Eurosceptic are coming together to form a new partnership. Hungary has consistently criticized EU’s reckless attitude toward Russia. The leader has often criticized the sanctions whereas, Serbia has also been critical of the EU in the aftermath of the Ukraine war. Serbian President Alexander Vucic has often refused to toe the line of the European Union, despite the fact the nation eyes to become part of the declining union.

Additionally, relations between Serbia and Croatia, a member of the EU, have never been great. When these new EU sanctions were aimed at the Serbian oil pipeline, Andrej Plenkovic, the prime minister of Croatia, voiced his attitude toward Serbs and stressed, that they (Serbs) could obtain energy from elsewhere. Serbia can have all the oil it needs, he continued, “except Russian.” Belgrade, however, did the exact opposite.

Read More: Hungary is set to become the energy capital of Europe

Budapest and Belgrade are crafting a fresh independent Russia policy that is free from the clutches of the EU. Back in July, we at TFI had predicted that Hungary would become the energy capital of Europe. Guess what, the first signs are already here.

Morocco is now the chair of African Union’s Security Council, and its first message to the West is brutal