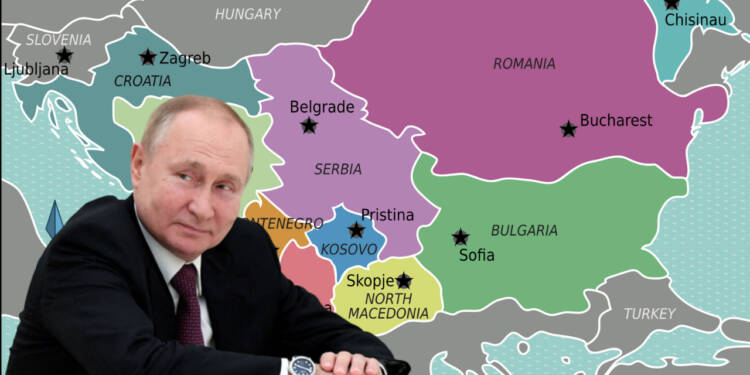 Denazification is a word you may have heard thousands of times since the inception of the Ukraine war. Russian President Vladimir Putin had explained his goal of invading Ukraine in order “to protect the people, demilitarize and denazify Ukraine.”

It has now become a buzzword and it needs to be taken seriously. A Balkan nation has sworn to denazify the Balkans and this means that the whole region may be under siege by Russia.

The tensions between Kosovo and Serbia have just cooled, but Serbia has decided to take up the cudgels. Rattled by Kosovo’s recent action, it has pledged to get rid of Nazis within the Balkans. The representative of the Serbian Progressive Party (SNS) in power from the National Assembly of Serbia, Vladimir Djukanovic, announced the “denazification of the Balkans“.

Vladimir Djukanovic on his Twitter handle announced: “It seems to me that Serbia will be forced to begin the denazification of the Balkans. I would like to be wrong,“

His tweet triggered a strong reaction among Social media users within Europe. The politician was reminded that Russian President Vladimir Putin used “denazification” as a pretext to attack Ukraine. Later on, the leader clarified, “Well, the world was upset when I wrote that Serbia might have to initiate the denazification of the Balkans. I understand that they have always supported every Serbian enemy,”

So, Serbia is pretty sure that actions against the Anti-Serb nations are necessary. But most likely, these words might not be from Serbia. This might be Russia vowing to make Balkans a vessel state of Serbia under its ‘Great Russia’ plan.

Return of an Era

During the Cold War, most of the nations in the Balkan region were ruled by Soviet-supported communist governments. The late 1980s and the early 1990s brought the collapse of Communism in Eastern Europe along with the disintegration of the USSR.

Russia has expressed its willingness to re-establish the lost glory of the USSR as a part of ‘Imperial Russia’ of which the Balkans were also a part. But, there’s a snag, Moscow cannot just invade and “de-nazify” as it did in Ukraine for such a purpose.

Most of the Balkan nations are now part of the NATO alliance and this means the West would interfere the very moment Russia decides to enter the region. However, Serbia can do its bit for Moscow.

Balkans would be a vessel of Serbia

Serbia’s close ties with Russia have helped Russian influence flourish throughout the Balkans. Even during the recent discontent between Kosovo and Serbia, Russia had warned Kosovo of the consequences if it continues to attack Serbs.

Since 2016, Serbia has been home to Russia’s humanitarian center. Furthermore, Serbia has always remained a point of contention for the EU and NATO.

The West believes that with the help of Moscow, Serbia could annex Balkans and reduce western influence there. And to be honest, the recent statement of Djukanovic has made it more certain that it may happen.

Serbia already has Yugoslovia’s Soviet-era weapons systems out of which, most of them have been imported from Russia. And we all know that Serbia would surely get more aid from Russia when it desires. On the other hand, NATO’s defense policy has never been tested.

NATO has not deployed its troops within Ukraine to defend the Ukrainian territory, so it would be foolish of countries like Bosnia, Montenegro, Albania, and Croatia to expect any help from NATO.

Read More: NATO with Kosovo, China with Serbia and a mini world war in the making

Connect the dots, the pledge of Serbia to ‘De-nazify’ Balkans came immediately after the Russian warning to Kosovo. Serbia is eyeing to re-establish Yugoslavia’s glory. In the future, Serbia might be leading the de-Nazification process, but ultimately Russia would be pulling up Serbia’s strings.

Collection of 31 Hopeless quotes and captions