London museum is a blatant display of Africa’s stolen wealth 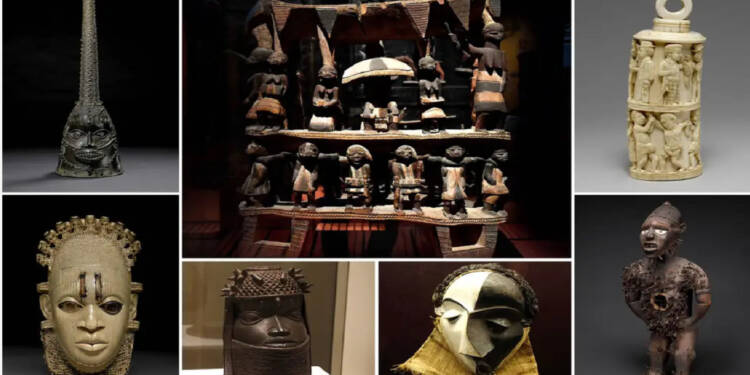 If there’s good, there’s bad too. There needs to be some balance on the Earth to run it smoothly. The world was a very good place; all people were living in peace and then came the colonizers, primarily the British Empire. An evil force to balance out the good in the world and its consequences are still visible all over the world.

Recently, the US repatriated 29 artifacts to Nigeria in a bid to stop the smuggling and theft of the traditional values and culture system.

One of artifacts that have been returned to the Nigerian government is a bronze sculpture of a West African king that was held in the collection of a Rhode Island museum for more than 70 years.

One should not be influenced; by this gesture of the west as it is one of the many things the west is doing in its efforts to impress the African continent, in this case Nigeria for its own ulterior motives.

The bronzes were stolen during 1897, when the British ransacked the Benin Kingdom, which is modern day Nigeria.

The Oba (ruler) was exiled when the royal residence was sacked and torched. All royal treasures were seized by the British, who distributed some to specific officers and auctioned off the rest in London. About 3,000 items subsequently found their way into private and museum collections all across the world.

The British museums are an epitome of plundering which the British committed across the world, especially in its colonies. The museums might majestically display of the extent of the British Colonial Empire, but the history of its acquisitions is a very tragic story to tell. After the death of the queen, a picture surfaced on the internet which marked that all ornaments and other jewelry the queen is rearing is from the plundered nations all around the world. This in itself is enough to prove the true character of the erstwhile colonizers who bask in everything that is not their own. The amassing of artifacts was so huge that the cultural ministers of 150 countries have pledged ‘more action’ to repatriate priceless antiquities.

The pledge came amidst rising calls of repatriation of historic legacies which were illegally smuggled or unethically taken. The death of the queen has sparked an argument that the artifacts must be returned. The countries include Egypt, Nigeria, Mexico, and India, Kenya among others.

Today, we address a historic injustice by returning the Benin Bronzes, magnificent examples of Benin's culture and history. Through this repatriation, we acknowledge a legacy of cultural theft and do our part to return African culture to Africans.

The culture minister of Nigeria has also urged the United Kingdom to return Nigerian artifacts by emulating the example of the US. Lai Mohammed appreciated the US National Museum of African Art, which follows a recent restitution agreement with Germany that facilitated the handover of two Benin Bronzes to Nigeria.

Mohammed while exposing the British loot, stated, “These are not just objects of beauty who have aesthetics. These are artifacts that speak to who we are and that speak to our history, our religion, our values and ethics.”

While remembering how British MPs told him that their museum is confined by law not to give away or sell items present in its collection.

“They should learn from what has happened today and what happened in Germany,”

“They used the law as a shield. This is not about law; this is about ethics,”

“I told them the last time I was in London: it’s not if, it’s when. They will eventually have to return these because the campaign is gaining strength by the day and, when they look at what other museums are doing, they will be compelled to return them.”

The United Kingdom or the museum authorities in the UK should understand that these are not beautiful items which are meant to decorate the British museums or any other museums for that matter. These sculptures are the property of indigenous people and the British should understand this and should come out of their colonial slumber. These artifacts signify who the indigenous people are and their language, religion, history and values.

Ngaire Blankenberg, director of the Smithsonian’s National Museum of African Art which repatriated the Benin Bronzes, stated, “The debate is so ridiculous because there are so many false premises. People are like, ‘Oh, no, if you give everything back, that’ll be nothing in this museum.’ I mean, honestly, we have over 12,000 collections and if our whole museum is based on stolen objects, then frankly, we shouldn’t exist,”

Even there are instances in the past where countries have called for the return of their culturally important artifacts. In Egypt, prominent archaeologists have called for the return of the Rosetta stone from the British Museum to Egypt. This is occurring after 200 Years when the deciphering of the slab unlocked the secrets of hieroglyphic script and marked the birth of Egyptology.

The Rosetta stone traces its history from 179 BC and was unearthed by the Army of Napoleon in the area of northern Egypt in 1799. British took it from Napoleon after defeating him and forced him to Sign the 1801 Treaty of Alexandria.

The nations of the world are demanding back their history and what’s theirs. There’s nothing wrong with it. The British should understand the statement of the Blankenberg— “If our whole museum is based on stolen objects, then frankly, we shouldn’t exist,…”

The glory in which these chain of British museums bask, is nothing but manifestations of their looting and plunder accompanied with killings of millions of people over centuries of violent and bloody rule.