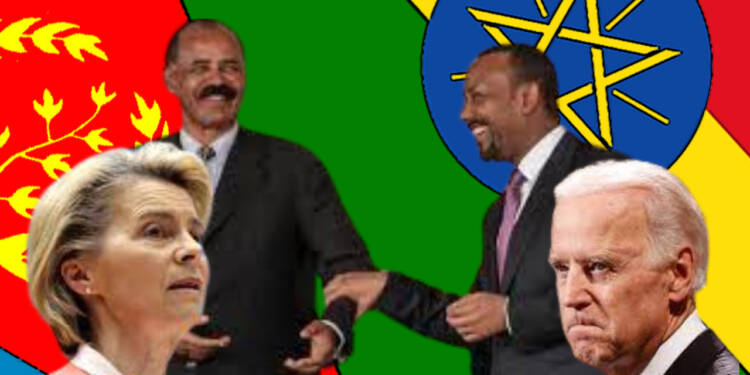 The West is using every method in its book to break the territorial integrity of countries which refuse to follow its diktat. Its call for peace is always a strategy to cover up its bad intentions. Manipulation has always played a central role in the foreign policy of the US and Europe.

Recently, Mike Hammer, the US envoy for the Horn of Africa met with Ethiopia’s Deputy Prime Minister Demeke Mekonnen in the capital Addis Ababa, as part of efforts to end the Tigray conflict. The US urged the federal government of Ethiopia and TPLF to start peace talks and asked Eritrea to withdraw its forces from the Tigray region.

The war between Ethiopia, Eritrea and Tigray People’s Liberation Front has been going on for too long. Forced to defend his country’s sovereignty and territorial integrity, Abiy Ahmed decided to get rid of this menace called TPLF and bring peace back to his people. Initially, only Ethiopia was involved in this war but later Eritrea joined in as one of TPLF’s objectives was to invade it.

Ethiopia was on the back foot when it was dealing with the TPLF alone but with the entry of Eritrea, TPLF suffered a huge defeat. The spokesperson of the group acknowledged that it was forced to retreat to its base. The West is well aware that as long as Ethiopia and Eritrea are united, the TPLF will not be able to further its agenda. Therefore, the US and EU want to break the alliance between Ethiopia and Eritrea. The West thinks that an isolated Ethiopia will be easier to take on.

The US is trying to manipulate Ethiopia by sending its special envoy for the Horn of Africa. The real reason behind West’s appeal for peace talks is to buy more time for the TPLF, which has suffered huge losses, to recover. The peace proposal by the West is a diversionary tactic, to draw the attention of Ethiopia and Eritrea away from the vulnerable state of TPLF. The TPLF is badly defeated, its personnel have been killed in large numbers and funds have been exhausted.

The European Union passed a resolution which accused Eritrea of invading Ethiopia. The resolution, which doesn’t have an ounce of rationale and is not based on any evidence, is trying to instigate hostility between Ethiopia and Eritrea. Through this resolution, the EU is trying to break the alliance between the two countries which have managed to put an end to the West’s efforts in creating political instabilities in Ethiopia through TPLF.

Biden and his allies know that in order for their mission to be successful, Ethiopia’s isolation is a must. These UN investigations, transport of weapons and funds to TPLF in the name of humanitarian assistance and initiation of peace talks are meant to weaken Ethiopia. The US is also trying to make sure that Ethiopia does not have the backing of any country, therefore the European Union has passed a resolution stating that Eritrea has invaded Ethiopia. By passing such a resolution, the West is trying to create resentment against Eritrea and Ethiopia.

However, just like Ethiopia and Eritrea were able to prevent the numerous attempts by the US and EU to overthrow their governments, steal their resources and harm their citizens, these plans of Biden and his allies will also suffer a major defeat at the hands of Abiy Ahmed and Isaias Afwerki.