Balkan ghosts are out to haunt Europe again

With every kind of crisis knocking on its doors, from fear of being fragmented to people’s eroding trust in it, the EU has finally decided to be humble 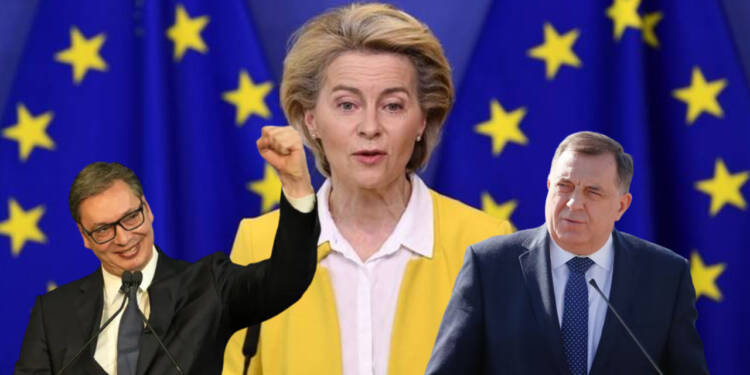 European Union has been a powerful organization since its birth in 1993. Consisting of powerful nations like Germany, France, and Italy, the Union has always seen itself as the saviour of the European continent. Many nations joined it soon after its formation to get into its protective shade. But, many struggled hard to be a part of it. For instance, North Macedonia, Montenegro and Serbia, all waited for years and years. Their progress sometimes got held up because of objections from even a single EU country! Though they are placed on the consideration list, they didn’t get any true attention from the EU till now.

How the tables have turned

Philosophers weren’t playing when they said “It’s better to be humble and happy than to be arrogant and lonely”. The Union leaders might be rubbing their heads now that the reality of this saying is hitting them hard. Just as the Russian-Ukraine conflict started, everything changed in the Western world. The superpowers are crawling on all fours to get a way out of this misery they embarked upon thoughtlessly and selfishly.

Read More:By sowing discord between Montenegro and Serbia, NATO has again pushed the Balkans into turmoil

After Europe sanctioned Russian energy imports, doom fell on the whole continent. With time, the leaders are realizing that it is better to have more and more members in the bloc so that they can support one- another in the times of crisis. Consequently, statements of enlargements of the EU started brewing and it is in no time that they occupied headlines of all the newspapers.

Olaf Scholz, the German Chancellor turned heads when he announced recently his will to extend EU membership, especially towards the east. He said, “A united European Union of 27, 30, 36 states, with then more than 500 million free and equal citizens, can bring its weight to bear even more strongly in this world,”

He further added that EU growing eastward is a win-win for all of them. He even stressed for reforms like military autonomy and majority decision. Surprising isn’t it? Especially coming from the leaders of a hubristic organization! Fascinating is the fact that the organisation last expanded in 2013 when it accepted Croatia who applied for membership in 2003!

But interestingly, not only the German chancellor, but the EU itself, in its annual enlargement report, is seen taking complete u-turns from its previous rigid stance on granting memberships, especially to Balkan nations.

EU enlargement commissioner Oliver Varhelyi told that the EU executive recommends a grant of candidate status to Bosnia. Curious is the fact that the nation still doesn’t fully comply with the EU’s so-called standards that are needed for membership.

Not just Bosnia, the EU is opening its arms to Serbia as well. Serbia, the one country that tried for decades to be a part of the “holy” bloc. There is no doubt Serbians must have gone into total shock when they heard the news.

Ironically, when the EU is coming to the Balkan nations requesting them to become a member of the Union whose lustre is waning, the Balkans are in no mood to breathe life into EU’s dying body.

Serbia is coming out as the torch-bearer of the Balkans in giving EU the taste of its own medicine. Serbian interior minister, Aleksandar Vulin, stated that Serbia should accept that the EU doesn’t want it and that it has no place in the EU. He pointed out that the EU is just blackmailing the nation into fulfilling its own diktats and interests. He said that EU can’t force them to sanction Russia, recognize Kosovo and abolish Republika Srpska, for membership.

He added that States have a memory, pointing towards the 2015 UNSC resolution against Serbia, which Russia vetoed. He said Serbia can never forget how Russia prevented the EU from declaring Belgrade guilty of genocide.

Interestingly, Serbians as well do not want to be a part of the EU anymore. In a poll conducted in April itself, the number of Serbians who are against joining the European Union got higher than those who want to become a member.  The poll, which was conducted by Ipsos, revealed that 44% of participants are against membership while 35% are in favour. We should keep in mind that this was back in April when the Ukrainian conflict just started. One can clearly make out what will be the people’s response if a poll gets conducted recently.

Well, it is a no-shocker that the Balkans are no more attracted to EU. No nation in its right mind will join EU today when it is failing on every front to protect its members and to stand against the dictatorship of the US. The war showed all the loopholes of the organisation and also, how all the members are just sucking benefits from each other without caring about their citizens. Ukraine and Moldova only got candidature in June, definitely, the reason was war. With the rise of the individual identity of every nation and with the coming of Conservatives in power who are tilted towards history and culture, EU’s dream to prosper again by walking all over the smaller nations will never get fulfilled.