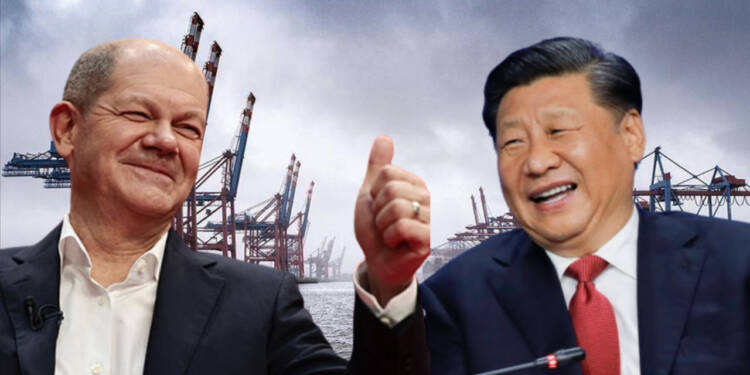 The German Chancellery appears to seek to sell parts of the Hamburg Port to a Chinese state-owned enterprise despite protests from all relevant ministries.

NDR and WDR data indicate that the deal has been rejected by each of the six ministries taking part in the investment evaluation. The analysis reveals, however, that the Chancellery is pressing for the Chinese entrance to happen.

If that happens, a third or more of the Hamburg container terminal at Tollerort will be owned by the Chinese shipping giant Cosco, along with shares in the port operator HHLA. Due to the importance of this infrastructure, the leading Ministry of Economics had already begun the investment evaluation process and, according to the research, had already registered the matter for the Federal Cabinet’s final rejection.

The test procedure, however, was not added to the schedule by the Chancellery. A ban requires a cabinet decision, which could not be made. Instead, the Chancellery has reportedly told the concerned agencies to seek a solution so that the agreement may still be authorised, according to reports from NDR and WDR.

The acquisition of Hamburg port is a part of Beijing’s larger strategy to obtain control of infrastructure vital to its ambitious Belt and Road trade programme, a web of transportation links meant to connect Chinese companies with lucrative Western markets. For Beijing, a stake in Hamburg, the third-largest port in Europe, is just another piece of that puzzle.

Cosco already has shareholdings in the two largest ports in Europe, Rotterdam and Antwerp, as well as control over the Port of Piraeus in Athens. Additionally, Cosco is in charge of a plan to expand an inland rail terminal at Duisburg, which is a major hub for overland freight arriving from China’s industrial hubs.

However, the acquisition attempt hasn’t been well received by everyone especially the Greens Party which is in coalition with the government. Germany’s Economic Minister Robert Habeck has stated frequently that Germany is reviewing its broader trade strategy with China. Germany’s economics ministry is in charge of conducting a review of the contract as part of an investment screening process. In order to formally oppose Cosco’s port acquisition, Habeck’s ministry reportedly tried to place the topic on the agenda of a federal Cabinet meeting.

Factually saying, the Greens Party of Germany doesn’t want Berlin to have any kind of investments from China. Especially, Annalena Baerbock, Minister for Foreign Affairs of Germany, who is from Greens Party is completely anti-China. So, it is unlikely that the Greens would let this move of China pass so smoothly.

Also Read: ‘Gift weapons to Ukraine at your own risk,’ EU’s latest warning to European nations means tragedy for Ukraine

Though, Scholz’s chancellery has insisted that the departments produce a solution that can be adopted as the government faces a legal deadline for a decision at the end of October.

In the ARD magazine “Panorama” (NDR), Rolf Langhammer from the Kiel Institute for the World Economy said, “The long-term strategy of the Chinese could of course be to seize control of the entire supply chain, both digital and maritime in Europe.”

According to port operator Hamburger Hafen und Logistik (HHLA), 30% of the containers handled in Hamburg are transported or arrive from China. The acquisition would be finalised according to the legislation if the federal cabinet does not decide and no extension of the deadline is agreed upon.

German business groups have also levelled a grave charge that the Chinese side is applying pressure on German firms. It states specifically that the embassy recently made direct contact with German businesses. Working for Chinese admission into Hamburg’s port is necessary; failing to do so might have negative effects on one’s own company.

The former President of Sri Lanka gave the Hambantota port project in the island nation to China in the same manner, however now it’s widely evident that it was the earliest example of China’s “debt trap” strategy.

Germany is preparing for its first Hambantota moment, and Beijing would have no qualms about transgressing German sovereignty. Its Chancellor Olaf Scholz is just vowing to please his Chinese masters before his planned trip to Beijing, scheduled for November 3 and 4.