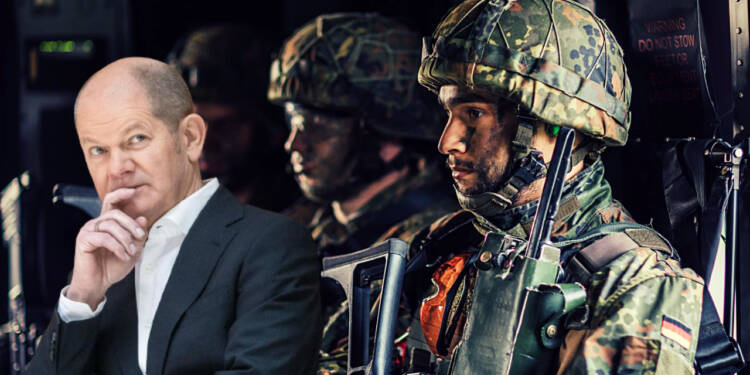 There should be no doubt that the Federal authorities of the West have a puppy love for the leaders in Kyiv. Germany has been the European Union’s most fervent proponent of Ukraine. Berlin provided Ukraine with 50 bunker-buster missiles, 21.8 million rounds for weapons, and 53,000 rounds for self-propelled anti-aircraft guns.

However, the Bundeswehr (German Military) has suffered dramatically due to this blind love. Business Insider previously reported that Germany only has two days’ worth of ammo, much less than the NATO minimum or even the standard for a small militia.

As Germany’s coffers are now left with just a few pennies, Olaf Scholz is abandoning the “pipe dream” of making Germany a dominant military of Europe. According to German news media outlet Handelsblatt, the German government has decided to cut funds of several armament projects. Thanks to the strong dollar and high inflation, which is raising the cost of planned weaponry purchases, the Federal government is making cuts and responding to the Court of Auditor’s censure.

This is a major setback for Olaf Scholz’s Government because, in March 2022, Germany had built a ‘pipe dream’ to revamp its military. Germany had decided to dramatically beef up its defense budget and give the Bundeswehr an extra €100 billion.

This €100 billion fund was anticipated to be used in purchasing, F-35 fighter jets, new frigates, and howitzers, and for the heavy transport helicopters modernization of the Patriot Air Defense Missile system.

But now, Berlin has a change of heart. The federal government is now massively cutting the planned equipment purchases for the Bundeswehr. Major projects, including the ones of naval and air forces, are now being considered to be called off. Berlin is considering canceling the third tranche of the K130 corvette, new Eurofighters for electronic warfare, new frigates, and some new self-propelled howitzers.

Furthermore, the second batch of the Puma infantry fighting vehicle, for which 304 million euros were estimated this year, is also being slashed.

The Bundestag stresses that the inflation-related increase in purchase prices and growing interest expenses for the loan-financed special fund have made it difficult for the Deutschland to move ahead with their ambition, so they are ready to compromise.

Bundeswehr: In need of an overhaul

This bombshell decision has unquestionably distressed the military experts of Germany. The representatives from the armaments industry have complained that the budget of 100 billion euros was never enough.

It has been stressed that 200 billion euros are needed to fulfill the Bundeswehr’s wishes. In its report on the draft of the economic plan, the Federal Court of Auditors also criticized the fact that the planned total expenditure exceeded the financial framework of 100 billion euros, which is far below the requirement for overhauling the military.

And why not? The state of Bundeswehr is so miserable that even 200 billion euros might fall short for a total overhaul. As per Berlin’s own estimates, only 50% of some major hardware is operational.

For years, reports have circulated on the internet that shortfalls in the German army’s personnel and equipment are “dramatically” hindering its readiness for combat.

The condition of the military’s fleet of fighter planes, tanks, helicopters, and ships is “dramatically bad.” Furthermore, there is a lack of spare parts and outdated equipment, leaving “big gaps” in the armed forces.

Read More: So, Germany sent a pile of garbage as weapons to Ukraine

The country needed to concentrate on replenishing its stock while avoiding depleting the current ones, but Olaf Scholz didn’t consider that. Germany’s dream to revamp its military is nearing a tragic end. Olaf Scholz’s irresponsible decision to provide military assistance to Ukraine has ruined the already troubled Bundeswehr.

NATO is the sole power on which Berlin must currently rely since it is the only thing that could keep Deutschland out of serious jeopardy. But will NATO do so? The answer hangs in a predicament.