Zelensky’s clarification about Crimea bridge bombing – too little too late 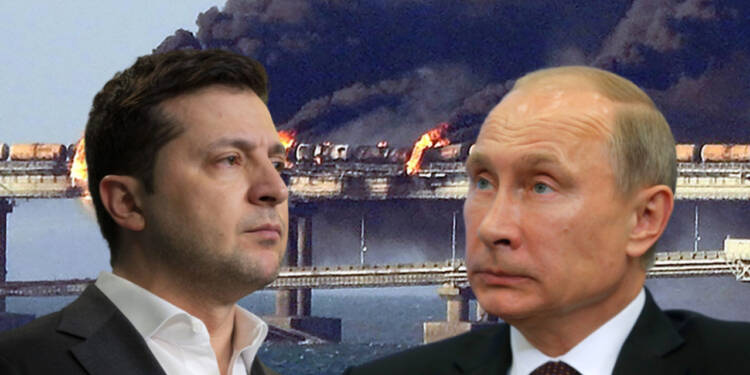 Ukrainian President Zelensky is trembling after the Ukraine authorities ordered the Crimean bridge bomb attack. The retaliation by Russia has woken the Ukrainian regime from its slumber. He realised that if Russia goes all out, it won’t take much time to siege Kyiv.

Zelensky has clarified that Ukraine isn’t behind the Crimean bridge bomb attack. Zelensky said, “We definitely did not order that, as far as I know.”

The Russian dictator Vladimir Putin accused “Ukrainian intelligence” of destroying the Crimean bridge. The Crimea Bridge links mainland Russia to the Crimean Peninsula of Ukraine, which Moscow annexed in 2014. It served as a crucial supply route for the Russian forces that were invading and occupying southern Ukraine.

On October 8, a large explosion caused damage to the bridge, destroying a span and burning a gasoline train that was passing by. The train bridge was subsequently destroyed by the ensuing fire. While speaking to the Canadian CTV news outlet Zelensky tried to spin the narrative and blame Russian domestic conflicts for it.

The morning of October 10 saw the firing of 84 missiles by Russian troops on Ukraine. The most important coordinated missile strike against Ukraine since the full-scale invasion started on February 24 saw Russian missiles and kamikaze drones striking downtown Kyiv and other large cities in Ukraine.

Earlier, Serhiy Nayev, Commander of the Joint Forces of the Ukrainian Armed Forces, too had suggested that a battle between rival Russian security and intelligence services may have been the cause of the bridge attack.

Also Read: Ukraine marches directly into the lion’s den by staging another deadly attack on Russia

Ukraine, drunk on the euphoria of victory resorted to attacking the Crimean bridge after gaining a few square kilometres in its counter-offensive. The Crimean Bridge bombing was celebrated all day long on Twitter by the Ukrainian administration. Its intelligence agencies and media openly rejoiced over the operation. The level of happiness in Ukraine is such that, the country’s post office unveiled a commemorative stamp on the attack.

Adviser to the Head of the Office of President of Ukraine Volodymyr Zelensky tweeted, “Crimea, the bridge, the beginning. Everything illegal must be destroyed, everything stolen must be returned to Ukraine, everything occupied by Russia must be expelled.”

This is not the first time that Ukraine and the West have tried to spin the narrative and blame Russia for the “false flag operation.” A few days ago, West blamed Russia for causing leakage to its own Nord Stream pipelines, which it constructed for Europe.

Russia, on the other hand, has refrained from hitting infrastructure since the start of the conflict. But with the incident in Crimea, Russia completely revised its approach to the conflict. When Russia will attack the infrastructure, Ukraine will lose communications, energy, and operational rails. The transportation of soldiers, weapons, ammunition, and related supplies, as well as the functioning of production and maintenance facilities, will all be impacted by electricity problems. The whole course of the Ukraine war would change and the Ukrainian military will face the ramifications.

Zelensky has realised that the war is coming to an end. Therefore, he is trying to evade responsibility for the attack. He realises that he’ll be punished for the war crimes he has been committing. However, his clarification of the Crimea bridge bombings is too little too late.

France goes all out against Germany for siding with US