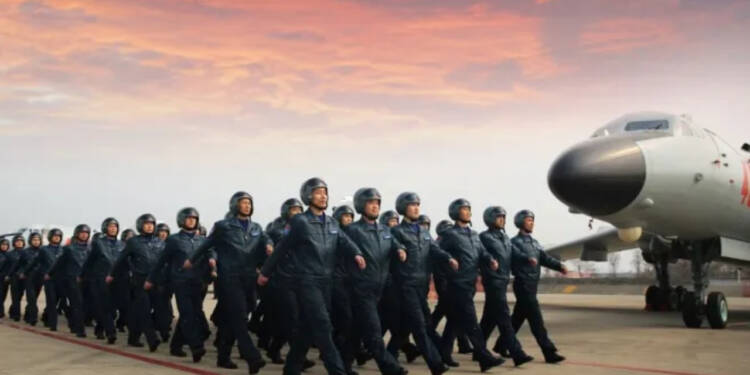 When it comes to safeguarding national interests, the Canadian Prime Minister scurries away. The ostrich PM seems to live in a parallel world and just knows how to put the country in trouble.

The country now seems to wake up to the Chinese challenge when the warning bells finally start ringing.

According to reports being investigated by the Department of National Defence, the Chinese government may be paying Canadian military fighter jet pilots to train Beijing’s air force.

Following several reports in the Canadian, British, and Australian media alleging that China may be offering former members of the Western air force hundreds of thousands of dollars to induce them into instructing Chinese military pilots, a spokesperson confirmed the development to Global News on Friday.

“We are aware of these reports, and we are looking into this further with federal partners,” the spokesperson said in a Friday statement.

Up to 30 former UK military pilots are “believed to have gone to train soldiers of China’s People’s Liberation Army,” the BBC said. According to the BBC report, the pilots were given “lucrative” packages worth up to CAD$350,000 in exchange for their labour. The Daily Mail reported that Canadians are also being approached for the job, despite the fact that Canada was not mentioned in the BBC piece.

If Canada accepts Beijing’s offer, though, they may experience serious repercussions.

“The Security of Information Act applies to both current and former members, and non-compliance with the Act could result in serious consequences,” said Department of National Defence spokesperson Daniel Le Bouthillier.

If found guilty of an indictable offence under the Act, the sentence could be up to 14 years in jail. If convicted of a crime punishable by a summary conviction, the offender may face up to a year in jail, a fine of up to $2,000, or even both.

The Canadian Armed Forces is an “institution that upholds democratic principles and the rule of law,” the spokesperson said, and they expect “current and former CAF members to adhere to the values of the institution.”

“Any behaviour that could potentially harm Canadian national interests is a violation of this trust, and will be dealt with appropriately,” he added.

In contrast, when questioned about the matter at a Tuesday hearing before the House of Commons national security committee, Lt.-Gen. Eric Kenny, the commander of the Royal Canadian Air Force, said he is “informed of” the reports.

“My focus is on the national security of Canada and Canadians. We take that extremely seriously,” Kenney said.

“We look at the threats every day to ensure that we’re ready to meet them today and in the future.”

In contrast, when questioned about the matter at a Tuesday hearing before the House of Commons national security committee, Lt.-Gen. Eric Kenny, the commander of the Royal Canadian Air Force, said he was “informed of” the reports.

For all these years with his progressive doings, Prime Minister Justin Trudeau has made a name for himself as the epitome of ignorance. China has expanded its roots in Canada, but Trudeau couldn’t care less. The caution of China’s expanding roots in Canada always fell on Trudeau’s deaf ears. Now, the country has emerged to be a national security threat in Trudeau’s land. And who is to be blamed for that? The one and only Justin Trudeau and his weak diplomatic stance.