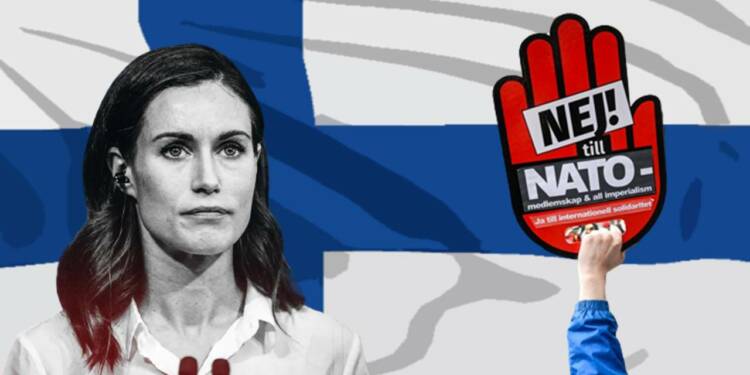 Finnish people have exposed the trust deficit NATO has in Europe after the Ukraine war. Finnish people do not want their country’s inclusion in NATO as it will only provoke Russia. They have declared NATO to be a real time loser in the Russia-Ukraine war.

Earlier this year in February, Ukraine was tempted with NATO membership. The move angered Russia, further annoying the president of Russia – Vladimir Putin. He asked NATO to clarify that Ukraine wouldn’t join the NATO otherwise it would face ramifications.

Putin’s call fell on deaf ears. Rather, NATO cajoled Ukraine with military help in case Russia attacks the European nation. US President Joe Biden then  declared , “We are ready to respond decisively to a Russian attack on Ukraine, which is still very much a possibility.”

Fast forward to now, it has been almost eight months of Ukraine war, Ukraine is ravaged, and Russia has annexed 20 percent of Ukraine’s territory, and NATO? Well, it is yet to respond “decisively.”

Amidst the war, USA is on full spree to capitalise it,  by offering Finland and Sweden NATO membership like it did to Ukraine. A similar cycle seems to be in motion. NATO chief Jens Stoltenberg has just promised Sweden and Finland of responding, if Russia or another enemy exerts pressure before becoming full members of the alliance.

A tragic comedy is in motion. NATO is tempting gullible nations in the name of membership and not coming to aid when they need it. NATO’s objectives are clear, to keep Russia embroiled in a war to harm it economically and financially. Well, the joke’s on them. Finnish people realise the game NATO is playing.

Only 15% of Finns support direct NATO military action against Russia, according to a poll conducted by Ilta-Sanomat.

Further, their anxiety is legitimate and their concerns have grown after their government has upped the ante to join NATO. Finnish and Russians share close cultural ties. History is filled with instances of the long-standing social, cultural, and economic ties between citizens of the Grand Duchy of Finland and other parts of the Russian Empire.

Therefore, NATO’s invitation to Finland and Sweden to join the alliance sparked an angry response from Russian officials, who labelled the move as “destabilising” and likely to escalate tensions in the area.

Also Read: Finland and Norway are getting stinking rich at the cost of every other European nation

Finnish people see through it. Finnish people realise that after the war ends in Ukraine, Moscow will turn towards Baltics and Finland because of growing NATO’s influence in the region. 36 percent of those polled admitted to being concerned about a potential Russian attack on Estonia, Latvia, and Lithuania. Additionally, 25% of respondents said that Finland may eventually be affected by the escalation.

Members of the populist and nationalist Finns party with a pro-Russian agenda overtly reject NATO-led direct action against Russia. The Greens and Left Alliance voters are apprehensive too about any such provocation by the NATO towards Russia.

The survey clearly has shown how NATO has lost trust in the Ukraine war. It first offered Ukraine membership and then never came to its rescue. Finnish people have understood NATO’s nefarious motives and are neurotic about any membership being offered to Finland.

The overwhelming support by Finnish people is a message to Finland’s government. Finland’s government may have made a hasty decision of being influenced by the White House in joining NATO. It still has time to backtrack on its position and not being cowed into submission by the Biden administration.