The energy crisis had already crippled the Canadian economy, and now the food crisis may well turn out to be the last straw for people’s patience 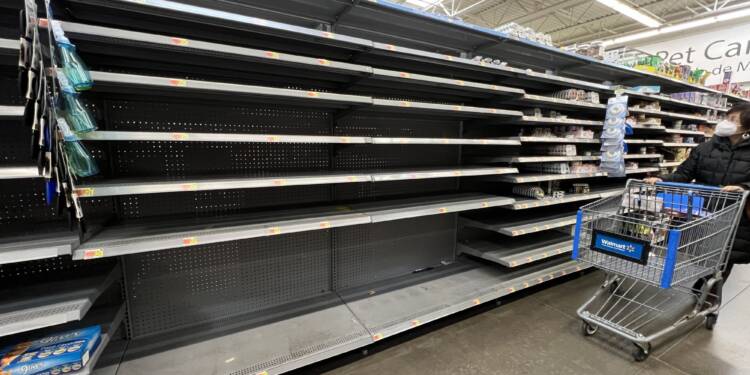 The food crisis in Trudeau’s Canada was long in-the-making, thanks to Ottawa’s policies that only helped exacerbate the situation. For instance, not a long ago, Trudeau’s geniuses were suggesting the public to feel safe in consuming expired food products, in the name of curtailing food wastage.

However, when poor, food-deprived Canadians resorted to rushing to the food banks of Canada to access cheap food, their fate deceived them yet again. Now even the food banks are going bankrupt and running out of food supplies.

Researchers determined that Canadians visited food banks 1.5 million times in March, a 15% increase from 2021, after examining more than 4,750 food banks across the nation.

According to John Bayliss, board chair, and CEO of Food Banks Canada Kirstin Beardsley, the scenario is unusual.

“There has likely never been a more difficult time for food banks in Canada. Across the country, more people are turning to food banks of Canada than ever before in our history. Many people are visiting for the first time, making the difficult choice to ask for help because their money simply isn’t stretching far enough to cover their expenses.” wrote Beardsley and Bayliss in the introduction to the report.

But, the crisis is so deep that even food banks of Canada are not able to meet the demands. Calgary’s Mustard Seed food bank raised worries last month that it wouldn’t be able to provide services effectively going forward owing to the consequences of inflation and a shrinking donor base. As you can see, Canada’s food problem is getting serious and may soon go out of hand. The biggest question here is, who is to be blamed for all this mess?

Tim Uppal, the deputy leader of the Conservative Party, criticised Justin Trudeau in the House of Commons over the issue.

“The Liberals are completely out of touch with the economic crisis that Canadians are facing because of their reckless spending,” said Uppal.

“Interest rates went up again today. The cost of groceries is at a 40-year high, forcing too many Canadian families to use a food bank. It is becoming a luxury to heat a home in this country. On top of that, the Liberals will be raising the carbon tax, making everything more expensive.”

“If we were to compare to, let’s say 2019, which was a normal year, the donations are down. But on top of that . . . some of our regular meal sponsorships are also down, and meal sponsorship is directly tied to volunteers,” said street director Andrew Gusztak.

“Many of our sponsor groups without even showing up, kept giving. But there are a number of companies, organizations, groups, partners of ours and churches that have stopped sponsoring and stopped coming.”

We know, a terrible tragedy is unfolding in Canada, which can push nearly 5.8 million people into a grave food crisis.

Due to financial restrictions, they do not have access to affordable food, and over the past 15 years, their number has drastically risen. With the introduction of government-backed pandemic-relief programs, the number decreased marginally at the beginning of the COVID-19 outbreak but is now once again rising, according to Statistics Canada.

Approximately 16% of Canadians are living in food insecure households, according to Valerie Tarasuk, a professor of nutritional sciences and the head of a research team at the University of Toronto looking at food security.

All this can have serious repercussions for the country’s social stability in the forthcoming times. You see, food banks of Canada are dealing with incredible volatility, from changes in the availability of food donations, to faltering access to methods of transporting food where it’s needed. Food banks were the last hope for thousands of poor Canadians who see no other option to make both ends meet. Now, it can have disastrous consequences for civilian order in the country. With no savings and no food, people in Canada may soon be forced to take to the streets to vent their anger out and teach Trudeau a lesson of his life.