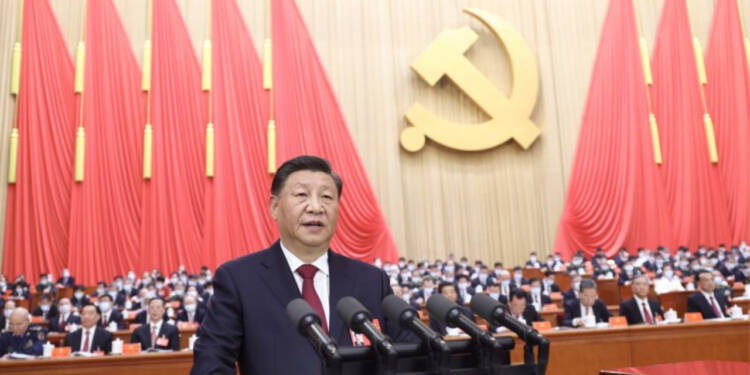 Sun Tzu – arguably the most celebrated war-time counsellor in the world has been the guiding light for Chinese rulers and later the Chinese Communist Party. In his magnum opus, “The Art of War”, Sun mentions “appear weak when you’re strong and appear strong when you’re weak”.

Here is an example:

A person or tribe hits when he thinks victory over the other person or tribe is certain but is quickly overpowered by a strong resistance and as his army kneels, the unsuspecting chieftain knows that he has been fooled by an apparent show of weakness.

Conversely, a person or a tribe doesn’t think about crossing paths with another tribe that seems well prepared, strong and resolute. A mere show of strength is enough to instil terror in the hearts of foes.

It seems Xi Jinping has executed the second method by ordering the public eviction of Hu Jintao.

Almost a week back, Hu Jintao was humiliated on a grandeur scale by Xi Jinping. The next day, Xi declared his third term and his top team of loyalists. The timing of the event and the obscurity of Chinese politics triggered a global guessing game as to what had happened.

But, Xi Jinping has stepped on a political landmine by publicly mortifying the head of the Chinese Communist Youth League (CCYL).

The Shanghai Gang, led by Jiang Zemin, and the Chinese Communist Youth League (CCYL), headed by Hu Jintao, had previously dominated Chinese politics in the post-Deng Xiaoping era. The two groups established a power-sharing mechanism over time. They were given seats at the Politburo and the Politburo Standing Committee, the two most important decision-making bodies in the nation. The positions of general secretary of the party and president of China were held by the two factions alternately. The Shanghai Gang and CCYL clashed for power, but they also worked together on several issues and subjects. The CCP’s factional rivalry served as the most concrete representation of Deng Xiaoping’s vision for collective leadership.

This all changed after Xi was elected to power in 2012.

Hu could have been simply prohibited from joining the conference. He could have been put under house arrest but Xi thought of playing the classic Sun Tzu – appear strong when you’re weak. Xi has a target on his back, he is hated by his citizens, reviled by Chinese businessmen and loathed by his party members. He is the bête noire of almost every neighbouring nation of China and provinces like Xinjiang and Tibet are baying for his blood. Xi is weakened. His grip is not strong enough so he needed a power move to salvage his credentials.

The humiliation of Hu Jintao

Hu Jintao was escorted off the stage from a significant communist party conference in Beijing last week. At the 20th Congress of the Chinese Communist Party (CCP), Hu’s seeming reluctance to leave the podium was a rare instance of unscripted drama amid an otherwise well-staged week of political theatre.

The recent videos reveal that before being escorted off, Hu Jintao was fighting about official papers. It shows Hu engaging in a minute or so of covert, high-level maneuvering before an officer arrives to take Hu away. Hu, who is 79 years old, gave up his position as party leader ten years ago, but the surprise event sparked a lot of discussions, with some claiming that Mr. Xi used it as a power move to demonstrate that the more consensus-driven Hu era has ended.

This factional power-sharing mechanism led to the selection of Xi Jinping as party secretary in 2012. Hu, the CCYL leader, had been replaced by Xi, a member of the Shanghai Gang. But when Xi strengthened his position of authority during his first term, he started to forge his own new group, named the Xi Gang.

Along with a number of other actions that have further undermined the concept of collective leadership, Xi has attempted to consolidate total control over Chinese elite politics through his hand-picked appointments. The steps he took included changing the CCP’s methods for enlisting new members, revising the party’s official guidelines for collective leadership and formalising small-group leadership to strengthen party’s position in decision-making.

His days are numbered

Hu Jintao’s insult demonstrates how uneasy Xi Jinping was with the leader and the Chinese Communist Youth League (CCYL). It was not only Hu Jintao who was side-lined from the event. Several major leaders like Li Keqiang, the premier, and Vice Premier Wang Yang, both 67, and young enough to be reappointed to the elite seven-member Politburo Standing Committee, were left out of the wider Central Committee as Xi installed loyalists in key party positions during the recent twice-a-decade leadership reshuffle.

Enlisting and developing some of China’s brightest high school and university students, the Youth League historically served as a feeder organisation for the party. But, according to government data, the Youth League’s budget has decreased from nearly 700 million yuan ($96 million) in 2012, the year Xi came into office, to roughly 260 million yuan in 2021. Over the same time span, its membership fell from about 90 million to about 74 million. To put things in perspective, the Communist Party of China has 97 million members.

Clearly, Xi has crushed the Youth League for the time being. But, he has infuriated a large section of the Chinese society and a section which has enjoyed power for long. The move will have serious ramifications for the Chinese leader. It is a well-known fact that one can’t deprive a large section of society of decision-making powers and continue to rule in peace forever. Don’t be surprised if Xi Jinping becomes the first Chinese leader to be assassinated in history.