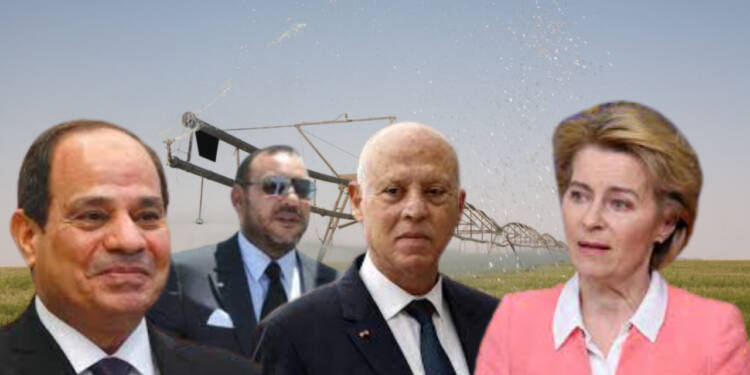 Food is essential to sustain life on earth. A continuous food supply is necessary for survival, but this supply has been thwarted by ill-thought sanctions by the European countries. However, these misguided sanctions are now having the opposite effect, and Europe is now dependent on the North African countries to solve its food shortages.

The ill-thought sanctions by the European Nations on Russia have landed Europe in a supply chain crisis and that too a food crisis. Europe which is a predominantly colder region as compared to the rest of the world has now started seeing the repercussions of not diversifying its supply chains. An established and diversified supply chain is any day better than a fast single-source streamlined supply chain.

The ill-planning of the European Union has landed it in crisis which has now compelled it to literally snatch the supplies of the North African nations. After taking over the grain and oil supplies of Tunisia, the European countries are now after the vegetable and other essentials of the southern Mediterranean region.

Due to the financial hit from Europe’s energy crisis, vegetable farmers in northern and western Europe are thinking about suspending their operations, further endangering food supplies.

Some view the solution as shifting their operations to North Africa or importing food from countries in the region. However, for a number of economic and ecological reasons, Maghreb specialists are doubtful that Europeans might find what they require in North Africa.

In Europe, rising gas and electricity costs will have an impact on crops that need to be stored in cold storage, like apples, onions, and endives, as well as those cultivated all winter in heated greenhouses, such as tomatoes, peppers, and cucumbers.

Endives have a high energy requirement. The bulbs are picked in the fall, stored in below-freezing temperatures, and then replanted in temperature-controlled vessels, in order to harvest year-round production.

Read more: The latest EU-Africa energy summit turns out to be a major embarrassment for West as no African country shows up

Farmers across Europe have issued a shortage alert. Given the projected impact on production and increase in pricing, stores might start importing more products from warmer nations like Morocco, Tunisia, and Egypt having Turkey as another option.

Though North African countries produce more than they can consume, it isn’t the case in places like Tunisia where food shortages are very apparent and the supply of the market is interrupted.

However, it is still a possibility that the Maghreb nations could be lured by the Euros which will be gained through food exports. Nevertheless, this can further pressure domestic consumers and create panic situations.

With energy contracts renewal being quoted ten times the last contract, farmers are opting to keep their production bases empty this year. The energy crisis has not only depleted the resources of farmers but has also led to the skyrocketing prices of fertilizers, packaging and most important of them all—transportation. The war situation and the self-sanctioning of the European countries have jeopardised the margins of local farmers and small businessmen. The people with a large sum of capital and debt can sustain without profits for a year or two but small farmers and businessmen are revolting against the policies of the Western governments.

Farmers have started protesting against the European Union’s new “Common Agriculture Policy” (CAP). The CAP has now put a cap on the income of the farmers. They are now protesting in front of the EU Parliament in Strasbourg, eastern France and also in other cities like Paris carrying banners such as, “Europe wants to kill those who feed it”.

And not only this, but the gripping energy crisis has also forced thousands of Europeans to spend their winter months in warmer nations such as Morocco and Tunisia. It is ironic as it is the same Europe which barred African refugees. And now the European ‘climatic’ refugees are resorting to migrating to the African continent. This has changed the perspective of the traditional ‘warm welcome’ of the Maghrebi countries.

Now if we return to the food crisis under which the European continent is grappling, it has also changed the meaning of the food aid which Europe used to give to the African nations as the war in Ukraine began. Now it is Africa which is helping Europe whether it is food, oil, energy or any other essential supply.

This phenomenon has given the edge to the African nations as they are now in control of the food supply chain of the major Western nations. They are in a dominant position when it comes to dealing with the European nations as now they can dictate the terms of the deals and contracts.

The African nations have now started to realize the selfishness of the Western countries, especially Europe. The North-African nations will now prioritize domestic food supplies instead of supplying everything to Europe.

Read more: “We don’t care what the West has against him”, South Africa hosts Russian Oligarch and Putin’s best friend

In future, if the European countries try to act smart, the African nations can together disrupt the food supply chains immediately, halting the whole of Europe, which Russia is doing now with oil and gas.

Times and fortune change and it is evident from the current situation of the European and African continents. Africa once thought to be a conglomeration of impoverished countries, today provides food for the “richest continent” in the world.