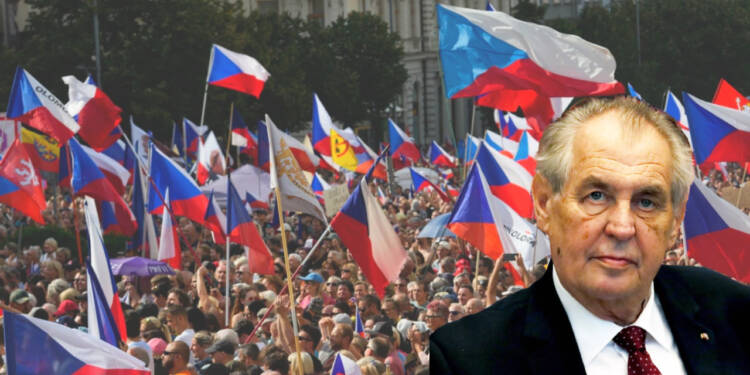 Nationalist sentiments have fuelled awareness and dissent among citizens in Eastern Europe where protests are being held in favour of ending the war sooner and NATO to work negotiating with the Kremlin. The energy price rise has frustrated citizens, persuading them to take to the streets and cry out anti-NATO slogans. Such an event was witnessed in the Czech capital of Prague with locals protesting against their government and forcing their heads to resign.

The Russia-Ukraine war has led to a cost-of-living crisis in Europe. People took to the streets and demonstrated in Prague on Saturday. Seventy thousand people gathered in the Czech capital to protest against the rising energy prices. Protestors were also angry with the European Union and NATO.

A Voice of Annoyance in Prague

The beautiful Czech capital is currently being seen as a city aspiring change. Citizens are coining Donald Trump’s language ‘Czech First ‘ to prioritize economic redevelopment, normalization of relations with the Kremlin and price stabilisation where this country’s inflation went up to 18 percent in September.

Protests are being held in demand for the resignation of PM Petre Fiala plus the former group is pro-Kremlin where they have raised slogans in support of the resignation of the incumbent government which has been staunchly supporting the EU, and NATO initiatives in sympathy with Kyiv.

Further, the refugee issue has also created concerns in the mind of the protestors. The current government has provided 4,50,000 visas and provision of access to financial assistance, work permits as well as to Ukrainian citizens who fled amidst turmoil where even this forthcoming posture from Prague has accentuated anger and difference of opinions. Populism, in this case, has created some confusion among voters and minority groups through mass mobilisation.

Many protestors are also raising their voices on behalf of their Russian brothers who have been silenced by Putin administration. The Czech Republic is home to 3,00,000 Ukrainians and 45,000 Russians. According to an Arab news report, Russians residing in Prague feel upset about the recent developments in Kyiv and they are against the war. This instance shows that there are voices outside from people belonging to a similar nationality raising concerns and frustrations which is impossible in their own native country.

“Russia’s not our enemy, the government of warmongers is the enemy,” one speaker said.

The protest indicates that the Czech citizens are concerned about the economic woes and are questioning NATO and the EU. The protestor’s demands include contracts for direct gas supply, denial of Ukrainian refugees’ permanent settlement, and military neutrality. The protestors also support Russia over Ukraine. The energy crisis can create a political crisis in Europe’s vulnerable economies.

So, we can say that these massive protests will force the anti-Russia government to resign and its days of governing the pro-Russia citezens are numbered.

Canada can no longer produce defence equipment without China’s approval