Belgium Foreign Minister Hadja Lahbib had stated in an interview earlier in October that the relationship with Beijing is complex and the latter is a potential rival, partner as well as a foe 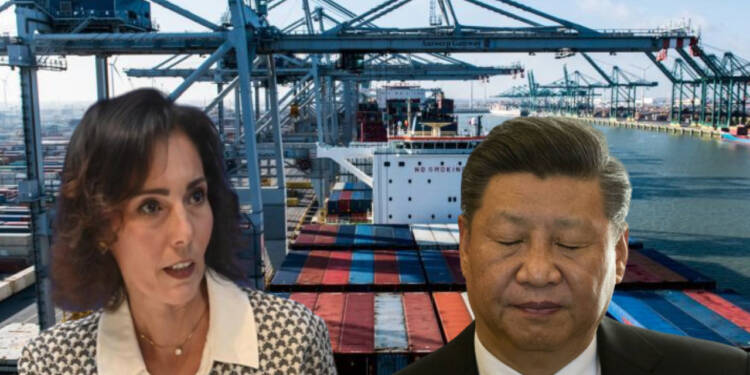 Last week, Brussels cancelled a port deal with China in view of strategic threats that could emerge through Chinese ships coming for surveillance purposes and getting crucial security information to be misused. See, in spite of differences and wariness, trade between China-EU ushered at about 413 billion euros. But in recent times, Europe has been sceptical about Chinese control over their ports, investments and infrastructure.

In EU, many countries that once gave China a place at their ports for commercial activities are now trying to slip away because of China’s interference and data misuse. It is no secret that many in the EU view China as an encroacher and a threat.

Belgium Foreign Minister Hadja Lahbib had stated in an interview earlier in October that the relationship with Beijing is complex and the latter is a potential rival, partner as well as a foe. Chinese trade ships could be viewed as warships in case if they make their entry for business and show that there is normalcy but this isn’t the case.

Lahbib felt that the ports of Antwerp and Zeebrugge are going to be the launching pads for China’s expansionism in Europe. Zeebrugge has been under the Cosco group, which became a major shareholder in 2017 in this container port terminal.

Though, she later had to take back her statements due to pressure applied by a Chinese official.

This, however, is not the only instance of Beijing knocking on Brussels’ door. Going back to 2021, 100 million euros were being used by Alibaba at Liege Airport to monitor activities and surveillance.

Even recently, the Cosco firm has agreed to spread its wings in Hamburg Port by acquiring ownership under a sale initiated by the German government where a 25 per cent ownership stake was given to the Cosco group. The Chinese firm even has a stake in the ports of Rotterdam, Valencia and Bilbao, where container ports are present. These examples are just a few but as far as Beijing’s port control ambitions are concerned, they are never-ending – they want control here, there and everywhere.

So now, several EU countries are willing to change their minds when it comes to doing business with China. Brussels cancelled a port deal through its recent tussle with China became the first one in line. Belgium is definitely intending to push China back amidst concerns also being raised by illegal Chinese police stations in Germany and Netherlands. For context, these police stations are meant to ensure control over the movement of Chinese citizens who are going to be punished for spreading true information about the autocratic state and its intentions.

Well, Beijing aspires to control the logistics network globally. It has started creating hubs for its supply chains. Chinese companies might take on shipping giants such as FedEx and UPS.  2000 e-firms have come up in China with Caino and JD logistics playing a leading role in this sector. Quartz stated about 14 per cent of China’s GDP is used in logistics and state enterprises are allocating 30 million yuan to further logistics initiatives.

Read More: Brussels descends into total chaos, and Belgium stands at the cusp of a civil war

Looking at the questions being raised about China’s disguise of innocence, many in the strategic community are suggesting Brussels (port deal cancel) look for other alternatives. Xi Jinping, who has recently started his third term as the party leader, is seemingly becoming more nationalist and assertive. He may try his best to achieve the ‘Dream‘ he has repeatedly mentioned in his speeches. He is walking towards his dream by persuading countries which are in uncertain conditions or economic turmoil -which is in recent days true for the EU as it is facing huge crises due to the Ukraine war.

But it looks like that through Belgium’s stern stand, the EU is sending a message to China that Xi shouldn’t think that the globe will look up to its exactions or demands. On the other hand, the EU has completely planned to shun his ambitions of turning Belgium into a logistic hub of China’s supply chain infrastructure for the whole Western region.

The Growth of the Online Casino Industry in Asia