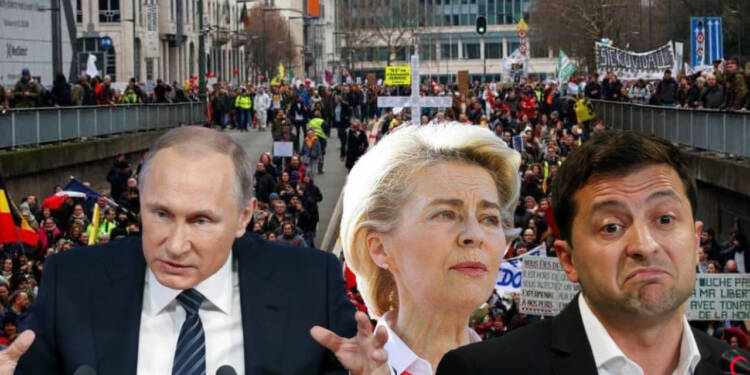 The Russian-Ukraine war has devastated everything the European Union was ever proud of. The grouping, owing to the presence of dynamic and diverse economies, has long maintained a strong presence among major global economies.

Now, the strength of the union seems to be a thing of the past. The possibility of rebellion is strong amid the chaos and the dethroning of the bullies is inevitable and if it were not enough, angry swarms of citizens fed up with extraordinary price hikes are now ready to take down the headquarters of the union.

Rising food prices, startling energy bills, and frustration with politicians and employers brought 10,000 people to the streets of Brussels on Wednesday.

The protestors were seen conversing with the media, where they mentioned that they want local, national and European politicians to react now and take immediate measures to help them with the financial burden of the crisis.

The whole of the continent of Europe has become the collateral damage in a larger war between the US and Russia. American President Joe Biden has used Ukraine as a proxy in his war against Moscow by insisting on a continuous weapon supply to Ukraine and by rallying its allies to enforce substantial sanctions against Moscow.

Moscow soon owing to a plethora of sanctions and continuous aid against it from Europe diminished gas supplies to the continent and later completely suspended a majority of supplies until the sanctions were lifted.

You see, the Russians might not have the most sophisticated technology and breakthrough research but the country is blessed with a plethora of resources, which enables it to control the strings of the manufacturing capacity of the continent of Europe.

As a result, the Kremlin, despite being under the stress of multiple sanctions, is doing better than any wartime economy ever could have, while their aggressors in the east struggle as their economic bubbles start bursting at their own whims.

Economic sanctions imposed by the west on Russia coupled with Biden’s reckless weaponization of the USD to curtail Russia’s foreign reserves have in actuality benefited Russia in many areas and has negatively impacted the innocent European populace.

It has now come to a point where one might wonder if the west imposed sanctions on Russia or on itself. Conditions have grown so bad that European nations are planning to ration gas with winters approaching while the Russians have a huge surplus.

The biggest issue is that the European leaders don’t seem to have a way out of the crisis. Liz Truss, the new British PM came up with a subsidy scheme to cushion the populace from the impact of increasing gas prices. However, the populace would be the one that would have to pay for the amount in form of increased taxes and will also lose money owing to a depleting value of Pound.

The condition in Germany is not good either, the country is going towards deindustrialization owing to quashed gas supplies. Also, the administration is all set to levy additional charges on the consumer to cover losses.

Things are getting worse and worse in the majority nations of the continent with a situation of civil unrest spreading in many states. Moreover, a general strike is planned for the 8th of November in Belgium and it looks like it would mark the beginning of the end of the EU.