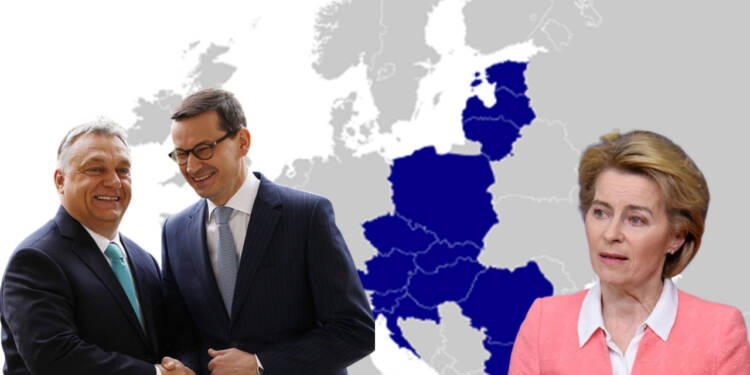 The European Union (EU) was created as a result of post-war cooperation in Europe to ensure peace, prosperity, and stability on the continent.

Although the organization was created to provide a level playing field for all member countries, it wasn’t long before nations like France, Germany, the UK, and Italy established their predominance in the EU order after the horrors of World War II had faded.

Well, the Russian-Ukraine war has altered the dynamics for good and rebel member states are rising against the unfair hegemony of stronger states, which would probably be the end of the EU.

The EU was indeed a strong grouping for a very long time. But to tell you the truth, the war in Ukraine has changed everything. The closely knit community of nations that pledge solidarity is not so close anymore. Multiple nations are on the brink of rebellion, and rightfully so.

Poland, although it did initially support the EU in its efforts against Russia, the EU’s unfair behaviour soon sidelined Poland from the effort.

As a consequence of its hefty support to Ukraine, Warsaw is now in the grip of a record high inflation swirling at the highest rates in a quarter of a century. Understandably, Poland’s leaders are slowly coming to a consensus with the realities of the world and are starting to take an anti-EU stance.

Poland has been increasingly distant from NATO under the latter’s discriminatory policies against it. Finding fault with Poland’s judicial reforms, the EU delayed the approval of 23 billion euros ($26bn) in EU grants and 34 billion euros ($39bn) in cheap loans that were spared to help the country recover from Covid-19’s economic impacts.

Warsaw’s breaking point came when Germany broke its promise to deliver modern Leopard tanks to Warsaw in exchange for Polish tanks sent to Ukraine. Berlin’s ignorance in the matters of securing Warsaw’s security irked the Polish leaders who are now reportedly making efforts to revive its “Three Seas Initiative”

As a means of reviving its interwar “Intermarium” geopolitical project in contemporary circumstances, Poland has been promoting its Three Seas Initiative. This platform aims to increase Polish influence by incorporating Central & Eastern Europe (CEE), including the former Soviet Republics of Belarus and Ukraine, into Poland’s direct influence.

Together, the proposed grouping would include 12 states lying inside of a triangular formation between three seas- Adriatic Sea, Black Sea, and Baltic Sea.

Berlin is under a lot of pressure owing to an ongoing energy crisis and is going towards rapid de-industrialization and this would be the perfect time to quash Germany’s hegemony in the EU.

The Polish Prime Minister, Morawiecki, is hitting Germany hard whenever it can and recently branded Germany as an unreliable ally after the latter refused Ukraine a bunch of battle tanks.

Germany’s attempt to make things right with Russia by distancing itself from the war reportedly has troubled Biden, who would not allow any European ally to pull back its support, and that is exactly why Washington recently pledged more than $2 billion in additional long-term military assistance for Ukraine and 18 of its neighbours. Well , coincidentally or not so coincidentally, Biden directly funded some of the nations that are a part of Poland’s Three Seas Initiative.

Washington has indirectly threatened Berlin to stay in the game or else it would endorse Warsaw as the sole EU leader.

Another European state has been a pain for the EU members. Hungary has refused to cooperate with the union ever since the beginning of the war. Budapest did not only abstain from criticizing Russia in line with the EU’s unofficial mandate but also continued importing significant amounts of energy, citing that it would not pay the price of war.

Blocking Russian energy exports would force Hungarians to “pay the price of the war,” Prime Minister of Hungary Viktor Orban said, noting that 85% of Hungary’s gas and more than 60% of its oil come from Russia.

Orban even went on to make a very strong statement that announced his view that predicts the EU’s ultimate collapse by 2030.

You see, two regional powers are locking horns with the EU leadership, which in turn is supported by the very orchestrator of the tragedy- the US. This indeed marks the beginning of the end for the EU.