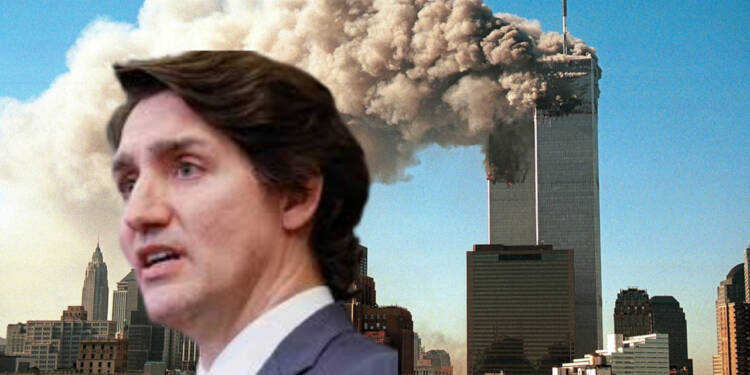 9/11- a date from the past which will remain etched in our memories forever. The evening was like any other typical evening with commotion on the streets of Manhattan. Some might be sipping a cup of coffee in a coffee parlour next door while others might be enjoying a fun evening at a theatre only until the ‘city that never sleeps’ met with a deadly terror attack.

We are talking about the 9/11 suicide attacks in the New York City of the US that were perpetrated by an Islamist extremist terrorist network Al-Qaida. But, the US government if not wholly then partially was to be blamed for the horrific turn of events. The US invited an Islamist outfit to perpetrate terror in the country and Canada is probably making the same mistake.

We know how the Canadian government likes to go soft on criminals. It’s an established fact that the Parole Board of Canada is flawed and allows murderers and serious criminals to roam like a free spirits. As if the murderers involved in the recent stabbings out on parole weren’t enough to irk the nerves of the people, the Board has granted parole to an Al-Qaida inspired terrorist.

Zakaria Amara, the mastermind of an al-Qaida-inspired terrorist plot to detonate truck bombs in Ontario in 2006 is on parole now. He recently underwent two days of questioning by RCMP national security detectives in order to determine what threat he could still pose.

A fiery leader of a team of 17 who intended to plot a terror attack in Toronto pleaded in front of the board to go back to society and the ignorant, lenient Parole Board of Canada couldn’t deny it.

After the board’s second meeting, the two-member parole panel decided against granting him release and demanded to first observe his behaviour while on temporary leave from prison. The hearing was suspended while the panel gave it some thought after Amara’s attorney, Nancy Charbonneau, interjected that the 60-day temporary leave programme was no longer accessible.

Doug Kirkpatrick, the panel’s chairman, announced that the board would split the difference and give him three months in a halfway house to complete a post-release programme and demonstrate his worth instead of the customary six months of parole.

Did the board assess his progress before his release? Did the board take some empirically meaningful measures to assess the progress of a jihadist terrorist? It is well-known fact, inmates who are incarcerated for terrorism yet are religiously radicalised have proven to be a challenge for Canada’s correctional system.

As a result, inmates are left in an institutional limbo without any programmes to manage their special risks and motivation while incarcerated and without any resources to gauge their progress when requesting release.

Like an insurance company, the parole board typically finds comfort in actuarial calculations that account for criminals’ statistical agglomerations. For jihadist terrorists, there are too few in Canada to make such empirically meaningful measures. A jihadi out on parole without a proper assessment is sure to send shivers down the Canadians’ spines.

“I just hope to go back to society. I want to be a contributing member,” Amara said. “I don’t want to be ashamed for the rest of my life. I don’t want my family to be ashamed for the rest of their lives. And the Muslim community,” he said from Warkworth Institution, a medium-security prison in Ontario, where he is serving a life sentence for participating in a terrorist group and intending to cause an explosion for the benefit of a terrorist group.

The board members must now be hoping that they won’t be going to bed anxious about him and must be hoping not to see him again but who knows they might be seeing a ‘horde of Zakaria Amaras’ inside the detention centre.

Amara was of the idea to get scrutinised for his radicalisation and then subsequent deradicalisation while in prison for 17 years. He hoped this would fill a gap for the Parole Board of Canada in deciding if he was ready to be released. But, why would a fiery terrorist want to go behind the bars voluntarily? Did he hold some ulterior motives that the board is too naive to comprehend? Why did he demand a span of 17 whole years? Who knows he was on a mission of activating sleeper cells in the detention centre which he probably succeeded in doing.

The board freed a radical, a jihadi, a terrorist, and an al-Qaida supporter. How can the board be so ignorant of its own country’s national security? Canada is committing the same mistake as the United States.

The US always kept a soft stance toward the Jihadists and several instances prove the country funnelled funds to some of the Islamist terror outfits. Perhaps the USA could never think that Islamic terrorism is a serious problem or that it can ever occur there! And that’s why during the months of the Soviet invasion of Afghanistan U.S. President Jimmy Carter’s focus initiated a covert program through the CIA to financially support the Afghan rebels, the mujahideen, in July 1979. US intelligence agency CIA later expanded the program, code-named Operation Cyclone, and began providing weapons along with money to the mujahideen through the Pakistani intelligence services. The US gave Islamists an invitation to expand their roots and later gave the country a taste of their ‘jihadi medicine’.

The US can never get over the aftershock of the attack of 9/11 and Canada should learn from the past instead of giving birth to a Canadian 9/11.