Through its actions, China has proven time and again that it won’t think twice before abandoning its so-called partners. That's what DRC seems to have realized now! 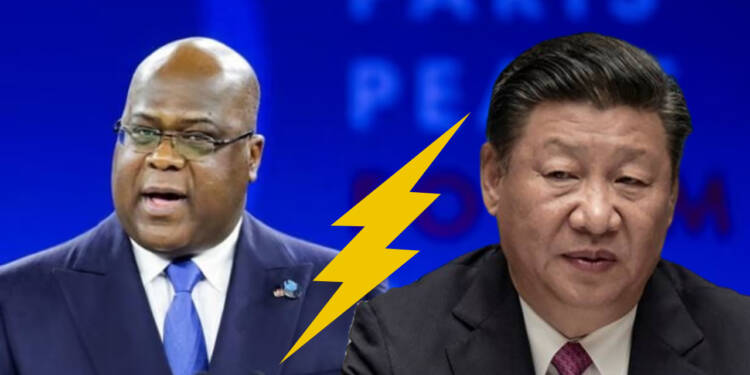 The president of Democratic Republic of the Congo, Felix Tshisekedi, has replaced top leadership in the country’s military. Christian Tshiwewe, who was the head of the presidential guard, has been appointed as the chief of general staff of the Armed Forces of the Democratic Republic of Congo (FARDC) by replacing General Célestin Mbala and Christian Ndaywel as the new military intelligence chief replacing General Delphin Kahimbi. Mbala and Kahimbi were appointed by former DRC president Joseph Kabila and were loyal to him.

As per some analysts, the army of DRC is highly politicized. In fact, during an interview, current president Tshisekedi stated that several organs in the military “still obey their former leaders”. Now, who is Joseph Kabila? He is the former president of DRC, who served from 2001 to 2018. His father, Laurent-Desire Kabila, was the president of DRC in the 1990s and was also the founder of a rebel group called Alliance of Democratic Forces for the Liberation of Congo-Zaire. AFDL was formed to oust the then president Mobuto Sese Seko’s regime. Joseph Kabila was appointed as the commander of a unit of AFDL.

After the assassination of his father in the backdrop of civilian unrest and political turmoil, Kabila was appointed as the president of DRC. Kabila is infamous for his unethical, undemocratic and oppressive actions in DRC. In 2011, he was accused of rigging the elections in which current president Felix Tshisekedi’s father, Etienne Tshisekedi, was his primary opponent. Many people disputed the results of the 2011 elections and stressed that had the results of polling stations not been suppressed, Tshisekedi would have won.

In 2015, Kabila’s regime passed a law which required a census before the next general elections. In the same year, there was a brutal crackdown on a protest against this decision which claimed dozens of lives. In 2016, his sister Jaynet Kabila was named in the Panama Papers.

Read More: US activates its Boko Haram module after Nigeria shames it for stealing its oil

When it comes to international affairs, DRC had good relations with China under Kabila. Kabila went for his military training at the People’s Liberation Army National Defense University, which is the highest academy of China’s military.

In fact, there was a report by the Sentry which uncovered how DRC under Kabila conspired with Chinese-state owned firms to embezzle funds. China and DRC signed a deal to fund the latter’s infrastructure projects in exchange for control of its mineral resources. However, the money which was meant for the development of DRC was appropriated by Joseph Kabila’s associates with the help of David Du Wei, a middleman who had high level connections in China and DRC.

For someone who is willing to give his nations’ control of mineral wealth to one of the most untrustworthy nations, Kabila’s closeness with China is clearly visible.

We at TFI explained about China’s involvement in DRC and how it has established its hold over DRC’s resources, subjecting its locals to brutality and damaging the economy.

China is a dangerous nation that has absolutely no regard for the sovereignty, security and stability of other countries. Through its actions, China has proven time and again that it won’t think twice before abandoning its so-called partners. It is involved in illegal mining, smuggling and practices debt-trap diplomacy.

China’s presence in DRC, which is already battling with a political, humanitarian and economic crisis due to M23 rebels, would further complicate the conflict. But that will not happen.

Read more: Uganda’s self-proclaimed prince is high on power and only a long jail term will fix him.

Why? Because the military leadership under Mbala and Khaimbi who were loyal to Kabila who in turn was loyal to China have been removed from their official positions, which means that there can be no coup-attempt on the instructions of China. China would have definitely used Kabila’s loyalists to overthrow Tshisekedi’s regime and install a puppet government that will promote China’s interests in DRC. And Tshisekedi knows this, therefore has decided to replace the military leadership of DRC with a loyal one that won’t interfere in the matters of the democratic government and is confident that it won’t attempt any coup.

Through this decision, Tshisekedi prevented any attempt by China to create any kind of political upheaval in his country.