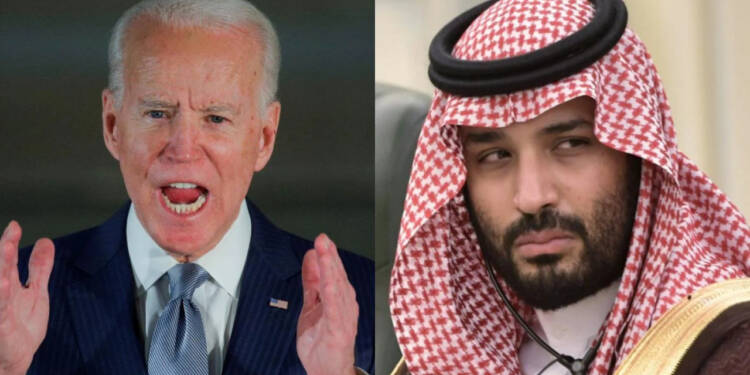 Iran attack Saudi Arabia: Biden is doing everything he can to ignite a war in the middle-east. He has realised that only wars give the United States the opportunity to redraw the equations of geopolitics. But, MBS isn’t demented like Zelensky. He has seen through Biden’s vicious plan.

There’s been a lot of drama going on between Saudi Arabia and United States in the last few weeks. From being the best of allies to falling out in the last month, it has been a mess. The recent development is about how Biden’s trying to come back into the scene.

Three U.S. officials have claimed that Saudi Arabia has provided intelligence to them that indicates Iran may be gearing up for an imminent strike on the kingdom. The Pentagon press secretary, Brig. Gen. Pat Ryder, responded that American military officials “are concerned about the threat situation in the region” when asked about reports of the intelligence supplied by the Saudis.

The report claimed that Iran is prepared to launch assaults on both the kingdom and Erbil, Iraq, in an effort to divert attention away from the country’s ongoing domestic unrest that has erupted since September. Without going into further detail, State Department spokesman Ned Price stated that America was “concerned about the threat picture.” However, democratic representatives last month presented a legislation that called for the withdrawal of vital US military equipment stationed in Saudi Arabia and the United Arab Emirates (UAE). A stance totally in contrast to what the US is doing as of today.

Read our Premium piece: Saudi Arabia can crash US Dollar the day it wants to

However, despite such a big claim, nothing of the sort has been confirmed by Saudi Arabia. Neither has Iran’s representative to the UN affirmed the reports. It’s surprising that no statement has been issued by the Saudi Arabin government on the proposed claim. The whole report increasingly seems like an effort by the US to reignite the tensions between Iran and Saudi Arabia. And if that happens, USA will be back In the scene in Saudi Arabia. But why is it all significant for the US? Because USA’s power and leverage in the nation comes from the security it provides to Riyadh.

That’s what the United States is trying to act on it. The harm done to the relations between the two countries by the Biden administration since taking office is enormous. The Jamal Khashoggi episode became a major bone of contention between the two. Riyadh was also displeased by the Biden administration’s decision to stop supporting Saudi Arabia’s military campaign in Yemen. Saudi Arabia concerns with the US have grown as a result of Houthi attack on Saudi oil infrastructure and Biden’s efforts to resurrect the nuclear agreement with Iran.

Another major incident, which strained ties between the United States and Saudi Arabia was seen just a few days ago. The alliance of oil-producing countries led by Riyadh, known as OPEC+, declared in October that it will reduce output by 2 million barrels per day beginning in November. In response to the action, the White House has stated that it is examining its ties with the Saudis. According to the administration, Russia, another member of OPEC+, is effectively benefiting from the output cut as it carries on with its now 9 months-old war in Ukraine.

Clearly, by denying the recent reports of Saudi Arabia being under attack by Iran, MBS has destroyed Biden’s plan to spiral back into the scene in Riyadh. MBS doesn’t want Biden to be given any opportunity to influence any decision of the OPEC+. He has already started to form new allies with Russia and China, to begin with. So, Biden is acting desperately to boomerang into middle-east politics of influence. He has already lost Iran whom he was trying to appease by signing a nuclear deal again. Now, with Saudi Arabia slipping from USA’s hands, it’ll wipe the entire influence of USA from the middle east for decades to come. The oil dominance for which United States has instigated and fought many wars will be lost forever.