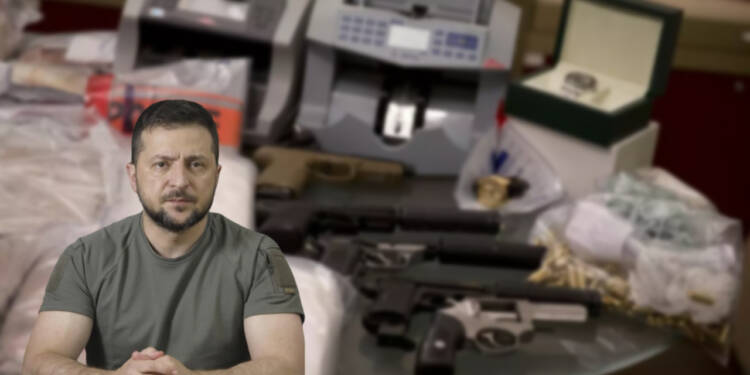 Countries that stood in solidarity with the war-torn Ukraine are now paying a good price for it. They have now realised that aiding Ukraine did nothing but harm their own country and people. The warning bells were ringing ever since the European countries started funnelling funds to arm Kyiv. And what did Zelensky do? He sold the ammunition to criminals to keep his personal wealth growing.

The National Bureau of Investigation (NBI) of Finland reported that it had acquired early evidence suggesting that criminals may have taken the military equipment such as assault guns sent by the western countries to Ukraine.

According to NBI Detective Superintendent Christer Ahlgren, “Weapons shipped [by various countries] to Ukraine have also been found in Sweden, Denmark and the Netherlands.” The European law enforcement organisation Europol reportedly foresaw criminal groups hiding firearms in border regions. This past summer, Europol released a statement (siirryt toiseen palveluun) cautioning that the proliferation of weapons and explosives in Ukraine may increase the amount of weapons and ammunition transported into the EU via well-known smuggling routes or internet marketplaces.

“We’ve seen signs of these weapons already finding their way to Finland,” Ahlgren said. Given that investigations are ongoing, the NBI has not provided any additional information regarding the firearms transported to Finland.

Read More: ‘Gift weapons to Ukraine at your own risk,’ EU’s latest warning to European nations means tragedy for Ukraine

However, Ahlgren claims that the channels and connections for smuggling illicit weapons from Ukraine to Finland are already in place. “Three of the world’s largest motorcycle gangs—that are part of larger international organisations—are active in Finland. One of these is Bandidos MC, which has a unit in every major Ukrainian city,” he explained. “We know that contacts and routes are being warmed up, so that they’re in place.”

Clearly, Zelensky is to be blamed for bolstering the criminal organisations in European countries. The sending of any more tranche of weapons to Kyiv should be immediately discouraged as it is posing a security threat to the helping countries themselves. Just to fulfill his ulterior motives, Zelensky is selling the peace of Europe. Not to mention, Ukraine even sold gold worth billions of dollars with the same motive of keeping its wealth growing.

Needless to say, the war has taken a heavy toll on the country’s economy. Exports have tumbled and the country is now counting on foreign aid and easy loans to keep itself afloat. As per the estimates, Ukraine’s GDP has crashed by at least 45 to 50 percent. Ukraine’s finance ministry announced recently, “The disruption to fiscal cash flows and increased demands on government resources caused by the war has created unprecedented liquidity pressures and debt servicing difficulties.”

The war has choked Ukraine’s economy. It has so far managed to make both ends meet under the West’s auspices. However, as the burgeoning security threat wreaks havoc on European countries, they may soon start developing cold feet on the question of spending billions of dollars in aid to Ukraine. So, Ukraine has now resorted to selling arms and weapons that came as aid from the continent, to earn from them. But this strategy can only delay Ukraine’s defeat in the war, not avert it permanently.