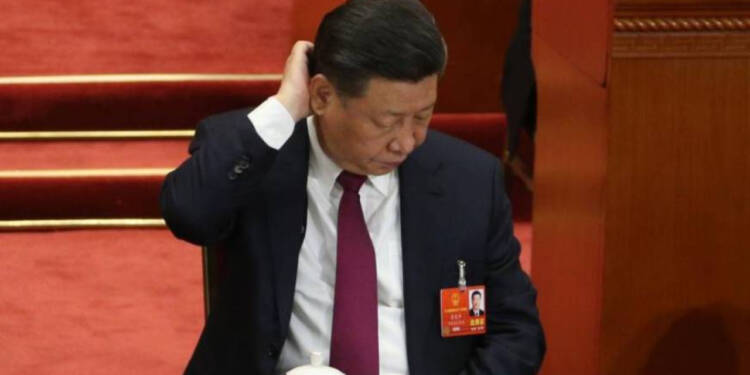 Xi Jinping was elected as the general secretary of Chinese Communist Party for the third time at the 20th Congress. China which was witnessing a major economic development before Xi Jinping’s first tenure in 2012, is all set to doom.

China has aspirations to become a “great modern socialist country” by 2049, the year the People’s Republic of China turns 100. The two-step plan calls for increasing public wealth and doubling the size of the economy by 2035. To bring the goal to fruition, at least 5 percent annual GDP growth was thought to be necessary. If it had enjoyed the same growth, it’d have surpassed the U.S. economy in terms of GDP—valued at $23 trillion versus China’s $17.73 trillion in 2021.

However, the last three years have wreaked havoc with China’s economy because of Xi’s stringent Zero-covid policy and other policies threatening foreign investors. Further, the appointment of his close men, in Politburo rather than experienced economists has further intimidated investors.

Before Covid-19, Xi predicted that the country’s GDP and GDP per capita would have doubled by 2035. But in his most recent statement, he left out the earlier objective. China’s president said, “By 2035, our overall development goal is to significantly increase economic strength, scientific and technological capabilities, and comprehensive national power; substantially grow GDP per capita to reach that of a mid-level developed country.”

In Xi’s report to the CCP’s 20th National Congress, economic researcher Houze Song of Chicago noted Beijing was “quietly abandoning its ambition to become the world’s largest economy.”Both GDP and GDP per capita were originally included in the 2035 target. Song stated, “In contrast, the 20th work report only mentions new milestones for per capita income, not GDP.”

One of the main reasons to abandon the ‘2035 target’ by Xi Jinping is the declining birth-rate and falling working age population more rapidly than anticipated. In other words, the “population bonus” that provided China an advantage is quickly vanishing. While workers from relatively unproductive agricultural industries once moved into more productive mining, manufacturing, and service industries, this dynamic is quickly fading as a result of the drop in the birthrate and the population of people who are working age. It’s called the “Lewis turning point.”

Second, it’s probable that multinational firms would relocate some of their plants from China to other emerging economies as a result of the recent restructuring of the global supply chains. Low-value sectors will relocate to emerging nations where labour costs are cheaper as China’s labour supply starts to decline and labour expenses rise. They will be replaced by a more modern industrial profile. The flying geese model predicts that this will indeed occur.

The middle-income trap explains how, once wages have increased and productivity growth becomes more challenging, countries have a tendency to stall and stagnate at a certain level of development. Only a small percentage of people achieve high income status.

Time is running out for China as for almost 30 years, China has been what the World Bank defines as a middle-income country, with a per capita income between $1,000 and $12,235. South Korea, Taiwan, and Singapore were middle-income economies for 23, 27, and 29 years, respectively, before becoming upper-income economies.

The last word in Chinese politics and economic operations now belongs to Xi Jinping. Companies and countries doing business with China are now concerned about this, and Beijing’s Zero-Covid policy has only increased those fears. As a result, more and more active investors are searching for alternatives.

And if foreign businesses keep leaving, fresh investment may stagnate, which would be detrimental to all the elements needed for China to become a high-income economy. The downturn in Chinese economic activity inhibits the country’s urgently required economic reorientation and worsens its financial instability. And less Chinese economic activity will make sure that China would be forever stuck in the middle-income trap.